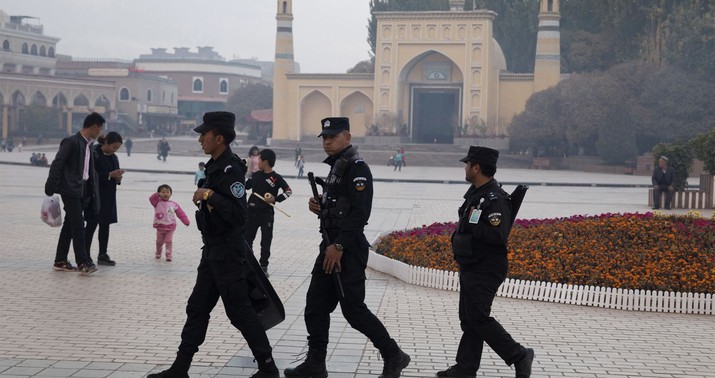 The Times opted for the term “forced labor” in this story for reasons I don’t understand. The oppression of Uighurs by China isn’t limited to telling them which jobs they need to work. The infringement on their liberties is total. Their existence is at the sufferance of Beijing. It’s a full-spectrum slave regime, replete with concentration camps.

And it’s getting worse, not better, as time goes on.

One might think corporate America, normally so quick to flash its woke consciousness during cultural disputes in the United States, would draw the line at honest-to-goodness slavery being practiced by the government of its manufacturing base. After all, some of these companies have devised whole advertising campaigns around the idea that sometimes you need to do what’s right even if it hurts your bottom line:

Believe in something, even if it means sacrificing everything. #JustDoIt pic.twitter.com/SRWkMIDdaO

So why are they on the wrong side of a federal bill that would ban imported goods made by American companies that use Uighur slave labor?

[T]he legislation, called the Uyghur Forced Labor Prevention Act, has become the target of multinational companies including Apple whose supply chains touch the far western Xinjiang region, as well as of business groups including the U.S. Chamber of Commerce. Lobbyists have fought to water down some of its provisions, arguing that while they strongly condemn forced labor and current atrocities in Xinjiang, the act’s ambitious requirements could wreak havoc on supply chains that are deeply embedded in China.

Xinjiang produces vast amounts of raw materials like cotton, coal, sugar, tomatoes and polysilicon, and supplies workers for China’s apparel and footwear factories. Human rights groups and news reports have linked many multinational companies to suppliers there, including tying Coca-Cola to sugar sourced from Xinjiang, and documenting Uighur workers in a factory in Qingdao that makes Nike shoes…

[F]or many companies, fully investigating and eliminating any potential ties to forced labor there has been difficult, given the opacity of Chinese supply chains and the limited access of auditors to a region where the Chinese government tightly restricts people’s movements.

Some companies, like Nike, have already issued statements insisting that they don’t source products from Xinjiang and have found no use of slave labor in their supply chains after conducting audits. The problem is that so many Uighurs are enslaved, with so much obfuscation of their enslavement by Beijing, that they simply can’t be sure if that’s true or not. Reportedly China has moved some Uighurs around the country to work in factories outside Xinjiang in order to solve the problem of a corporate “boycott” of that particular region. The issue, in other words, isn’t so much that American companies are knowingly using slave labor, it’s that there’s *so much* slave labor in China that they can’t be sure that there isn’t any somewhere in their supply chain. If the bill passes they might find themselves in violation of federal law at a moment’s notice after some international agency or major newspaper uncovers Uighur slaves working at a plant somewhere that provides materials to them.

“Firms were already responding [to the bill] by trying to find sources for products outside Xinjiang,” the Times notes, citing a lawyer. The real point of this legislation, I think, is not just to pressure companies to quit Xinjiang but to pressure them into quitting China altogether. That’s the only way they can have full confidence that they’re not using slave labor.

I wonder, though, if to some extent the corporate lobbying efforts are also a matter of PR designed to impress the Chinese government. We saw from the Daryl Morey episode last year that Beijing takes great exception to statements of solidarity with the victims of Chinese human-rights violations by American companies. They were willing to punish the NBA for one tweet by one GM. If Nike and Coke and whoever else got on board with a U.S. pressure campaign to end the enslavement of Uighurs, that might cost them their access to Chinese markets. “Believe in something, even if it means sacrificing everything” was never more than a slogan designed to sell sneakers.

Hopefully the Biden administration will make human rights in China more of a priority than the Trump administration did. As for corporate America, David French is right. If there were a scrap of doubt left that their wokeness is largely a marketing gimmick, this episode should erase it.

Next time one of these corporations tries to sanction a U.S. state for protecting life or religious liberty, remember this story: https://t.co/nAI7pVkfPv