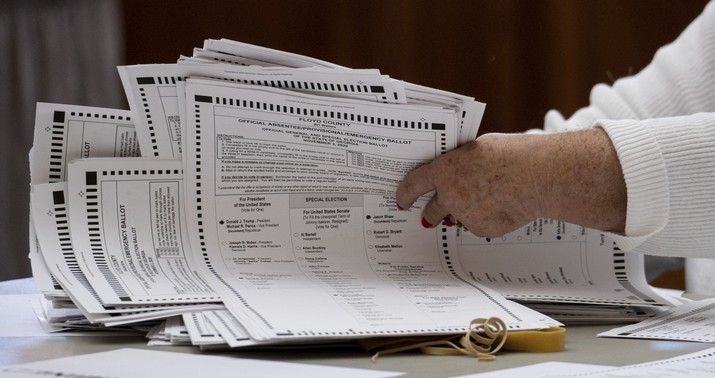 This reminds me of the “data analysis” touted by Rudy Giuliani at his press conference with Sidney Powell that allegedly found many more votes cast in certain Michigan precincts than one would expect based on population. Proof that Biden and the Democrats had rigged Michigan’s election after all? Nah. It turned out those precincts were actually … in Minnesota. In red-leaning areas, in fact. In their haste to delegitimize Biden’s win and give Trump a face-saving claim of fraud to explain his defeat, his lawyers made an error a reasonably competent eighth-grader would have avoided with a bit of diligence.

Same goes for the tweet below from last night, which has more than 61,000 retweets 147,000 “likes” as I write this. How come? Well, our president decided to amplify the claim not once but twice to his 88 million followers, first by retweeting it and then by tweeting it out again with a sensational accusation of fraud attached.

Whether Trump or Doug Mastriano are knowingly lying to people at this point or so intoxicated with paranoia that they’re willing to latch onto any claim of fraud without taking two minutes to check it, we’ll never know. My guess is that Mastriano’s a willing liar hoping to ingratiate himself to the president while Trump is operating in his usual gray zone of lunging at whatever garbage information floats past his eyeballs without caring whether it’s true or not.

This was posted on our Department of State dashboard but had since been deleted. pic.twitter.com/bDmvCK0kDB

The 1,126,940 votes were created out of thin air. I won Pennsylvania by a lot, perhaps more than anyone will ever know. The Pennsylvania votes were RIGGED. All other swing states also. The world is watching! https://t.co/zmnk34Ny23

Pause here and consider what you’d need to believe in order to take Mastriano’s claim seriously. If 1.5 million mail-in ballots were returned but somehow 2.6 million mail-in ballots were counted, we’re talking about fraud to the tune of more than a million votes. A million votes. Mastriano presumably also believes that all or nearly all of those phony 1.1 million ballots were marked for Biden since Biden would have needed virtually all of them to overtake Trump and finish with his final margin of victory of 80,000 votes or so.

In other words, Mastriano wants us to believe that Biden received only 2.3 million legitimate votes in Pennsylvania plus the 1.1 million fraudulent votes that put him over the top. That would mean he underperformed Hillary Clinton by 600,000 votes in the state, as she got 2.9 million in PA in 2016. It would also mean that Trump, who defeated Clinton in Pennsylvania by just 44,000 votes and less than a percentage point four years ago, utterly crushed Biden there this time. Under Mastriano’s theory, the president won the state with something like 58 percent of the vote while Biden limped to the finish line with just 40 percent or so. That would mean total turnout in Pennsylvania *declined* this year from 2016 even though turnout broke records everywhere else in America.

Does that seem plausible? Biden, who was born in Pennsylvania, is better liked than Hillary, and who overperformed Clinton in many other blue districts across the map, got obliterated in a purple state which Trump barely won four years ago?

Here’s the page: “2020 Primary Election Mail Ballot Requests Department of State.” Note the word “primary.” Scroll down there and you’ll find a database of 1.82 million people who requested a mail ballot for the primary, precisely matching the number cited by Mastriano for mail-in ballots requested in the general election. He’s looking at the wrong page.

As I say, an eighth-grader capable of googling would have caught this error. After all, a week before the general election, the AP reported that more than three million ballots — not 1.8 million — had been mailed out to voters in Pennsylvania. Michael McDonald, a professor at the University of Florida, was tracking mail-in ballots in all 50 states for weeks before Election Day as the state numbers were updated. Here were his final totals for Pennsylvania:

3.1 million mail ballots requested, 2.6 million mail ballots received in the general election. The explanation for the “discrepancy” found by Mastriano is that there’s no discrepancy. He was looking at the mail ballot numbers from the primary, not the general election, and spun up a completely ludicrous conspiracy theory to explain why he couldn’t get them to match. It’s an even more embarrassing error than the Michigan/Minnesota screw-up I mentioned up top.

But it’s too charitable to describe it as an “error.” I think this is deliberate disinformation being pushed by Mastriano to try to build grassroots support for overturning the election results:

There is mounting evidence that the PA presidential election was compromised.  If this is the case, under Article II, Section 1.2 of the US Constitution, the state legislature has the sole authority to direct the manner of selecting delegates to the Electoral College. (1)

Therefore, we are introducing a Resolution to exercise our obligation and authority to appoint delegates to the Electoral College. (3)

This tool is trying to nullify upwards of three and a half million votes for Biden by handing the state’s electors to Trump, apparently with the president’s full support:

So much credit to all of the brave men and women in state houses who are defending our great Constitution. Thank you!

In a country less diseased than ours, their willingness to manufacture a pretense of fraud that could be debunked by a 10-year-old to justify voiding an election would render them unelectable in any future runs for office. As it is, I assume Mastriano has his eye on running for higher office — governor, maybe? — and has calculated that telling a brazen but pleasing lie to the president and his fans about what happened in Pennsylvania will give him a leg up in a primary. He’s probably right. Having proved his loyalty to Trump by the lengths to which he’s willing to go to bullsh*t the president’s supporters, Trump is all but guaranteed to endorse him in whatever he chooses to do next.

I’ll leave you with this vignette from today’s appearance by RNC chair Ronna McDaniel in Georgia. The more the crankery from the top continues, the dicier things get for Kelly Loeffler and David Perdue in the upcoming Senate runoffs.

Another person asks- “Why should we vote in this election when we know it’s already decided?”
McDaniel responded- “It’s not!”
(This btw.. is the GOP’s worst nightmare in Georgia).

McDaniel is now pleading with the crowd to focus their energy on the Senate race and promises of they will worry about Election fraud issues “later”.