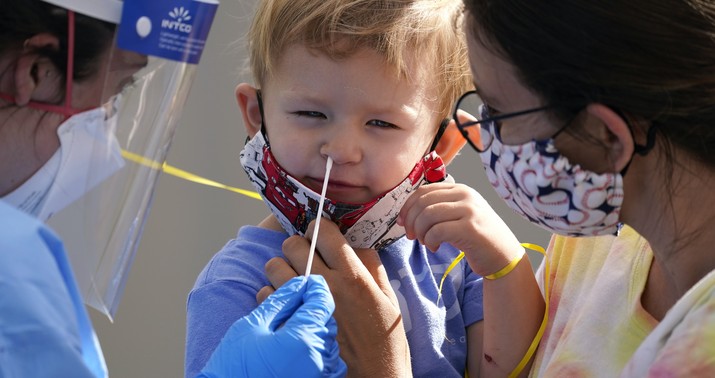 It’s jarring how we’re getting the worst news of the pandemic and the best news all at the same time. On the one hand, cases have climbed past 150,000 per day and hospitalizations are at record levels, with deaths likely soon to follow. The disease is no longer happening in regional waves either. The entire country’s in the soup, which means doctors and nurses can’t be moved around to help out in harder-hit areas. To make matters worse, Americans are about to throw caution to the wind and host extended family gatherings for Thanksgiving, pouring fuel on the flames. It’s a disaster.

"This is going to get very bad, very quickly."

"I can't believe that we're here."@chucktodd: "Health care workers across the country are pleading with us to heed their warning." pic.twitter.com/XipfgPBbz7

Meanwhile, Pfizer and Moderna just reported that their vaccines are more than 90 percent effective, beyond the wildest dreams of epidemiologists. And new data noted today by the Times indicates that immunity from COVID is probably very durable, making the task of beating the disease that much easier. A world in which we all need to be vaccinated, say, every three months to stave off the virus is a logistical nightmare. A world in which we may only need to be vaccinated every few years is much simpler.

Put it all together and it’s as if the wretched year 2020 is trying to give birth to something better. A joyous day is coming, but agony comes first.

Eight months after infection, most people who have recovered still have enough immune cells to fend off the virus and prevent illness, the new data show. A slow rate of decline in the short term suggests, happily, that these cells may persist in the body for a very, very long time to come…

“That amount of memory would likely prevent the vast majority of people from getting hospitalized disease, severe disease, for many years,” said Shane Crotty, a virologist at the La Jolla Institute of Immunology who co-led the new study…

And the research squares with another recent finding: that survivors of SARS, caused by another coronavirus, still carry certain important immune cells 17 years after recovering…

A study published last week also found that people who have recovered from Covid-19 have powerful and protective killer immune cells even when antibodies are not detectable.

The immune cells in the body that remain after infection wouldn’t necessarily prevent you from being reinfected in the future, the Times notes, but they should be enough to prevent illness. And because the coronavirus is comparatively slow-moving, it may be that people who get reinfected are able to squelch the virus before they become infectious to others. Reading that made me think of Rand Paul, a COVID survivor, complaining recently that people who’ve recovered from the disease should be encouraged to go back to their pre-pandemic lives:

No doubt, the government would need to reach an accommodation on that point in a world without a vaccine, where the ranks of survivors gradually grew month by month, year by year. Immunity “passports” would need to be issued to let people who’ve had the disease function with fewer restrictions than others. As it is, even after the brutal winter we’re facing, probably only something like 10-15 percent of the population will have had COVID by the time the vaccine is widely available. If Paul wants to take off his mask and party, no one’s stopping him; plenty of people who haven’t had COVID are doing that, at great risk to themselves and others. But no scientist is going to take a “go party” position under the circumstances when (a) today’s data on long-lasting immunity needs more study, (b) people who aren’t immune are destined to let down their guard because of it, and (c) many millions of us are mere months away from safe, vaccine-supplied immunity. In fact, Pfizer’s CEO told an audience this morning that his company’s in the process of submitting its application for emergency use authorization to the FDA right now. The cavalry’s almost here. All we need to do is hang on.

Instead, the message from the de facto leader of the federal COVID task force is to invite grandma over for the big Thanksgiving celebration. We’ll call this segment “Atlas shrugs”:

Trump COVID-19 adviser Scott Atlas says people ought to visit their elderly relatives for Thanksgiving despite the pandemic because "for many people this is their final Thanksgiving, believe it or not." pic.twitter.com/ta1rEIBawO

When he’s right, he’s right: For many of America’s elderly, this will be their last Thanksgiving. The contagion spread by these foolish family gatherings will guarantee it.

Speaking of which, isn’t Atlas’s “herd immunity” approach to the virus contingent upon *shielding* the elderly from the rest of the population while letting healthy people go about their business? How the hell does that jibe with inviting the grandparents over for a big group get-together indoors stretched over many hours at a moment when COVID cases are higher than they’ve ever been?