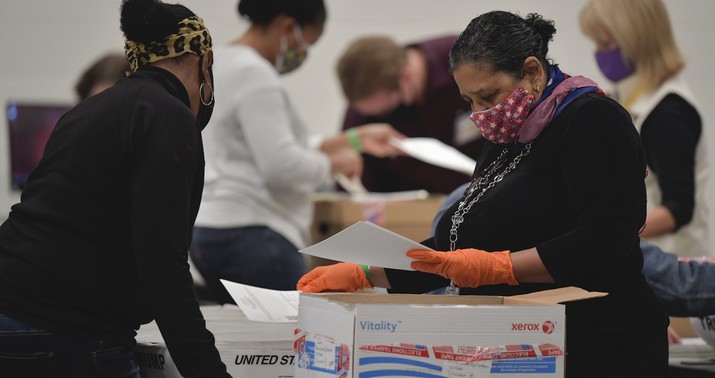 It’s touching that this guy continues to try to prove that his state’s election was clean, knowing full well that the defining characteristic of conspiracy theories is that they’re unfalsifiable. There’s literally no authority on Earth that could examine the Dominion machines and give them a clean bill of health such that Trump would say, “I stand corrected.” On the contrary, “Trump has become personally obsessed with the baseless Dominion claims and has asked campaign officials as well as national security officials in the government about the company, the advisers said,” according to WaPo. He started with a conclusion, as he normally does — I could only have lost Georgia if I was cheated — and then “reasoned” backwards to whatever predicate would justify that conclusion. Trump lost, so the machines must have been rigged.

Pro V&V, based in Huntsville, Alabama is a U.S. Election Assistance Commission-certified Voting System Test Laboratory (VSTL), meaning the lab is “qualified to test voting systems to Federal standards.” VSTL certification is provided for under the Help America Votes Act of 2002. Pro V&V’s accreditation by the USEAC was also recommended by the National Institute of Standards and Technology (NIST), the U.S. government’s physical science laboratory dedicated to creating standards and measures that would help America be the leading science innovator in the world. NIST contributes regularly to the development of cybersecurity and elections security standards for the U.S. and the world.

Pro V&V conducted an audit of a random sample of Dominion Voting Systems voting machines throughout the state using forensic techniques, including equipment from Cobb, Douglas, Floyd, Morgan, Paulding, and Spalding Counties. ICP (precinct ballot scanners), ICX (ballot marking devices), and ICC (central absentee ballot scanners) components were all subject to the audit. In conducting the audit, Pro V&V extracted the software or firmware from the components to check that the only software or firmware on the components was certified for use by the Secretary of State’s office. The testing was conducted on a Pro V&V laptop independent of the system.

According to the Pro V&V audit, all of the software and firmware on the sampled machines was verified to be the software and firmware certified for use by the Office of the Secretary of State. Coupled with the risk-limiting audit of all paper ballots relying solely on the printed text of the ballots, these steps confirm the assessment of the Cybersecurity and Infrastructure Security Agency that there are no signs of cyber attacks or election hacking.

The secret to Biden’s win in Georgia is actually no secret. Nate Cohn looked at the results in detail today and found that they confirmed exactly what everyone expected before the vote, that suburbanites were tilting blue this year and might make the difference for Sleepy Joe in close states. Go look at the map he created showing voting trends by county and you’ll find a blue belt around Atlanta. That’s what delivered the state for Biden. For all the hype about Stacey Abrams’s turnout machine, it wasn’t black voters who came through for the Dems; as a share of the electorate, their numbers dropped a few crucial points since Abrams’s race in 2018. Suburbanites picked up the slack for Dems, though. In areas where a majority of residents are college grads, the vote was six points bluer this year than it was in 2016.

In fact, notes Harry Enten, Trump’s “I was cheated” theory is deliberately blind to his performance with suburbanites. He and his supporters keep pointing to urban areas like Philadelphia as the engine of Biden’s victory and therefore the likeliest places where vote-rigging occurred. That’s simply not true. Biden *did* outperform Hillary in 31 of 36 urban counties located in swing states, contrary to popular belief among some righty populists. (Ironically, Philly was one of the five where he underperformed Clinton, making it even less likely as a locus of voter fraud.) But the voters who turned most decisively on Trump were suburbanites. In Wisconsin, notes Enten, the suburbs around Milwaukee handed Biden 25,000 more votes than they handed Hillary, enough to make the difference in the state. If Trump were seriously worried about fraud instead of just lashing out willy nilly to discredit Biden’s win, he’d be less focused on cities and more on the counties surrounding them.

And if he were seriously worried about winning, he would have knocked off the nonsense conspiracy-mongering about mail-in ballots many months ago, when every state and local Republican official in the country was begging him to. Raffensperger thinks that, not the Dominion machines, was the real reason why he lost Georgia:

In new intv with me, @GaSecofState says 24,000 GOPs who voted absentee in primary did not vote in General – says Donald Trump cost himself the election by sowing distrust in absentee: "he would have won by 10 thousand votes he actually suppressed, depressed his own voting base"

For what it’s worth, dozens of computer scientists and cybersecurity experts are issuing a letter today affirming CISA’s assessment that there’s no evidence of election tampering in any voting machines. Won’t do a lick of good to convince people who refuse to accept that Trump lost fairly, but the effort is appreciated. Meanwhile in Georgia, David Perdue and Kelly Loeffler are wrestling with a problem that’s bedeviling the entire Republican leadership class but posing special difficulty for them. Namely, how do you acknowledge the basic reality that Trump lost without alienating the president and the voters who’ll believe anything he tells them?

Most striking was the way the senators nodded toward the likelihood of Biden’s presidency. While Trump keeps insisting that he won the election, making baseless claims of voter fraud and mounting legal challenges, Republicans on the call privately cast those efforts as an understandable but potentially futile protest.

“What we’re going to have to do is make sure we get all the votes out from the general and get them back out,” Perdue said of core Republican voters. “That’s always a hard thing to do in a presidential year, particularly this year, given that President Trump, it looks like now, may not be able to hold out.”…

Perdue’s delicate approach — standing with Trump, but also privately acknowledging that the president’s time in power could be waning and that he carries possible political liabilities — extended to others on the call who tried to balance their loyalty to Trump with their apprehension about what is needed in Georgia to save the GOP Senate majority. It is revealing of the Republican dilemma in the winter of Trump’s presidency, with fear of offending him and his fervent supporters hovering over a cold political reality.

The best thing that could happen to Perdue and Loeffler would be the states certifying their results, Trump throwing in the towel, and then the party uniting behind them to make sure that Democrats don’t regain total control of government by winning the two Georgia Senate runoffs. What’s going to happen, though, is Trump will keep doubling down on the “I won” messaging after certification, Perdue and Loeffler will be forced to awkwardly hedge or avoid that topic altogether, and the suburbanites who delivered Georgia to Biden will get pissed off at POTUS again. Possibly for that reason, more Senate Republicans have begun to make noises about Biden having won the election. Marco Rubio’s now referring to him as the “president-elect” and there’s a bit more vocal support among his colleagues for starting the transition process. Even Lindsey Graham, who’s been open to the idea of states tossing their election results on fraud grounds and certifying their electors for Trump, is sounding more resigned lately:

GRAHAM: "We are at the point now where recounts are going on and it’s now time to put it up."

Q: What’s the standard in your mind for saying Biden is president-elect?

GRAHAM: "When Trump concedes or the court cases have been dismissed and the states certified." 2/4

Q. The electors don’t need to cast their votes to convince you?

Is Graham sure that certification is enough? I’d bet anything that Trump will keep filing lawsuits, maybe start leaning on state-level Republicans to award him their electors, maybe try to pressure the electoral college to support him when they vote. All of that is a month away; certification is a week or two away depending on the state. That means Graham and the Senate GOP will be at odds with Trump on his ultimate loyalty test for weeks at a moment when the president is still futilely contesting the election. How are they going to get through that and hold the party together all the way until January 5, when Georgia votes?

'Facts matter': Ted Cruz breaks out the puppets and crayons to SCHOOL Alyssa Milano in back and forth about Dems blocking COVID relief