Is Biden going to cancel some student loan debt via executive order? 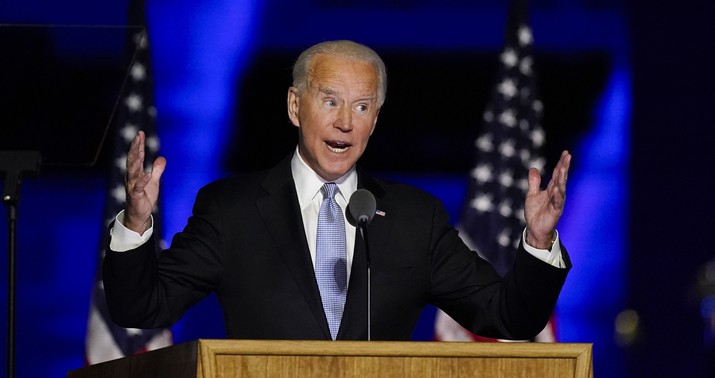 Reading this story, I’ve had a sudden change of heart. Democrats did rig the polls to get Sleepy Joe elected.

I don’t support student-loan forgiveness, as I’ve explained before, and I really don’t support doing it by executive order. And the caliber of people whom I find on the other side of the debate isn’t shaking my conviction:

On Election Day, before the votes had even been counted, Chuck Schumer chattered to reporters about Biden canceling the first $50,000 of each student debtor’s outstanding loans with the stroke of a pen. That number came from Elizabeth Warren’s primary campaign — a weird idea for a populist given that it would disproportionately benefit the credentialed professional class, people who’ll eventually earn enough to pay those loans back. Biden’s primary campaign countered with a cap of $10,000 in forgiveness and tied it to COVID, along with forgiveness for anyone earning less than $125,000 who amassed their loans at a public university.

If we’re going to start handing out free candy to the relatively well-off, at the very least we should insist that members of Congress take ownership of the policy via a floor vote. Letting a president who’s probably only going to serve a single term do it by fiat will only deepen the ferocious resentment that a move like this will cause:

Mr. Biden’s plan faces other challenges. The campaign hasn’t specified how he would pay for debt forgiveness, although he has separately called for tax increases of about $4 trillion over a decade to pay for a variety of programs…

There are also potential tax consequences. Generally, forgiven debt of any kind is considered taxable income by the Internal Revenue Service. Forgiving huge portions of debt could lead to thousands of dollars in tax bills for individual households.

And without restrictions on new lending, the U.S. would risk another run-up in student debt.

The story notes that Trump’s much less aggressive executive action this past summer, in which he postponed student loan payments due to the pandemic, was itself attacked as illegal because the power of the purse is supposed to belong to Congress. Imagine Biden trying to do something far more draconian, effectuating a permanent loan forgiveness of hundreds of billions of dollars, without legislative input. Which makes me wonder: Is this idea just “gesture politics”? I.e. Biden signs the order forgiving debt, Republicans leap to their feet in outrage, and a conservative SCOTUS squashes the order as a violation of separation of powers. Then Biden and the Dems get to boo-hoo over how mean the right is in insisting that younger Americans who are still carrying debt fulfill their obligations.

In theory, that could help cement Democrats’ appeal to the suburban voters who put Biden over the top this year. Many of them are college grads, many of them are carrying student loans past their 30s. President Joe wanted to give them free candy and the evil GOP took it away! But that seems too clever by half. If you’re a college grad who’s already paid off their debt — or if you’re *not* a college grad and want to know where your free candy is — you’ll be furious. The polling on this issue is mixed but it boggles my mind that Biden might waltz into office in the midst of a pandemic, having positioned himself during the campaign as a healing, unifying figure, and pull a move as bitterly divisive as this to start his presidency.

Especially if it’s not part of a package in to reform how higher education is financed, which would also require congressional buy-in. Loan forgiveness without a way to control costs going forward means we’re destined to do this again in five years or 10. In fact, as Brian Riedl says, a massive loan forgiveness program might actually incentivize universities to hike tuition further in the expectation that Uncle Sam will pick up the next tab too. We’ll end up in a cycle of de facto “bailouts” of academia even though many schools are sitting on exorbitant endowments.

The strongest argument for near-term student loan forgiveness is the stimulus effect of letting debtors keep more of their money each month instead of paying it back to creditors. The U.S. economy is in a hole because of COVID and having extra cash in circulation could help dig us out. But there are problems. Jason Furman, who worked under Obama, notes that the tax liability incurred in debt forgiveness would itself have to be forgiven or else the benefit is lost:

Forgiveness is taxable. If this negative cash flow effect outweighs interest savings would even be net negative. And wealth effect small in short run.

Arbitrary/regressive $1T for ~$0 GDP, not a great idea.

Even without the tax effect, says lefty Matt Bruenig, “if we are being honest about things, student debt forgiveness is possibly the least effective stimulus imaginable on a dollar-for-dollar basis”:

Normal stimulus measures try to put money in people’s pockets so that they can spend it. But student debt forgiveness does not do this. It’s like giving out $1+ trillion that is then immediately garnished by creditors, leaving households with no extra liquid cash to spend.

We already got the stimulus benefit from loan forgiveness via Trump’s order postponing repayments. I understand why Warren and AOC might want class warfare on day one of the Biden administration but I can’t imagine why Biden would. His agenda should be COVID, COVID, and nothing but COVID until the vaccination machinery is really rolling sometime next summer. If he wants to pull the pin on the resentment grenade by forgiving student loans after that, knowing that it’s all but certain his order will be tossed out in court and he’ll have gained nothing by it, that’s up to him. It’s not like Republicans tend to do well in midterms running against Democratic fiscal policy.

'Facts matter': Ted Cruz breaks out the puppets and crayons to SCHOOL Alyssa Milano in back and forth about Dems blocking COVID relief