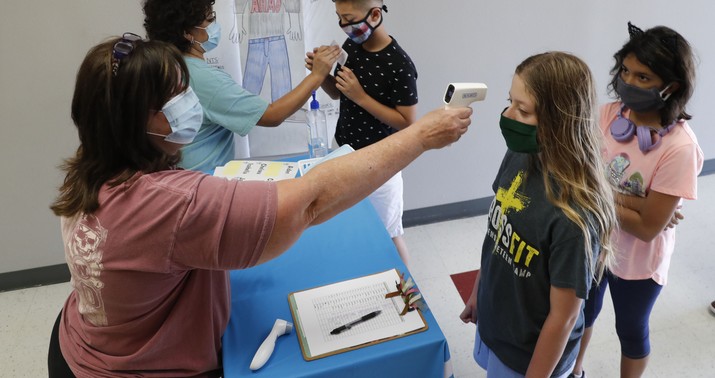 This comes from Trevor Bedford, who was one of the first scientists in the country back in February to claim via statistical analysis that “invisible” community spread of coronavirus had already begun in the U.S. Within a few weeks, the spread was no longer invisible.

His point today is straightforward. It takes about three weeks for a severe case of COVID to proceed from the point of infection to death; thus, based on the case fatality rate so far, we can guesstimate how many deaths there’ll be on a given date based on how many new cases there are on a given date three weeks earlier.

And there’s really nothing we can do to avert those deaths. We can save some lives at the margins via drugs like dexamethasone but the crop of positive tests today will produce a roughly proportional crop of deaths three weeks from now. To drive down the death toll the day after that, we have to drive down the number of infections tomorrow. There’s no other way.

This can be seen across states where the solid lines show reported cases by date of report and dashed lines show reported deaths lagged by 22 days. You can see some detailed correspondences, especially in states experiencing the summer surge like Florida, Arizona and Texas. 4/8 pic.twitter.com/iX1m4faYzO

I expect the US to be reporting over 2000 deaths per day in 3 weeks time. Importantly, this doesn't assume any further increases in circulation and is essentially "baked into" currently reported cases and represents conditions that take time to resolve and to be reported. 8/8

Baked in. We’ve topped 2,000 daily deaths before, but that was at the peak of the first wave this spring. There’s no reason to think we’re at the peak of the second wave now. We’re still climbing the epidemiological curve. We may reach a daily death toll — daily — on the order of 9/11 sometime in December. And as the number of daily cases rises, the number of people needing hospital care will rise too. Once hospitals are maxed out, the case fatality rate will also rise because some people who could have been saved if they had dedicated hospital care won’t be able to get that care.

There’s no telling where this goes.

In case you still think there’s hope for this country, enjoy this Washington Post piece that drills down on why cases are exploding right now. It’s not because front-line workers like supermarket cashiers are forced by the vagaries of their jobs to risk spreading infection. It’s because many Americans simply refuse to sacrifice a particular form of … fun. Even for a few more months.

A record-breaking surge in U.S. coronavirus cases is being driven to a significant degree by casual occasions that may feel deceptively safe, officials and scientists warn — dinner parties, game nights, sleepovers and carpools.

Many earlier coronavirus clusters were linked to nursing homes and crowded nightclubs. But public health officials nationwide say case investigations are increasingly leading them to small, private social gatherings. This behind-doors transmission trend reflects pandemic fatigue and widening social bubbles, experts say — and is particularly insidious because it is so difficult to police and likely to increase as temperatures drop and holidays approach…

Timothy McDonald, public health director in the Boston suburb of Needham, said he is considering a campaign centered on the idea of a “social budget,” reminding residents that, according to guidance from the Centers for Disease Control and Prevention, they should avoid spending more than 15 minutes within six feet of most other people in a 24-hour period.

This moron is a city councilman in New York. He’s a member of the country’s leadership class. This is his message for the holidays with 2,000 daily deaths already baked in and doctors jittery about small private social gatherings driving the explosive spread of the virus. Thanksgiving this year will be gasoline on a raging fire if people follow his advice:

I'll be having more than 10 ppl at my house on Thanksgiving. My address is public record. Some family will come from (gasp!) New Jersey.

Kids will see their grandparents, cousins will play in the yard, sis in law will bring strawberry rhubarb pie, & a turkey will be overcooked.

Think of the age we live in. Not only do we carry devices that let us talk to anyone we like at a moment’s notice, those devices let us *see* the person we’re talking to. We can have face-to-face conversations with relatives located thousands of miles away, at any time of day or night. Essentially for free.

We also live in an age where scientific medicine is so fantastically advanced that a vaccine to rid us of this terrible novel disease will arrive within a year of the virus’s emergence. Anthony Fauci predicted yesterday that it would be available to the general public by April, around 12 months after COVID first ravaged American cities. And not only will the vaccine be available, if Pfizer’s preliminary data holds up it’ll be effective beyond our wildest dreams. Doctors were hoping for 50 percent efficacy, on par with the annual flu shot. Pfizer’s promising 90 percent. We’re going to crush this disease next year, in a miraculously short time.

All we need to do is avail ourselves of the 8,000 means of virtual communication with other people that we enjoy in 2020 in lieu of actual in-person communication.

And we can’t do it. By the time this is over, the U.S. death toll from COVID may exceed the U.S. death toll from World War II. Saying that you can’t skip dinner parties, or going out to restaurants, because you’re “tired” of social distancing would be like people responding to the government’s admonitions during the war that “loose lips sink ships” with “But … I need to gossip. for It’s human nature.”

“I’ve avoided gossipping for seven months and, well, I just can’t take it anymore. Time to let down my guard.”

And again: This is the attitude people have knowing the vaccine is near. There’s light at the end of the tunnel, but they’re going to steer into the wall anyway. A response to Borelli:

It's incredibly frustrating to see people who lionize the sacrifice and courage of Americans throughout history, but when faced with making a much smaller sacrifice in a time of national crisis, flaunt their disdain for the well being of their fellow countrymen. https://t.co/ZtZv7bEyD2 pic.twitter.com/Pmcv4XOOv9

Ari Schulman asks a good question. Is there some level of daily deaths at which Americans would say, “Hmmm, maybe having 20 people over for this party *isn’t* more important than containing the spread”? Or are we sticking with a collective “let ’em die” sociopathy even if deaths reach 3,000 or 4,000 per day?

Our leaders have failed us too. The president’s main interest in COVID right now seems to be settling scores with the — and I quote — “medical deep state” because Pfizer’s vaccine data didn’t come out before the election, when it might have helped him. Congress isn’t even pretending to be working on a stimulus bill even though rescue money for bars and restaurants would give local officials the ability to shut those businesses down over the winter while keeping them afloat financially for spring. In New York City, where case rates remain low but are rising, the government is thinking of closing … schools, even though schools seem to be one of the safer indoor spaces that are operating. The latest data from the Brown University study of infection rates in schools found a *decline* in cases over the last two weeks of October:

If you’re looking at that and thinking that Cuomo and de Blasio are morons for wanting to close schools, well … yes, you’re right. They are morons, as the last seven months have established over and over again. But it’s not moronic for city and state leaders in New York and elsewhere to feel like they need to close *something* down to try to douse this inferno that’s begun to rage. Ideally they’d close businesses instead and let kids go to class, but again, Congress hasn’t given them that option. Closing a business now means dooming it to failure, in all probability.

So they’re going to let businesses stay open and give us the worst of all worlds, in which there are still enough customers for those businesses near-term to make them vectors of transmission and further community spread but not enough customers over the medium-term to keep those businesses afloat as people start to get truly frightened about the state of the pandemic and begin self-isolating again. The businesses will die, with no relief from the federal government to save them. What a pitiful, dysfunctional country we have.

Here’s Fauci dodging questions about a lockdown by saying that we can contain the virus through better precautions. But we can’t, right? The people who can’t bear a few more months without dinner parties will hold those parties whether we shut down bars or not. Everyone knows what precautions to take by now. Fun is more important.

“The best opposite strategy to locking down is to intensify the public health measures short of locking down.”

Dr. Fauci speaks on the COVID crisis and the possibility of a second lockdown as U.S. cases soar to new records. https://t.co/U6hIuaJiY1 pic.twitter.com/FmZpA2mpWj