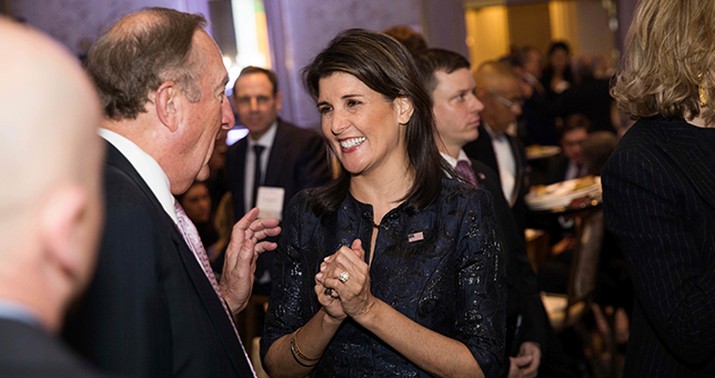 In her defense, this is a lot more subtle than Ronna McDaniel flatly stating in a tweet yesterday that Kamala Harris will be the deciding vote in the Senate if Democrats win the two Georgia runoffs.

But Haley’s more fun for Trumpers to hate on because she’s clearly not a populist and will doubtless be the choice of establishment Republicans whenever she ends up running for president. Some Trump lackeys have already attacked her for sounding too pessimistic about the president’s “voter fraud” crusade to overturn the election, in fact.

Consider this another example of what I described last night as “Schrodinger’s election” in Georgia, one in which Trump both is and isn’t likely to be president on January 20. He’ll prevail in court and be vindicated as the victim of the greatest fraud operation in human history! But Kamala Harris will also be Chuck Schumer’s tiebreaking vote in the Senate if the two Georgia seats turn blue!

Someone in the GOP needs to come up with a scenario in which Congress ends up deciding who the next president is and Trump ends up winning with Harris as his VP in a compromise. Then they can argue both the “Trump won” and “Harris as tiebreaker” positions in Georgia without sounding idiotic.

If the two Georgia seats flip and we get a 50/50 Senate, the vice president’s party would have control. Unless Haley thinks Mike Pence is going to put Bernie in charge of the budget, then it’s clear who she thinks the president will be.

Apropos of nothing, despite Biden’s victory in Georgia and the tight-ish margin of David Perdue’s lead over Jon Ossoff on election night, I find myself thinking that both runoffs are in the bag for the GOP. In a more rational world, having Trump spend two months claiming that Georgia’s electoral system is corrupt and that the result was determined by fraud should discourage Republican voters there from turning out. In reality, I think righties will lay that aside and turn out en masse to show Democrats that Georgia’s still a red state. (Again, Schrodinger’s election: The GOP base believes that Dems are rigging outcomes but goes all-out to beat them anyway.) Both Georgia Dems seem lackluster too, with oppo on Raphael Warnock revealing him to be more radical than thought and Jon Ossoff a perfectly dismal garden-variety progressive. Winning these races can’t be very hard, can it?

But then you reflect on the fact that (a) total control of government is on the line for the left, (b) they have a bottomless money machine in terms of fundraising, and (c) they *just* proved that they can win in Georgia in a race with the highest possible stakes. Granted, it took the ultimate generic, centrist, known-quantity Democrat in Joe Biden to pull that off, an advantage that Ossoff and Warnock don’t have. But still — it *should* be very, very close.

So why do I have the feeling it won’t be? Maybe it’s just force of habit in taking Georgia for granted as a red state.

I wouldn’t worry about Perdue and Loeffler losing. I *would* worry about Brian Kemp in 2022. Word from the Daily Beast today is that Stacey Abrams will take another run at him for the governor’s seat, which was all but assured after Biden proved that a Democrat really can win statewide. Every Democrat of any rank in Georgia has credited her with building the turnout machine in 2018 that ultimately led to Biden’s victory last week. And she’s been a rising star on the left ever since she narrowly lost to Kemp two years ago. Progressives want a rematch, this time believing that demographic change and a ground game that’s proved it can deliver wins will be the difference this time:

“Stacey Abrams intends to run for governor again,” said Wendy Davis, a Democratic National Committee member who is on the executive committee of the Georgia Democratic Party. “I think that is a secret to no one.”…

Davis noted that a gubernatorial primary will take place to unseat Republican Gov. Brian Kemp, but that Abrams is considered to be the presumed frontrunner for the nomination—even without announcing a bid—among plugged-in Georgia Democrats.

“Everyone in Democratic circles has the expectation that she will be the Democratic nominee in two years for governor,” she said.

A Twitter pal noted earlier that this’ll be a nice test case for Trump ahead of 2024 to see if a candidate who refused to concede after losing their previous election can win again. I don’t think she’s a sure thing to win, partly because she was so obnoxious in declining to offer that concession and partly because Georgia Republicans would relish snuffing the career of one of progressivism’s alleged future stars by beating her again at home. But there’ll be lots of energy and lots and lots of money behind Abrams. And there may not be a ton of Trumpist energy behind Kemp. Kemp already rubbed Trump the wrong way when he appointed Kelly Loeffler to the Senate over Doug Collins; now he’s watched his state turn blue in 2020, crippling Trump’s presidential hopes. If Trump ends up helping him, it’ll be an act of pure self-interest: If the president runs again in 2024 and tries to retake Georgia, having Kemp as governor will obviously be preferable to having Abrams in charge.

Here’s your exit question, playing off the absurd idea of a Trump/Harris administration: Is there any particular reason why Trump would choose Pence as his running mate again if he runs in 2024? There’s a story in the NYT today about Pence needing Trump’s support now and going forward to keep his own presidential hopes alive, but what does Trump need Pence for? He chose him again as VP this year as a matter of simple continuity. He chose him in 2016 to help him gain credibility with evangelicals, but he no longer needs Pence for that. He has more fans among Christian Republicans than Pence himself does at this point. Why not dump Pence and choose, well, Haley? Or Kristi Noem, to give him a little gender diversity on the ticket and possibly help him in the suburbs?