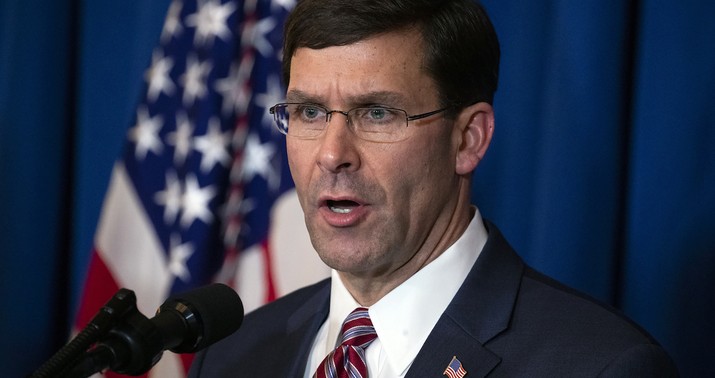 One never knows whether an official who’s been “fired” by Trump was actually fired or whether they resigned and Trump then retconned their departure as a firing to preserve his image of “dominance.” (Ask John Bolton about that.) It was reported a few days ago that Mark Esper had prepared a letter of resignation, potentially to be submitted at some as yet undetermined time.

But I tend to think Trump really did pull the trigger on this one. For one thing, rumors have been swirling for more than a week that Esper (along with Chris Wray and Gina Haspel) was in his crosshairs. And Esper presumably would have stayed on for the final 70 days of Trump’s administration simply as a matter of duty, to ensure stability at the top of the Pentagon. If he “resigned,” it must have been that his resignation was demanded.

Trump probably needs a few firings at this point to soothe him after losing the election. It’s deeply weird for a lame-duck president to dump a top cabinet member when he’s running out the clock but everything happening around Trump right now is a function of his feelings having been hurt by the electorate. It’ll make him feel better to humiliate deputies who weren’t abject toadies for him during his presidency.

…Chris will do a GREAT job! Mark Esper has been terminated. I would like to thank him for his service.

I’ve lost track of what Esper said or did to make Trump hold a grudge against him. Reportedly he regretted having participated in the president’s Lafayette Park PR stunt back in June and opposed invoking the Insurrection Act to send regular troops to battle rioters, which makes Esper two for two on questions of basic civics. Make that three for three, actually:

As his tenure may be coming to an end, Esper is helping members of Congress draft legislation that will strip names of Confederate leaders from military bases in a move that could put him further at odds with President Donald Trump.

While Esper considered issuing a directive that would order the secretaries of the Army, Navy and Air Force to change the names in their respective services — an order that could be overturned by Trump, who has strongly opposed renaming bases — he now plans to work with Congress to put language in the annual National Defense Authorization Act, or NDAA, so the name changes will be written into law.

Wanting to take the names of Confederate traitors off of U.S. military bases may have been the last straw. For Esper, that’s a high note on which to leave.

As for Christopher Miller, just because Trump says he’s the new acting secretary doesn’t make it so as a matter of law — and if you’re worried about what Biden’s cabinet might look like, I’d be careful about siding too strongly with Trump here:

There’s currently a Senate-confirmed Deputy Secretary of Defense — David Norquist. Under 10 U.S.C. § 132(b), *he* is supposed to become Acting Secretary in the event of a vacancy.

Unless Trump fired him, too. pic.twitter.com/sZNlwq0SGG

Trump abused vacancy laws to install cronies without Senate approval throughout his presidency, drawing complaints from nerds like me and shrugs from most of the public. Americans don’t care about procedural niceties, even when the chicanery involved is so gross that GAO has to an issue a ruling that the head of Homeland Security has been acting illegally because he was never lawfully installed in the job. I’ve got a feeling, though, that conservatives are about to rediscover that the Senate’s advice and consent is crucial to the legitimacy of top presidential appointments. That’s because progressives have been watching Trump abuse his power to appoint “acting” secretaries and are eager for President Biden to abuse it too — in their favor this time, of course.

“There’s no need to heed to McConnell’s demands to install corporatists,” said David Segal, who runs the group Demand Progress and has been leading the progressive effort to influence the Biden transition process. “He’s got to [appoint liberal Cabinet members] If he’s got any chance to attack the crises before us and stave off total democratic collapse in the midterms.”…

In other words, these groups argue, picking the types of people who usually have power in Washington ― and could perhaps get McConnell’s approval ― will be a bad idea.

Trump has relied heavily on acting secretaries to run the administration, including for high-profile positions like for the Office of Management and Budget director, the director of national intelligence as well as the head of the Department of Homeland Security, which has not had an official head since early 2019.

Installing these temporary picks through the Vacancy Act is limited. They can serve for only 210 days once the position becomes open, although it can be extended if the president nominates someone to be the permanent secretary.

We might not get Elizabeth Warren at Treasury or Bernie Sanders at Labor for the entirety of Biden’s term, but he can install them for seven months. Or, actually, maybe he *will* keep them on for his entire term as acting secretaries. Chad Wolf has been the acting head of DHS for 361 days now, after all, much longer than the statute allows. Our garbage Senate refused to force Trump to abide by the law in Wolf’s case. Now Biden and the left can claim that turnabout is fair play. That would be inconsistent with Biden’s “return to norms” message, but righties won’t be able to complain beyond noting that point. We let Trump cut the Senate out of the picture on appointments. Now Democrats may exploit the precedent.

I assume Chris Wray is next on Trump’s chopping block. For anti-Trumpers, watching Trump go nuts during the lame duck with a big purge of his enemies or a series of “I was cheated!” rallies around the country is a mixed bag. On the one hand, it’s petulant, irresponsible, and bad for the country as it tries to transition to new leadership. On the other hand, if Trump behaves even more erratically than usual on his way out, it’ll leave a sour taste in the mouths of voters who might be asked to give him a second term four years from now. As was true this year, so it’s likely to be true in 2024: Maybe only Trump can stop Trump. Him burning things down en route to the exit may help stop him in 2024.

Update: Ah, Esper committed the cardinal sin. He wasn’t willing to treat the U.S. military as an arm of Trump’s campaign. Maybe Christopher Miller is more of a fan of autocracy.

6/ … this was in marked contrast to the actions of Attorney General Barr, Director of National Intelligence John Ratcliffe, Secretary of State Mike Pompeo, and Agriculture Secretary Sonny Purdue, all of whom used their departments in various ways that helped Trump 2020.

Update: The Military Times interviewed Esper five days ago, apparently in anticipation that he’d be forced out soon. A few choice quotes:

Speaking to Military Times in an exclusive interview on Nov. 4, Esper confirmed that he never had any intention of quitting, and though he expected the other shoe to drop, he didn’t have a good read on when…

“I guess my top line is, as I look back, I see it ― you know, despite a series of crises and conflicts ― and yes, occasional tension with the White House ― I think we’ve been really successful in transforming the department, implementing my top priority as the NDS, if you will, and then protecting the institution, which is really important to me,” he said. “And then … fourth, I should say, preserving my integrity in the process.”

Dubbed “Yesper” by his critics, including the president, he takes umbrage with the idea that he has been anyone’s “yes man.”

“My frustration is I sit here and say, ‘Hm, 18 Cabinet members. Who’s pushed back more than anybody?’ Name another Cabinet secretary that’s pushed back,” he said. “Have you seen me on a stage saying, ‘Under the exceptional leadership of blah-blah-blah, we have blah-blah-blah-blah?’”

Sounds like confirmation of Tapper’s tweets that he just wasn’t obsequious enough compared to, say, Mike Pompeo. Esper also told the paper that if Alex Vindman had had his promotion blocked by Trump instead of resigning from the service first, Esper would have resigned too.

Update: Further to my point about Trump hurting himself in 2024 by how he handles the transition:

Firing the Secretary of Defense via tweet is one of many reasons why Joe Biden is getting more votes than Trump in many places while the GOP is outperforming Trump down the ballot.

Update: I missed this quote from the Military Times interview earlier: “At the end of the day, it’s as I said — you’ve got to pick your fights. I could have a fight over anything, and I could make it a big fight, and I could live with that — why? Who’s going to come in behind me? It’s going to be a real ‘yes man.’ And then God help us.” Welcome aboard, Chris Miller!