Analysis: 93% of counties with biggest COVID surges voted for Trump 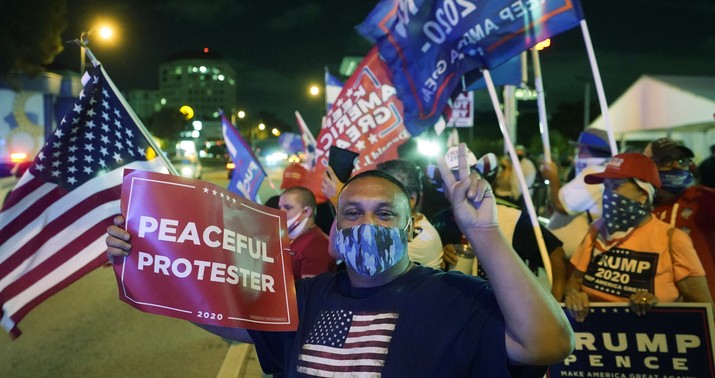 Seems counterintuitive. Handling the pandemic was Trump’s big electoral liability, right? And logically you might think that the worse an outbreak is in a given county, the angrier voters there might be at the White House for not having done a better job at containing the virus.

But think it through and it becomes easy to see why this correlation exists.

An Associated Press analysis reveals that in 376 counties with the highest number of new cases per capita, the overwhelming majority — 93% of those counties — went for Trump, a rate above other less severely hit areas.

Most were rural counties in Montana, the Dakotas, Nebraska, Kansas, Iowa and Wisconsin — the kinds of areas that often have lower rates of adherence to social distancing, mask-wearing and other public health measures, and have been a focal point for much of the latest surge in cases.

Taking note of the contrast, state health officials are pausing for a moment of introspection. Even as they worry about rising numbers of hospitalizations and deaths, they hope to reframe their messages and aim for a reset on public sentiment now that the election is over.

Of three possible explanations here, one has little to do with Trump, one is what we’ll call “defensible Trump,” and the last is what we’ll call “inexcusable Trump.” The non-Trump possibility is that the pandemic just so happened to be hitting red states harder on Election Day due to the vagaries of how it’s spread regionally since March and that’s why there appears to be a correlation between COVID outbreaks and Trump support — even though there really isn’t one. If coronavirus had arrived in the U.S. in, say, September instead, triggering the ferocious outbreak in the Democratic northeast and lighter case counts in redder rural areas that we saw last spring, the apparent Election Day “correlation” would be that counties with high case counts were *anti-Trump*. Maybe all there is to the “correlation” described in the excerpt above is standard red-state partisanship on Election Day that coincidentally maps onto where cases are high right now.

The “defensible Trump” explanation is that voters in red counties are more apt to agree with the president that reopening the economy for business should be a higher priority than containing the virus. That’s not because they’re in his thrall or whatever, it’s because they happen to share his view that Americans should be bit more willing to take risks in order to contain the economic ruin caused by the virus. And if you’re from a state that’s more likely to favor reopening, you’re probably going to have higher case counts due to higher levels of commercial activity generating more close contact among people. Voters in red counties support Trump, they’re listening to him say we should reopen everything, they tend to agree, they vote for him, and they end up with more cases because they’re practicing what he’s preaching. It’s defensible to prioritize economic activity over suppression of the virus — although as the country sets new records of cases every day, it seems less sane by the moment.

The “inexcusable Trump” explanation is that Trump’s enduring ambivalence about masks and his bravado about COVID being no big deal (especially since he left Walter Reed) really is influencing behavior in red counties to become more reckless, and recklessness leads to more infection. He’s not solely to blame — again, people have their own minds and may have arrived at skepticism about masks whether or not Trump was an advocate for that view. But having him signaling nonstop that Americans should feel free to gather en masse, as they do at his rallies, and that we’re about to “turn the corner” even though we’re headed into the most explosive community spread of the entire pandemic is surely encouraging some people to let down their guards. Result: Trump-supporting counties are seeing very high case counts right now. And they just don’t much care, or at least not enough to hold it against him.

None of these theories are mutually exclusive. All three could have been at work in counties hit hard by COVID to explain why Trump did well there. All I’d say, though, is not to assume that because counties with high case counts voted for Trump that his handling of the pandemic didn’t end up costing him the election. Here’s a number from the national exit poll (do we trust polls anymore?) that caught my eye:

Fully 60 percent said it was important and Biden overperformed his overall national vote share (which is 50.5 percent as I write this) among that group. Being seen as the better choice among people who are worried about the surge in cases may have helped him at the margins. And it may have helped especially in certain key states. In the national exit poll, when asked if coronavirus was the most important factor to their vote, 17 percent said yes and they split 82/14 for Biden. But in Wisconsin, a state with one of the worst outbreaks in the country right now, the numbers were a little higher. There, 19 percent said it was the most important factor and they split 88/11 for Biden. Sleepy Joe won the state by 20,000 votes. Did Wisconsinites’ higher anxiety about COVID seal the deal for him? “If there was any chance that I was going to vote for Trump, it was eliminated because of the pandemic,” said one Wisconsin voter to the AP.

The number of new cases today hasn’t been released yet but yesterday America topped 116,000, easily the worst day the country’s had since robust testing began. Hospitalizations are on their way up to a record too, and deaths topped 1,100 even though doctors have gotten much better at saving lives since spring. As the surge in cases expands, there’s no reason to think we won’t eventually set daily records in deaths as well. It’s only November 6; we have four or five months of this nightmare before we might expect improvement. Scott Gottlieb, Trump’s former FDA chief, isn’t trying to hide his anxiety about where this is going:

The acceleration in these trends is staggering. Rapidly rising hospitalizations, more than 10,500 in the ICU, rising cases in nursing homes and deaths, rising positivity, diffuse spread across America portends rapid growth everywhere. A national epidemic no longer regionalized. https://t.co/4R6Yg5T0Nq

The only “favorable” spin one can put on it is that some places have it worse. France recorded 58,000 cases yesterday, which would translate to around 300,000 cases per capita in the U.S. Our friends in Sweden, who have resisted lockdowns from the start, saw 6,000 confirmed cases — a clip of 198,000 here if you control for population — and are dealing with “a fairly significant increase on the number of intensive care patients.” They still haven’t ordered a lockdown but their “recommendations” on what to do to control the spread are mandatory; there’s no penalty for violating them but you’re expected to comply. A taste of what one region’s “recommending”:

Refrain from being in indoor environments such as shops, shopping centres, museums, libraries, swimming pools and gyms, with the exception of necessarily visits to grocery stores and pharmacies

Refrain from taking part in for example meetings, concerts, shows, sports training, matches and competitions. This does not apply to sports training for children and young people born 2005 or later.

If possible, avoid physical contact with other people than the ones you live with. That includes, among other things, a recommendation against organising or attending a party or similar social occasion.

“Refrain from being in indoor environments” other than your own home sounds a lot like a lockdown, however “softly” it’s being presented. What good is being allowed to have your business open if no one’s supposed to come inside?

I’ll leave you with one last data point from the AP about COVID and the election: 73 percent of voters approve of Fauci’s job performance, including 53 percent of Republicans. If Trump’s thinking of running again in 2024, gratuitously firing Fauci as revenge for having taken a “safety first” approach during the pandemic will do nothing to help him with that effort and nothing to hurt Fauci, given that Biden’s going to bring him back in three months.

Bret Baier vs. Oliver Darcy: How do you think this one ended up?