It’s the day after the election and COVID is over 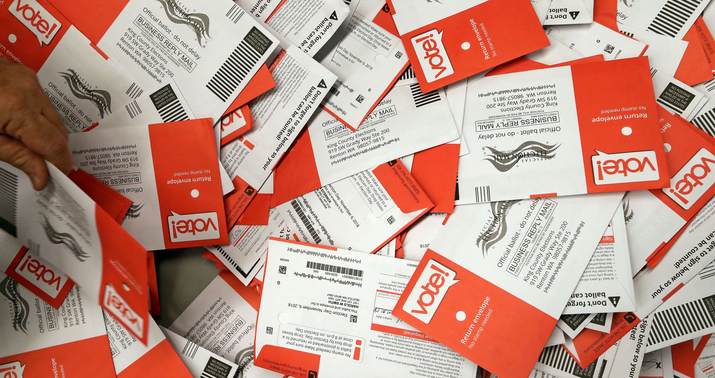 BREAKING NEWS: The United States has for the first time surpassed 100,000 new coronavirus infections in a single day, as a steadily rising number of hospitalizations threatens to again overwhelm some health systems…

The COVID Tracking Project says there were some 103,000 cases, to be more precise, and that that is indeed a new daily record. More than a thousand Americans died. Cases are up nationally by 21 percent since last week and hospitalizations are up by 13 percent, with WaPo noting that some hospitals in St. Louis and Omaha have begun postponing elective surgeries again because they need the beds.

The higher case counts aren’t a function of more testing. Testing *is* up, now typically in the range of 1.3 million daily on weekdays, but new cases are outpacing the rise in tests. The national positivity rate has gone from 4.1 percent to 6.7 percent in a month.

A momentous question that’ll never truly be answered: Did Trump’s handling of the pandemic cost him a second term? Assuming Biden holds on in the remaining battlegrounds, it’ll be by the skin of his teeth despite 225,000 deaths on the president’s watch and a relentless message from the White House since April that we all need to butch up and not worry so much about getting sick. If Trump had made any pretense of concern for those afflicted, where would he be in Michigan and Wisconsin right now?

The exit poll data last night on COVID was fascinating. Just 17 percent said the pandemic was the most important issue to them but those who did say so broke extremely heavily for Biden. Biden also led by eight points when voters were asked who’d do a better job of handling the pandemic, a spread several points larger than his popular-vote lead right now. The response when people were asked whether the effort to contain the virus is going somewhat well or somewhat badly was revealing, though: Voters split 48/50, which is very close to Trump’s and Biden’s respective vote shares. Essentially, if you voted for Trump then you’re okay with the state of the pandemic. If you voted for Biden, you’re not. How cause and effect worked there is anyone’s guess.

Here’s the result that grabbed me, though:

Fifty-one percent want to prioritize safety. Just 42 percent want to follow Trump’s lead in prioritizing reopening the economy. How many votes did Trump lose to Biden within that 51 percent?

There’s an alternative to the conventional wisdom that Trump’s COVID response lost him the election. What if it actually nearly won him the election? Shannon Palus makes the case at Slate:

Trump’s imagination of COVID-19 obviously could not ring true for the staggering number of Americans who have died from COVID-19, or for their loved ones, or for the COVID-19 long-haulers with awful ongoing symptoms. But for all the people who have been killed and who have gotten very sick, it’s still possible to not know someone personally who has been biologically compromised because of the virus. What’s more likely, based on the fact that COVID kills a small percentage of people it infects, is that you know someone who tested positive and had no symptoms, or someone who got a little sick but was pretty much OK. You are less likely to know someone who has been badly affected by COVID if the people you know are mostly white; hospitalization rates for Black people are almost five times as high as those for white people, and death rates are double. And whether you interpret that disparity as a direct result of racism—as many, many health experts do—almost certainly correlates with whether you were predisposed to vote for Trump in the first place.

Meanwhile, you’ve almost certainly seen Trump himself, an objectively not-healthy elderly man, get what he later would describe as a bad case of COVID, and return to bopping around the campaign trail within less than two weeks. By his appearances, he seems like he’ll be unaffected in the long run, even if we don’t know if he’s experiencing any ongoing fatigue or other symptoms. For Trump, jeopardizing his own health seems to have had no personal consequences. The superspreader celebration for Amy Coney Barrett did not kill or (again, appear to) seriously injure anyone in attendance. Trump has spent the whole pandemic saying things were fine, and spent the weeks leading up to the election giving his own personal demonstration of fine-ness for the cameras, by campaigning in front of crowds.

And who doesn’t want things to be fine?

It’s lazy and commonplace for commentators to believe that Trump is forever leading his fans around by the nose, but it’s not true. He’s less anti-mask than many of his hardcore supporters are, for instance. Skepticism among the grassroots right that COVID is a uniquely dire crisis has been described by some as “folk libertarianism” (although I prefer “populist nihilism”) and it didn’t originate with Trump, although he’s certainly an adherent. With all of that being so, it’s conceivable that he would have lost some support among true blue MAGA fans if he had stuck to a Faucian line on the coronavirus over the past six months. I think he would have gained more among the rest of the population; he ended up winning senior citizens last night by a mere three points and might well have done better if he’d pushed a “safety first” line on the virus. But it’s not crazy to think some populists would have resented him for, quite literally, virtue-signaling during the pandemic by pushing the sort of precautions consistently that scientists have demanded.

I mean, consider this headline:

That comes from a story published by Nature, which describes scientists wringing their hands over how badly, supposedly, they’ve failed to communicate to the public the seriousness of COVID. After all, if Trump could garner so much support after downplaying the virus for so long, surely that means America’s medical experts have failed to make their point. But I think that’s wrong. They’ve made their point just fine; it’s the fact that they’re experts that leads some righties to rebel against them by siding with Trump. Viewed that way, it’s possible that Palus is right that Trump’s attitude towards COVID helped produce the heavy turnout he got. He sided with “the people” against the eggheads warning them that another 100,000 people will be dead soon if they don’t get much stricter about their contact with others. Surely that deserves another four years in power.