Report: Biden to address country if networks call the election for him 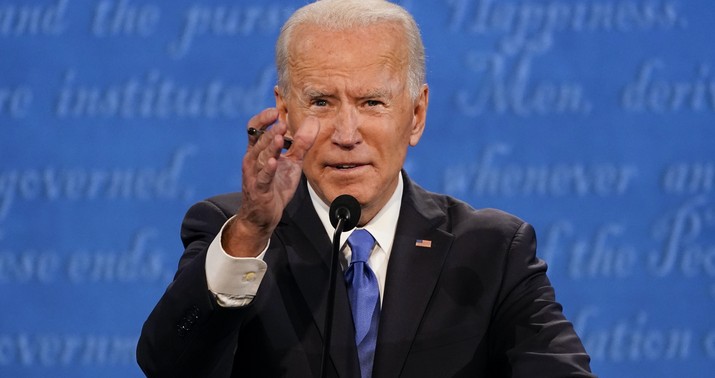 But there’s a bit of electoral-college asymmetry tonight which — in certain scenarios — really would make it obvious that Biden has won the presidency. Whereas, because Trump needs the Rust Belt to win and the key Rust Belt states (Pennsylvania and Michigan, specifically) along with Arizona will need a few days to finish counting, there’s probably no scenario in which Trump will have obviously won reelection by midnight.

By tomorrow night, though? Maybe, as the mail votes in PA and MI and AZ are tallied up.

If news organizations declare Joe Biden the mathematical president-elect, he plans to address the nation as its new leader, even if President Trump continues to fight in court, advisers tell Axios.

Why it matters: Biden advisers learned the lesson of 2000, when Al Gore hung back while George W. Bush declared victory in that contested election, putting the Democrat on the defensive while Bush acted like the winner.

So if Biden is declared the winner, he’ll begin forming his government and looking presidential — and won’t yield to doubts Trump might try to sow…

Michigan, Pennsylvania, and Arizona together account for 47 electoral votes, which would be enough for Biden to win the presidency provided that he holds all of Hillary’s 2016 states. That means, in order for Trump to justifiably declare victory tonight, he’d need to win all of the remaining battlegrounds and probably flip Minnesota as well, rendering MI, PA, and AZ irrelevant.

Although, if Trump holds all of his 2016 battlegrounds that report results tonight — including Wisconsin, where he’s a heavy underdog — that would be a strong sign that he’s *eventually* going to win either Michigan or Pennsylvania or Arizona. He’s likely headed for a second term in that case even if he falls short in Minnesota.

It’s different for Biden, who has all sorts of opportunities to flip red states before the Rust Belt gets rolling. You know what a Sleepy Joe landslide scenario would look like. If he wins Texas, for instance, that would *singlehandedly* get him to 270 along with Hillary’s 2016 states even if Trump sweeps Michigan, Pennsylvania, and Wisconsin. If Biden wins Texas plus Florida or Georgia or North Carolina or some combo thereof, the writing’s on the wall even if Trump somehow flips Minnesota. Winning Florida tonight plus another swing state would also make Biden all but unbeatable irrespective of what happens in the midwest. Those should be the only scenarios in which he walks out and pronounces himself president-elect, ones where he’s reached 270 even with votes in the Rust Belt outstanding.

Otherwise his attitude should be “count every vote.” If the outcome is uncertain late this evening, by all means make sure that the country understands that vote-counting was always supposed to take a few days in PA, MI, and AZ in order to counter Trump’s inevitable gaslighting about where things stand. But don’t declare yourself the winner prematurely just to balance Trump’s message. Be the “norms” guy. Count every vote, and let Pennsylvania, Michigan, and Arizona tell us who won by Friday.

In last night’s Scarborough thread I wrestled with the question of what TV networks should do if Trump walks out tonight and insists that it’d be unfair somehow for Pennsylvania to count mail ballots that have been waiting at election HQ for weeks to be opened. Do you take an obvious lie like that live to the public, knowing that it’s aimed at pressuring a state to disenfranchise lawful voters? Yep, the network heads told CNN. We’re going live.

Though network executives are reluctant to talk publicly about such a hypothetical and disturbing scenario, five people at various networks said on condition of anonymity that they fully expect the President’s Election Night remarks to be shown live virtually wall to wall.

However, any premature claims by the President — or by Joe Biden, for that matter, though there is no equivalent fear of that happening — will be wrapped in televised context, with vigorous corrections and visual proof that the race is too close to call.

That’s nice, but media fact-checking will do little to dissuade Trumpers eager to believe that he’s won and could only have lost due to cheating. Years of media bias against righties plus years of Trump demagoguery about the media means that he’ll easily win a test of credibility against press fact-checking among his core audience.

There *is* a scenario in which the networks might not carry Trump live, though. And because Trump is Trump, it’s not totally implausible: “One industry source, on condition of anonymity, did sketch out a possible scenario in which networks opt out of carrying Trump live: If there is widespread violence and newsroom leaders have reason to believe that Trump will pour gasoline on the proverbial fire.” Might a guy who told the Proud Boys to “stand back and stand by” at the first debate completely lose his sh*t in the event of a humiliating defeat tonight and say something irresponsible? Yeah, possibly.

But it should be noted that it ain’t the Proud Boys whom business owners in blue states are worried about as they board up their stores for election night. We can say with certainty that Joe Biden won’t use his time at the mic tonight to wink encouragement at violent partisans, which we can’t quite say of the sitting president of the United States. But we can’t say with certainty that left-wing violence won’t happen anyway if Trump really does pull an upset.

Here’s a passage that caught my eye in a Politico story this morning about Republicans privately — not publicly, only privately — expressing disgust at Trump for trying to convince Americans that the result of the election can’t be trusted if it goes against him. Our president is such a narcissistic loose cannon that people in government are having to game out crazy things he might do in a fit of rage if he’s humiliated at the polls:

When asked if there was a “West-Wing” like contingency plan for Republican leaders if Trump did something radical in the coming days, the senior Senate GOP aide was coy.

“I can’t really talk about that,” he said. “It’s not something I can really get into.”

But when pressed, he offered the following: “It’s all hypothetical, but if they do what Jason Miller was talking about you’ll see a lot of people” — he paused for a moment — “not agreeing.”

The mention of Jason Miller is a reference to the video I posted here, in which Miller casually suggested that if Pennsylvania goes ahead and counts mail ballots after Election Day — as it and other states do every farking year — then it’s evidence of “cheating.” That’s the sort of insane Orwellian claim that Democrats are trying to figure out how to counterprogram, beyond simply reminding people that it’s insane. And telling them it’s insane isn’t going to pop the partisan bubble.

I’ll leave you with this clip that’s now more than a month old to remind you of how long the White House has been laying the groundwork to falsely cry “cheating” tonight. Meadows gave this interview shortly after Trump hedged on whether there’d be a peaceful transfer of power if he lost. Sure there’ll be a peaceful transfer, Meadows said — if he loses fairly. But that’s begging the question. If the game plan is to cry “unfair!” no matter what happens, then you’re committing to not peacefully transferring power. Period.

"I think he commits to a peaceful transfer AS LONG AS it's a fair election" – White House Chief of Staff Mark Meadows https://t.co/nk0sgWZn86