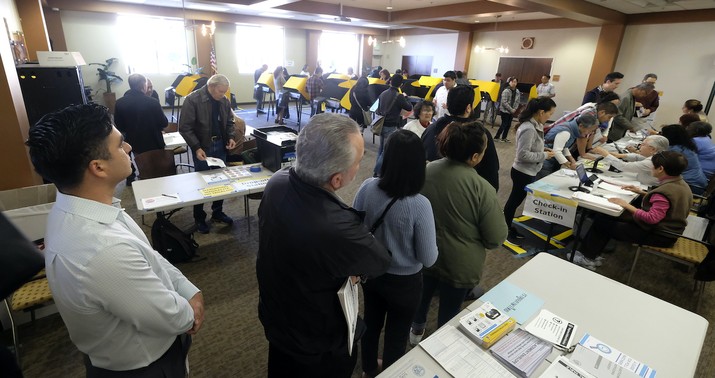 When I saw this headline I thought the story had to be a distortion of the CDC’s actual position. It is not.

What are we to do with this garbage agency at this point? They failed colossally on their most important task of the pandemic, producing an accurate test for COVID in February as the virus was spreading silently. It was April before they had rethought their position that face masks weren’t helpful in containing community spread. They’ve let themselves be strong-armed by Trump’s cronies into posting dubious guidance, but they’ve also posted questionable items on their own initiative due to simple incompetence.

And now, with people like Anthony Fauci warning in the most dire terms that the country is about to experience a ferocious outbreak, they’re encouraging people who have the virus to rise from their sick beds and go get some face time with their neighbors at the local polling place.

Win or lose tonight, Trump will spend much of the next month on a firing spree of the federal bureaucracy. I encourage him to start with the pitiful failures at the CDC.

Voters have the right to vote, regardless of whether they are sick or in quarantine.

Voters who are sick or in quarantine should take steps to protect poll workers and other voters. This includes wearing a mask, staying at least 6 feet away from others, and washing your hands or using hand sanitizer before and after voting. You should also let poll workers know that you are sick or in quarantine when you arrive at the polling location. Check with local authorities for any additional guidance.

Let me supply the “additional guidance”: If you have COVID or think you might have it, stay the hell away from other people, you selfish nob. Your vote won’t change the outcome of the election but your insistence on voting might change someone’s life irreparably. The only good reason to leave your home in an age where anything can be delivered to your door when you know you’re carrying a deadly infectious disease is if you have a medical emergency. I’m in disbelief that America’s lead agency responsible for disease control would say otherwise.

It reminds me of the woke epidemiologists over the summer who decided that protesting racism was more important than limiting community spread, except this time with the imprimatur of the United States government. Robert Redfield should be fired tomorrow — assuming that the CDC wasn’t forced to post this nutty, irresponsible advice by one of Trump’s political lackeys, to ensure that Republican voters infected with the virus didn’t let their affliction stand in the way of casting a ballot for the president.

And if that’s the case, Redfield should resign anyway for letting the White House boss his guys around on a matter as serious as keeping sick people isolated from others.

What makes this even more insane than it seems at first blush is that the other big story in COVID news today is Deborah Birx sending a memo around the White House warning aides that the country is now at the pandemic equivalent of DefCon One. This is the worst conceivable moment for the feds to take the attitude that certain public behavior is so important that infected people should knowingly expose others to the virus.

“We are entering the most concerning and most deadly phase of this pandemic … leading to increasing mortality,” said the Nov. 2 report from Deborah Birx, coordinator of the White House coronavirus task force. “This is not about lockdowns — it hasn’t been about lockdowns since March or April. It’s about an aggressive balanced approach that is not being implemented.”…

The report hits hard on the worsening situation: “Cases are rapidly rising in nearly 30 percent of all USA counties, the highest number of county hotspots we have seen with this pandemic,” it said. “Half of the United States is in the red or orange zone for cases despite flat or declining testing.”

Sounding a similar theme to past reports, it calls for “much more aggressive action from messaging, to testing, to surging personnel around the country before the crisis point.”

What is “essential at this time point,” the report said, is “consistent messaging about uniform use of masks, physical distancing and hand washing with profound limitation on indoor gatherings especially with family and friends.”

Nothing says “consistent messaging” in the midst of all that like having the CDC nudge people who’ve tested positive to go stand around in a crowded indoor space with people from their community.

Is the CDC … pro-COVID? Is that where this administration is now on the virus?

If not, how do you explain its behavior?

You know what the punchline is on all this? Redfield’s probably safe in his job despite the CDC’s abysmal performance since he can usually be counted on to perform the one task Trump demands of his deputies, which is not contradicting him even when he’s wrong. (I stress: Usually.) But Fauci and now probably Birx are on their way out because they’ve each dared to broadcast a message that Trump isn’t interested in hearing — that the situation is very serious, that the White House has to reprioritize containment urgently to manage the crisis, and that holding mass gatherings for something as trivial as a political rally is reckless beyond belief. Oh well. We get the government we deserve. We deserve this.