Trump: The Biden lockdown will take away schools, weddings, Christmas, Thanksgiving, the Fourth of July 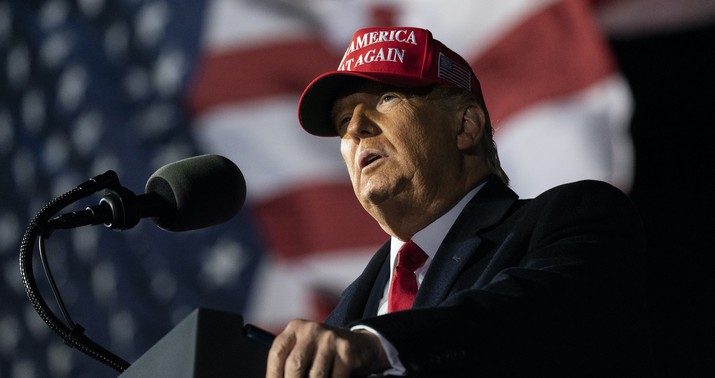 There are two ways one could try to turn the COVID lockdown debate against Biden. One way, which I think would be smart, would be to accuse him of being frankly full of sh*t about how much better America’s response to the pandemic will be on his watch. And the first step in that argument would be to stress that there just isn’t much the president can do about day-to-day progress against the disease. The feds are racing towards a vaccine, they’re doing what’s possible to fast-track drugs to treat the disease, but there’s no federal power to order a lockdown. We went through that six months ago when Trump briefly declared that the White House had authority to order states to reopen for business, only to have every legal expert in the country politely remind him that he does not. In America, governors decide whether to lock down, just like governors decide whether to impose mask mandates. Rather than let Biden strut around pretending that as president he’ll immediate order from some menu of policy options that Trump has ignored, Trump should have called him on it. Biden’s making empty promises to voters, hinting at using powers that the executive doesn’t have in order to make Trump seems more negligent by comparison.

Framing the argument that way would also sidestep the uncomfortable fact that Americans generally support lockdowns much more than Republicans do. In mid-September a Newsweek poll found that 54 percent would support a national lockdown (which, again, the president can’t order) if necessary. Just 24 percent said they wouldn’t. And daily cases were a lot lower when that poll was taken than they are now.

Instead, though, Trump’s going for full scaremongering. Which is on-brand, at least, and is certainly easier for late-deciding voters to understand than an argument about the limits of presidential power in a pandemic:

…no future for America’s youth. A vote for Biden is a vote for Lockdowns, Layoffs and Misery. Get out and VOTE tomorrow! https://t.co/gsFSghkmdM

If he wants to take an aggressive “business as usual” view of the pandemic in the campaign’s closing hours, Biden will accommodate him with a “safety first” contrast. Here he was earlier this afternoon leveraging Trump’s comments about Fauci last night:

"I got a better idea—elect me, and I'm going to hire Dr. Fauci! And we're going to fire Donald Trump!" https://t.co/KNCIGwXI7l pic.twitter.com/evdiJv5Y2z

Obama got in on the act too. An opportunity to align themselves with Fauci and against Trump in the final hours of the campaign is another remarkable gift they’ve been given by the president in a year full of them:

“One of the few people in this administration who’s been taking this seriously all along and what’d he say? His second-term plan is to fire that guy,” Obama said.

“They’ve already said they’re not going to contain the pandemic. Now they want to fire the one person who can actually help them contain the pandemic,” he continued. “So Georgia, if you think they’ve done a bad job at managing COVID so far, basically what they’re telling you now is you ain’t seen nothing yet.”

The punchline is to the “Biden lockdown” tweet is that even Fauci isn’t calling for a national lockdown. That might change depending upon just how bad things get, but lately the furthest he’s been willing to go has been to call for a national mask mandate — which would probably only matter at the margins, as most Americans have already been wearing masks regularly since spring, or so they claim. (There is evidence to suggest that states with mask mandates have lower rates of hospitalization, though.) Fauci was asked about the possibility of a new lockdown in an interview with “60 Minutes” a few weeks ago and said, “First of all, the country is fatigued with restrictions. So we wanna use public health measures not to get in the way of opening the economy, but to being a safe gateway to opening the economy. So instead of having an opposition, open up the economy, get jobs back, or shut down. No. Put ‘shut down’ away and say, ‘We’re gonna use public health measures to help us safely get to where we want to go.’”

Has he changed his mind now that cases have supernova-ed in Europe, leading to new lockdowns there? We’ll find out if and when President Biden rehires him in January, but again, all Fauci would be able to do from his perch at NIAID from a legal standpoint is publicly advocate for governors to lock down. And if righties already oppose lockdowns now, imagine the intensity of the opposition if and when a Democratic president comes out in favor. Hardly any red-state governors will comply if Biden and Fauci are at the center of the debate. Which is why the smart thing for both of them to do would be to remain publicly agnostic on the issue.

In lieu of an exit question, here’s the president on the trail today talking about Biden supporters Lady Gaga and Jon Bon Jovi, because why not.

“I can tell you stories about Lady Gaga. I know a lot of stories, Trump says cryptically, then immediately adds: “Jon Bon Jovi, every time I see him, he kisses my ass.” pic.twitter.com/l37CDoiSZ4