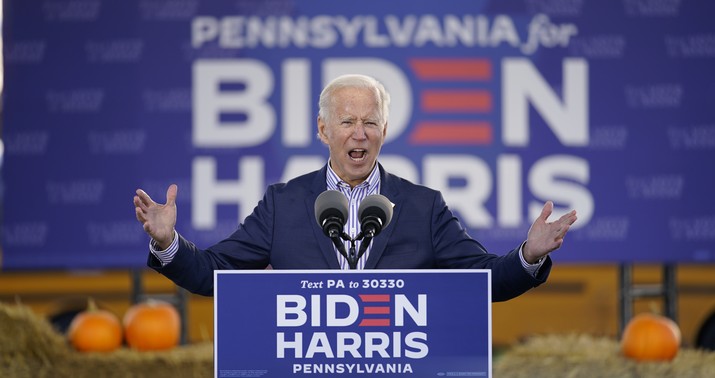 Adjusting for Rasmussen’s famous pro-Trump lean, this feels like Biden +27.

No, actually, this isn’t a disaster for Trump. He’s actually gained a point since Ras’s last poll of PA. And if you include leaners, he’s only down by three, 50/47.

But trailing on the eve of the election in a must-win state according to a pollster that’s typically very favorable to him is not where he wants to be.

A new Rasmussen Reports telephone and online survey of Likely Voters in Pennsylvania finds Biden leading Trump 49% to 45%. Two weeks ago, Biden had a 50% to 45% lead…

Forty-three percent (43%) of voters in the Keystone State have already voted this election cycle. Among these voters, Biden leads by 73% to 23%. Trump has a two-to-one advantage – 62% to 31% – among those who have yet to vote.

Ninety-two percent (92%) of all voters in Pennsylvania have made up their minds whom they’re going to vote for. Biden has a 52% to 47% advantage in this group.

Nate Silver has spent the past few days on social media intermittently reminding people that Pennsylvania is so important to the race this year that Biden would flip instantly to an underdog to win the presidency if Trump pulls the upset there. Yes, true, Sleepy Joe can still pick up the electoral votes he needs to get to 270 without PA in his column; Michigan + Wisconsin + any one of North Carolina or Georgia or Arizona (and a single electoral vote from Omaha’s Second District) would do it for him. But Pennsylvania has enough demographic similarities to those other states that if he’s coming up short there he’s probably coming up short elsewhere. Pennsylvania’s the big one.

Here’s what the RCP average of PA looks like right now.

You’ll notice that Trump is within three points, giving him a very realistic chance of an upset. Four years ago he finished 2.1 points behind Clinton in the Pennsylvania polling average and then won the state by seven-tenths of a point. If we get that same shift tomorrow from the current polling average, Biden would lead by … 0.1 percent. God help us all.

But there’s something else to notice about the array of polls that form the RCP average. This isn’t a case, as sometimes happens with averages, where there’s clear consensus around the state of the race. If we had 10 polls all saying that Biden leads by five, that would be one thing. What we actually have is two different clusters of polls that say dramatically different things, and when we average them together we get a result in the middle. The three surveys showing Trump ahead — Trafalgar, InsiderAdvantage, and Susquehanna — are all allied with Republicans. Clearly the turnout models they’re using see much more robust turnout for Trump than other pollsters do. The surveys that aren’t allied with Republicans — Emerson, Reuters, the NYT, NBC, Monmouth — are all congregated around a Biden lead of five or six points. What makes Rasmussen’s result so interesting is that they frequently have strong results for the president, as Republican-allied pollsters tend to do, but they’re actually a little closer to the non-allied consensus today. And they match the overall average almost bang-on.

Are we headed towards something on the order of a three-point Biden win or will one of the two clusters have a clear victory over the other?

There’s another interesting quirk in the Pennsylvania polling today. There are two surveys out that didn’t get incorporated into RCP’s average, for whatever reason, and both of them have unusually big samples of around 2,700 people. (By comparison, the biggest sample among the polls at RCP is 1,800 and most have far less than that.) And both of them show unusually large leads for Joe Biden. CES, which I wrote about the other day, has it 52/44:

The difference for Biden is independents, among whom he leads by double digits. Meanwhile, Morning Consult has Biden up nine in PA:

Note the gigantic sample of Florida, which also produces a bigger-than-expected lead for Biden. Now that I look back at it, the Times’s 1,800-voter sample of PA also has a Biden lead on the higher side of the recent polling. You’re left to wonder whether the polls with smaller samples and higher margins of error that show a tighter race are lowballing Sleepy Joe and whether Pennsylvania won’t be as tight as everyone expects.

I’ll leave you with one more point about PA. Although mail-in ballots generally should trend very blue across all states, Silver’s been beating the drum lately about how ballots mailed in the final days of the race should have a more even partisan split. Which means that even if Trump and the GOP manage to get votes that arrive after Election Day thrown out, those votes might not have a lopsided Biden tilt. They might be more of a push, with a negligible effect on the outcome. Silver spotted this data today from Pennsylvania:

Pennsylvania isn't a huge mail-voting state, but Dems having returned 82% of mail ballots vs. 71% for Republicans is something that stands out a bit. Returned mail ballots are +43 Democrat but outstanding ones are just +9 D.https://t.co/sTPHw4KZsl pic.twitter.com/nPpj6Uw9qE

A larger share of Dems have got their ballots in than Republicans. Which might not matter at all: Some GOPers may have been planning to vote by mail, requested a ballot, and decided in the end to just do it in person tomorrow instead. But every vote that’s already banked is a vote that won’t be lost tomorrow if something comes up to keep that voter away from the polls — bad weather, ambivalence about their party’s candidate, COVID fears, or what have you. And if the Republicans who received mail ballots in PA *do* decide to drop them in the mail today, it’s anyone’s guess whether the president’s lawyers will end up managing to get those votes thrown out in the end.