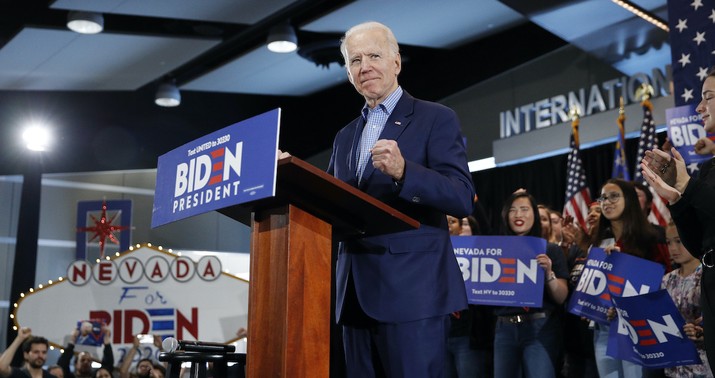 But there’s an exception for Nevada political journalist Jon Ralston, who’s been doing this a long time. And in this case he’s not really “interpreting” early turnout, he’s simply comparing this year’s Democratic advantage to 2016’s Democratic advantage. Given Biden’s formidable polling lead and the avalanche of donations lefties have sent to their candidates over the past month, one would expect a crushing lead in early voting for Team Blue as Democrats race to the polls to cast their ballots against Trump. Then we get some suspense over whether Republicans can erase that big lead on November 3.

But that’s not what the Nevada numbers show, says Ralston. Democrats are leading, as they traditionally do, but the “firewall” they’re building against Republican turnout on Election Day isn’t as impressive this year as you might expect — so far.

But let’s be clear: The Dems are not making huge gains every day to get that number up to 88,000, which would be the equivalent of the 2016 number extrapolated with 200,000 more voters on the rolls. I’m not sure what number would make them comfortable, with this cycle’s odd patterns (so much mail, uncertain Election Day turnout).

But my guess is they want to get to 80,000-plus. They have three days — plus whatever mail comes in after Saturday, which is a wild card, too…

Ralston thinks they’re going to miss their early-vote advantage target by a few thousand votes. And that’s a very big deal potentially, bearing in mind that (a) Trump fell just two points short in Nevada in 2016, (b) he’s overperforming this year in polling with Latinos, a key voting bloc in Nevada, and (c) his most realistic chance at reaching 270 may require flipping Nevada. If he loses Michigan, Wisconsin, and Arizona, which seems more likely than not right now, he’d be staring at a 269-269 tie. Solution: Nevada. Check out Brandon Finnigan’s first map here:

Time for Republicans to get excited about Nevada, right? Well, hold on. The X factor this year, in NV and everywhere else, is independents. Trump won that group in Nevada by a 50/37 spread over Clinton four years ago, according to the exit polls. This year, however, polling shows indies more evenly split, which means Biden should have more margin for error in his early voting returns than Hillary did. Nate Silver cautioned about that this morning:

For example, Biden lost independents by 13 points in Nevada in 2016, per the exit poll there. This year, he leads them by 3 points, in an average of the last 6 polls of the state. That amounts to a net 6 point swing to Biden.

So if you had the same partisan turnout split as in 2016 in Nevada but with this year's partisan breakdown of the vote, Biden would win by ~8 points not ~2 like Clinton. Probably though the split will be a bit worse for Democrats which is why polls have him up ~6 instead.

Totally possible (maybe likely?) that Biden’s early-voting advantage looks discouraging on the morning of November 3 and then he turns around and wins the state by a bigger margin than Clinton did four years ago thanks to indies. In fact, Dave Wasserman of the Cook Political Report cranked out this table yesterday showing how the polls tend to underestimate different parties depending on the state — or even the region. Republicans were lowballed in Florida and several midwestern battlegrounds not just in 2016 but in 2018 too. That’s reason for Trump to feel confident about Ohio and Iowa. But *Democrats* were lowballed over both cycles in the southwest, including Nevada:

By the way, it’s funny to me to see which data gurus are getting more bullish on Biden as we get closer to the election and which are getting more bearish. Wasserman has been *extremely* bullish, not quite at the point of saying Biden’s a sure thing but very close. He studies district-level polls for House races, and those polls seem to be pointing towards a surprisingly strong Democratic victory. Silver, on the other hand, has begun to hedge a bit. His model still gives Biden a very good chance of winning — 88 percent as of this morning — but tweets like this suggest he’s not quite that confident himself:

A lot of Trump's hope stems from this.

And although he has some *good* backup plans if he loses PA… namely AZ/FL/NC/GA…he doesn't have a *great* one being ahead only 1-3 points in those states.

FiveThirtyEight has Biden up 5.1 points today in Pennsylvania in their weighted polling average. All it would take to put the race very much in doubt would be a small bit of movement towards Trump across the board in swing states, starting with PA — say, two points — combined with a standard polling error in his favor. That won’t get him Michigan or Wisconsin, but he can afford to lose those two as long as he wins the remaining battlegrounds. Just a small bit of momentum in the polls would make it feasible.

Biden can still get to 270 without Florida and Pennsylvania. Georgia would do it for him (along with Michigan and Wisconsin), or Arizona plus an electoral vote somewhere else. But what Silver’s telling us here is that that gaudy 88 percent probability could change by a lot, very quickly, with just a small bit of late-breaking MAGA action in the swing states. That seems hard to comprehend on a day when Texas is moving from “lean Republican” to pure toss-up, but that’s where we are.

Exit question: Sixty-five percent of Republicans think Trump’s going to win the popular vote? I guess they call it “blind partisanship” for a reason.