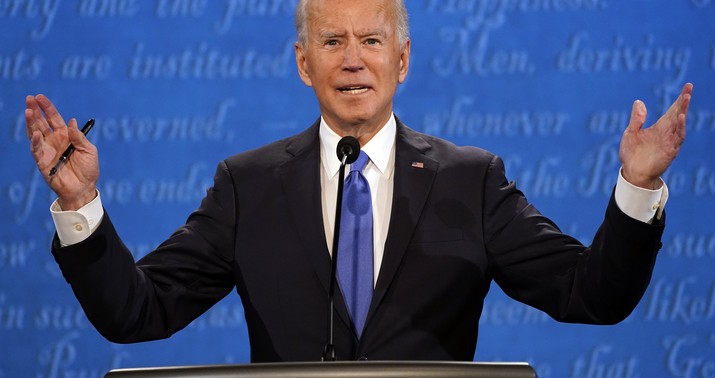 It’s arrogant to second-guess Team Joe strategically when they’ve run a stellar campaign that’s delivered their guy to the cusp of the presidency, but the logic of visiting Georgia at this point isn’t immediately obvious. Why not Florida? Why not Pennsylvania? Why not Michigan or Wisconsin or Ohio or Arizona instead?

Democratic nominee Joe Biden is headed to Georgia on Tuesday, part of a late effort by the campaign to flip a state that Republicans have carried in every White House contest since 1996.

The former vice president will deliver remarks Tuesday afternoon in Warm Springs on “bringing Americans together to address the crises facing our nation,” his campaign said, before an evening drive-in rally in Atlanta to encourage Georgians to cast their ballots during the last week of early voting…

The trip is scheduled days after vice presidential nominee Kamala Harris campaigned across Atlanta. Her Friday visit included events with student leaders in Atlanta and a drive-in rally at Morehouse College, where the California senator pushed back on Trump’s appeals to Black men.

With how by-the-book this campaign has been, this is malpractice *unless* they think they’ve got 270 locked up. https://t.co/lzwYFD3QWg

It can’t possibly be that they think they have 270 locked up. They may think they’ve got Michigan and Wisconsin — and even Arizona — in the bag, but that’s still only 269 electoral votes if you include all of Hillary’s 2016 states. They can likely get to 270 by picking off either Nebraska’s Second District or Maine’s Second, but a 270-268 election is the stuff of nightmares. Not only would it lead to intense legal battles in states where the margin is close, it would create a chaotic scenario in which one or two members of the electoral college could flip the presidency by defecting to Trump despite the outcome in their states.

In fairness, Biden does seem to stand a fair chance of winning Georgia. A new poll today from the Atlanta Journal-Constitution has him ahead 47/46 there. Other polls published over the past week have put him up by four points, six points, and seven(!) points, while several more show the race tied. FiveThirtyEight’s forecast now has Trump a mere 53 percent favorite to win GA, down from 70/30 on August 31st. Clearly there’s good reason to spend a little time in Georgia and try to get Democrats there excited to turn out, believing that victory is finally possible.

It’s just that … the reasons for spending time in Florida and Pennsylvania are better than good. Biden currently has a 66 percent chance of winning FL, per FiveThirtyEight, and an 86 percent chance of winning PA. But Trump was famously underestimated in both states in 2016 polling, and Pennsylvania could be especially fraught this year given the legal tangles over mail-in ballots. Meanwhile, in Florida:

After weeks of Democrats outvoting them by mail, [Florida] Republican voters stormed early voting precincts in person this week, taking large bites out of their opponents’ historic lead in pre-Election Day ballots.

The Democratic advantage was still huge as of Saturday morning: 387,000 ballots. But that’s a 21 percent reduction from Democrats’ high water mark, set three days prior. The election is in 10 days…

According to TargetSmart’s analysis, Black voters ages 18 to 29 have cast 15.8 percent of the total ballots so far in Florida out of all voters in that age range. That’s half a percentage point down from the same period in 2016…

Democrats are turning out more low-propensity voters and newly registered voters than Republicans. But as shares of their party’s votes, the proportions are roughly the same as 2016, according to an analysis by Tyson, whose most recent 1,000-sample Florida poll has Trump with a 2-point lead that’s well within the survey’s 3.1-point margin of error. Many recent public polls have Biden marginally leading.

Time is a finite resource. Every minute Biden spends in Georgia is a minute not spent in Pennsylvania and Florida. And if Trump wins Florida, his odds at a second term rise considerably. It’s not quite the case that everything would come down to Pennsylvania if Trump takes FL, but it’s substantially the case.

And yet — that may explain why Biden’s going to Georgia tomorrow. It’s one of the few states on the map that’s large enough (16 electoral votes) *and* close enough to plausibly hand Biden the presidency even if Trump takes Florida and Pennsylvania. Ohio could do it too, but Trump won Ohio by a bigger margin in 2016 (eight points) than he won Georgia (five points). And one wonders how likely Ohio would be to turn blue if Trump finds a way to hold onto Pennsylvania after all. Georgia is potentially Biden’s ace in the hole, a state that could get him over the finish line — narrowly — in tandem with Michigan and Wisconsin even if he loses all the other battlegrounds. Hitting that trifecta would give the Democrat 274 electoral votes. Biden wouldn’t even need Arizona in that scenario.

It’s hard to imagine Georgia going blue if next-door Florida stays red, but it may be that shifting demographic coalitions since 2018 have made GA at least as competitive for Biden as Florida is. Stacey Abrams fell just a point and a half short in the gubernatorial race there two years ago thanks to strong support from black voters, who made up 30 percent of the electorate according to exit polls. (Just 14 percent of the Florida electorate was black that year.) Biden will try to build on that with stronger-than-usual support for a Democrat in the south among white college grads and suburbanites. It’s possible that support from Cuban-Americans drags Trump over the finish line in Florida, only for the GOP to turn around and find that the “Biden coalition” has won a dogfight across the border in Georgia that’s made Pennsylvania largely irrelevant to the final outcome.

Simply put, there’s a lot of bang for the Democratic buck potentially in GA. There’s more in Texas, where multiple polls lately also show Biden ahead(!!!), but Trump won Texas by nine in 2016 and the conventional wisdom is that Republicans will come through for him there. That sort of longshot is worth a visit from Kamala Harris but not from the nominee himself. Georgia is a more plausible pick-up so Georgia gets Biden in the flesh. Which should make local Democrats happy: There are not one but two Senate races on the ballot in the state this year and having the nominee goose turnout in person could be decisive in at least one of them, the David Perdue versus Jon Ossoff race that’s also been tight lately.

I’ll leave you with this new ad from Team Trump, their own take on the “Weekend at Biden’s” ad from a Super PAC that made a splash last week.