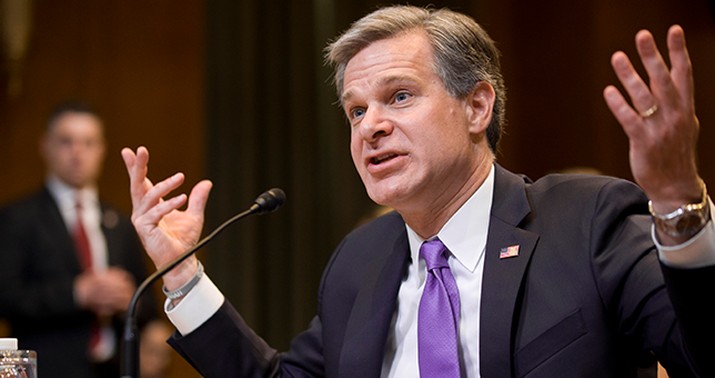 This WaPo story cites sources claiming that the subject’s already been broached among Trump and his advisors, with Wray potentially on the chopping block after the election.

I’ll go them one better. Given Trump’s growing desperation for a gamechanging October surprise against Biden, I think there’s a small but nonzero chance that he’ll fire Wray *before* the election. It’s perfectly within his character to look at the polls next Monday, see that he’s eight points behind, and to dial up Wray in a panic with an ultimatum. Are you going to announce that you’re opening an investigation into Joe Biden or not? If Wray says no, he’s done right then and there. And then Trump will set about trying to maneuver some crony into the vacancy who *will* announce an investigation into the Bidens for him.

I wouldn’t say it’s likely to happen. It would be so brazenly corrupt that any normal person would think less of Trump after it happened, which would defeat the purpose of the gambit. Maybe Trump will grasp that, although I wouldn’t bet my life on it. There’ll be a lot of lashing out in unexpected ways over the next 12 days if the race doesn’t begin to tighten immediately. And there’ll be a lot more lashing out after November 3 if voters prove the polls correct that day.

If Trump loses, the lame-duck session this year will be an amazing alternate-reality look at how crazy a second term for him would have been day to day, once he no longer had to worry anymore about what voters thought of him. Buckle up.

President Trump and his advisers have repeatedly discussed whether to fire FBI Director Christopher A. Wray after Election Day — a scenario that also could imperil the tenure of Attorney General William P. Barr as the president grows increasingly frustrated that federal law enforcement has not delivered his campaign the kind of last-minute boost that the FBI provided in 2016, according to people familiar with the matter.

The conversations among the president and senior aides stem in part from their disappointment that Wray in particular but Barr as well have not done what Trump had hoped — indicate that Democratic presidential candidate Joe Biden, his son Hunter Biden or other Biden associates are under investigation, these people say. Like others, they spoke on the condition of anonymity to disclose internal discussions…

People familiar with the discussions say Trump wants official action similar to the announcement made 11 days before the last presidential election by then-FBI Director James B. Comey, who informed Congress he had reopened an investigation into Clinton’s use of a private email server while she was secretary of state after potential new evidence had been discovered.

Trump was so focused on the Durham report that he would turn up the television volume when segments would air about it, people around him said. Trump has told allies that he once believed Barr would deliver “scalps” in the form of Durham’s findings, according to an adviser who recently spoke to Trump about it. “But they aren’t doing s—,” the president said, according to this person.

“This is major corruption,” Trump told Fox News two days ago about the Hunter Biden emails, “and this has to be known about before the election.” I’m struggling to find the right words to express how insanely unethical it is for the president to publicly lean on his Attorney General and FBI chief in the final days of a campaign to open an investigation into his opponent, and to admit that he wants it done before the election. Remember Rod Rosenstein’s memo to Trump in May 2017, which Trump later (disingenuously) used as a pretext to fire James Comey? (His true motive was Comey’s interest in the Russiagate probe, of course.) Rosenstein’s criticism of Comey in that memo was that he’d behaved abysmally in how he handled the Hillary Clinton email investigation, first holding a press conference to explain the evidence against her despite his refusal to charge her and later publishing his letter to Congress in late October announcing that the probe had been reopened. The DOJ isn’t supposed to announce who or what it’s investigating until charges are filed, and if charges aren’t filed then it’s not supposed to say anything about an investigation it’s conducted.

Trump’s throwing all of that out the window. He wants a probe of the Bidens, he wants the world to know it’s happening, and he wants it before the election. His political motives couldn’t be more naked. In fact, I think he cares less whether an investigation of the Bidens is actually conducted than simply whether its existence is announced; after all, one way or another, what Hunter and Joe Biden were up to with China and Ukraine won’t matter to him after Election Day. Aaron Blake had the same thought I did: This is exactly but exactly how Trump approached his quid pro quo with Ukraine’s president in the summer of 2019. The thing he wanted above all else from that deal was an announcement that Ukraine was investigating Burisma and Hunter Biden. The findings of the investigation were less important than letting people know that it was under way, to cast formal suspicion on Biden in the eyes of voters in hopes of influencing their choice for president.

FULL CIRCLE: Trump today issued the same set of demands to Attorney General Bill Barr that he issued last year to Ukrainian President Volodymyr Zelensky: (1) Launch an investigation into Joe Biden and (2) make a public announcement. (There is no evidence of wrongdoing by Biden.) pic.twitter.com/YaL1omQNio

He leaned on Zelensky for an announcement a year ago, he’s leaning on his own deputies now. And not just Barr and Wray. He got Mike Pompeo to release some of Hillary Clinton’s emails at the State Department recently, in case anyone still cares about that. He has his team at HHS scrambling to put together a multibillion-dollar program to get gift cards to seniors for prescription drugs before Election Day even though lawyers in the department fear it might be illegal. He’s desperate, so he’s kitchen-sinking it. And he’s going to be even more desperate next week.

He’s so desperate, in fact, that he’s now overreached to the point that Barr and Wray can’t do much to help him even if they want to. They could announce the launch of a Biden probe, but because Trump has telegraphed his electoral interest so heavy-handedly, public reaction would end up focused more on the president’s (and the DOJ’s) corruption than Biden’s. He’d gain less from it than he’d lose. I wonder if Barr’s tried explaining that to him, or if Trump’s too far gone by now to listen to reason about it.

He gets a precious chance tonight at the debate to convince the public himself that Joe Biden, not Trump, is the sleazier option for Americans this year. He’d better be persuasive:

No indication at all of a decline in Joe Biden's favorability ratings, which is what Trump presumably would be hoping for if the Hunter Biden stuff was working. pic.twitter.com/CSYlKWosPO

Trump’s favorability is 42.7/54.2 by comparison. A Gallup poll taken last month found 66 percent said Biden was likable versus 36 percent who said so of Trump, which is about 10 points less than his polling in the presidential race. Even many people voting for him find him off-putting, in other words. A reservoir of trust and credibility would be tremendously useful to him right now in trying to sell voters on the idea that Sleepy Joe has a major scandal to his name and somehow it only came to light in the last three weeks of a campaign after Trump fell behind badly in polling. He doesn’t have that reservoir.

We’re all going to be making lots of predictions over the next 12 days but here’s a category that shouldn’t go overlooked: How many of his deputies will Trump fire in the immediate aftermath of the election? I’d say Wray is gone by the end of election week, if not on November 4. Barr might be done too. I think he’ll look for ways to fire Fauci, although it’s not clear how easily he could oust a career civil servant. He might need Alex Azar to fire Fauci instead of firing him directly, which would force Azar to decide whether to carry out that order. (Fauci would have a chance to appeal, which might keep him on the job until Biden takes office.) There might be revenge taken on FDA chief Stephen Hahn as well, since Hahn recently denied Trump a vaccine-related October surprise by passing new rules slowing down the approval process. And here’s the thing — all of these firings may happen irrespective of the outcome on Election Day. No matter who wins or loses, Trump will no longer be accountable to voters the day after and will no longer have to worry about a popular backlash to too much personnel chaos within the administration. Get your predictions in now.