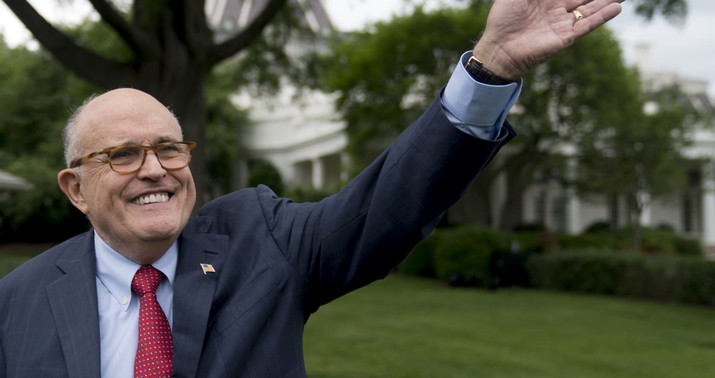 If it was this easy for Sacha Baron Cohen to get kompromat on Rudy, imagine how easy it must have been for foreign intelligence.

Here’s the thing about 2020’s absurdities: They seem unthinkable right up to the moment that they happen, and then they seem inevitable. Trump getting COVID is a perfect example. Every day from early March to September 30: “He won’t get infected. He’s the most well-protected person in the world. Everyone around him is being tested before meeting with him. He’ll be fine.” Every day from September 30 to today: “Of course he got infected. He and his retinue of morons hardly ever wore masks or kept their distance from each other. The question is how it took seven months for them to have a mass outbreak at the White House.”

Same goes for Rudy’s noteworthy cameo in the new Borat movie being released on Friday. Before: “No, Rudy Giuliani isn’t going to get caught on camera lying on a bed with his hand down his pants as part of a Sacha Baron Cohen prank.”

After: “I’m surprised they didn’t catch him actually whipping it out.”

This is the president’s lawyer, who’s been spearheading the effort to find dirt on the Bidens for the past 18 months. This is whom Trump wants at quarterback in taking down his opponent:

In the film, released on Friday, the former New York mayor and current personal attorney to Donald Trump is seen reaching into his trousers and apparently touching his genitals while reclining on a bed in the presence of the actor playing Borat’s daughter, who is posing as a TV journalist.

Following an obsequious interview for a fake conservative news programme, the pair retreat at her suggestion for a drink to the bedroom of a hotel suite, which is rigged with concealed cameras.

After she removes his microphone, Giuliani, 76, can be seen lying back on the bed, fiddling with his untucked shirt and reaching into his trousers. They are then interrupted by Borat who runs in and says: “She’s 15. She’s too old for you.”…

Even before he reaches into his trousers, Giuliani does not appear to acquit himself especially impressively during the encounter. Flattered and flirtatious, he drinks scotch, coughs, fails to socially distance and claims Trump’s speedy actions in the spring saved a million Americans from dying of Covid. He also agrees – in theory at least – to eat a bat with his interviewer.

The scene was filmed this past July, which we know because Rudy took to boasting at the time that he had outwitted Cohen. “I thought about all the people he previously fooled and I felt good about myself because he didn’t get me,” he told the New York Post back then.

Remember Mr. Gower from “It’s a Wonderful Life”? He was Bedford Falls’s respected pharmacist, saved from a catastrophic mistake when a young George Bailey recognized that he had filled the wrong prescription for a sick customer. In the alternate timeline where George is never born, he’s a ruined drunken derelict who lets himself be humiliated at Nick’s bar for the entertainment of patrons. Rudy is the Mr. Gower of the Trump show — a former mayor of New York, hero of 9/11, and a once semi-serious presidential candidate who now spends his time stumbling around rhetorically for the political press’s morbid amusement. Him getting caught in a Borat sting is the equivalent of Nick spraying Mr. Gower in the face with seltzer. It’s supposed to be funny but it’s actually terribly sad as an example of how far a formerly reputable person has fallen.

Especially since Rudy didn’t need an alternate timeline to turn him into Trump’s least respectable crony, the guy whom other MAGA mooks look down on as undignified.

A little more from the scene, per the Daily Beast:

On what appear to be hidden cameras, we see Giuliani remove her microphone and ask for her phone number and address as he sits down on the bed. He starts patting her backside as she removes the microphone from his pants. Giuliani then lies down on the bed and starts sticking his hands down his pants in a suggestive manner.

But before anything more can happen, Borat bursts into the room and shouts, “Put down your chram!”—his preferred word for penis. “She’s 15! She’s too old for you!”

The startled Giuliani, who had no reason to believe his interviewer was underage, sits up abruptly and gets out of there as fast as he can. “Rudy, Trump will be disappoint! You are leaving hotel without golden shower!” Borat yells after him.

I’m going to try some anti-anti-Rudy spin here, mainly because I’m bored and this fiasco warrants a contrarian hot take amid the entirety of America’s political class guffawing at him this afternoon. Giuliani is single (or unmarried, at least). The actress is 24 and presumably appeared to him to be an adult; she does look young in some pictures online, but he would have reasonably believed her to be an adult given that she presented herself as a journalist. She flirts with him in the scene, according to the Daily Beast, flattering him and touching his knee before inviting him to “have a drink in the bedroom.” The idea of a 76-year-old hooking up with a 24-year-old is … unappealing (although check back with me on that when I’m 76) but there’s nothing illegal about it. Maybe Rudy thought he was about to get an unexpected roll in the hay from a young admirer drawn to his fame and power. In which case, what’s supposed to be embarrassing about the scene? That he still has a libido?

Oh, wait. It’s probably the whole “lawyer to the president who’s mixed up with shady eastern Europeans brazenly allows himself to be compromised in a honey-trap sting,” isn’t it? Yeah, I think that’s it.

Looking forward to watching on Friday either way. Perfect timing too, as this is happening at the very moment Giuliani is trying to convince the American public that they should take seriously his allegations about Hunter Biden’s poor character. Exit question: How did Cohen get him to agree to let them use this footage? Rudy wasn’t in public. Did he sign a waiver before the “interview” and then all of the stuff with him on the bed caught by the cameras was considered part of that?

I’ve seen the Giuliani moment in Borat 2. It’s even wilder than it sounds. Beyond cringe.

Update: On second thought, I’m going to delete the update that was here about Rudy supposedly being pranked again by an Ivanka impersonator. We don’t have any proof that those texts are real. It’s the sort of thing he would do — this is a guy who’s butt-dialed reporters, remember, allowing them to eavesdrop on this private conversations — but that doesn’t mean he actually did do it.

CDC Admits Their Numbers on COVID Are off by a Huge Amount.