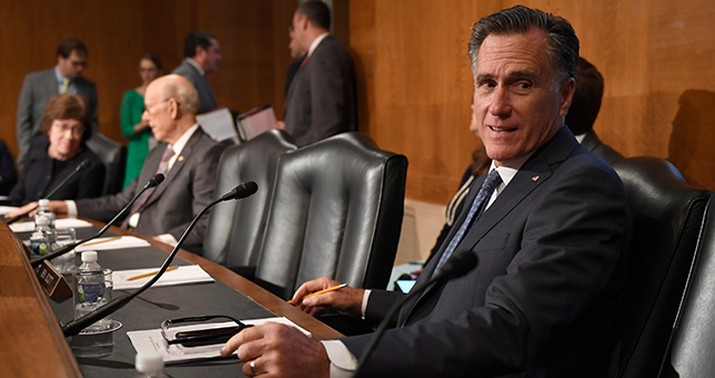 If this is borne out on Election Day, with a decisive crossover vote for Biden, what’ll we call it? It’d have to be “Romney’s revenge,” right?

Scott Rasmussen conducted a clever experiment here. After all, you can’t just look at how Biden is polling among Republican voters to get a sense of how many Never Trumpers are out there. That’s because various people in that group no longer identify as Republican; they’re right-wing independents, having left the GOP precisely because of Trump’s influence over it. There may be only five percent of self-defined Republicans supporting Biden but, say, another 15 percent of Republican-leaning indies who intend to vote for him.

To get a better idea of how big the Never Trump contingent is, Rasmussen asked all voters first to say what type of candidate they’d prefer to vote for and then which candidate they’re actually voting for this fall. Results:

The survey offered voters a choice between 4 presidential candidates with equal skills and temperaments. Thirty-six percent (36%) say they would favor a Republican who supported policies similar to President Trump while 12% would support a more traditional Republican.

On the other side of the aisle, 24% prefer a Democrat who supported policies similar to Senator Bernie Sanders and an identical 24% prefer a more traditional Democrat.

However, there is a great divide among those who prefer a more traditional Republican candidate. Fully one-third of them (34%) are voting for Biden.

Rasmussen estimates that Never Trumpers make up four percent of the total electorate. That’s four percent that might otherwise go to a traditional Republican candidate that’s headed for Biden instead — which works out to an eight-point shift overall, commensurate with Biden’s national lead right now.

“Disloyal!” you say. But we can play the same game with different candidates and other parts of America’s right wing. For instance, how many Republican voters who prefer policies like Trump’s would boycott an election or vote for a Democrat if the GOP nominated a more traditional candidate like Mitt Romney? We don’t need to guess about that, actually. It happened in 2012 and smart analysts like Sean Trende and Nate Cohn were all over it. Staying home on Election Day or crossing over for the other party’s candidate is by no means unique to Never Trumpers. When part of a coalition feels that its needs aren’t being met by the party’s leadership, be they economic, international, or civic, then it looks elsewhere. That’s what a lot of working-class whites who prefer a more nationalist Republican did when forced to choose between Obama and Romney. That’s what a lot of college-grad whites who prefer a more traditional Republican will do when forced to choose between Biden and Trump.

And that’s the real core of the Never Trump contingent, you know. Mention “Never Trump” and you’re apt to think of the Project Lincoln guys or the staff of the Bulwark or David French or some other figure that’s constantly flaying Trump for indecency online. But those of us in that cohort are a tiny, negligible group. The Never Trump people who might make the difference for Biden are the soccer moms, the professionals who live in the suburbs whom we’ve heard so much about this year. They’re not hardcore ideologues and they’re certainly not ranting about Trump online every day. They’re people who don’t like his nonchalance about COVID, worry about the civic impulses he encourages, disdain the full-spectrum crankery he’s prone to engage in, and are willing to vote this time for reasons other than what’s best for their marginal tax rate. You can ignore George Conway or Rick Wilson, but you’ve got to get some of those people back.

Rasmussen notes that, across all parties, 58 percent preferred a Trump- or Bernie-style populist versus just 36 percent who preferred a more traditional Republican or Democrat, which is ironic since the country seems to be on the cusp of electing a very traditional Democrat. Note in the excerpt above, though, how Democrats are evenly split between traditionalism and populism whereas the GOP — for now — has tilted decidedly towards populism. Maybe that’s just a function of loyalty amid a tough campaign: Everyone’s on board the Trump train unless and until it crashes, and if it does then they’ll reassess. But it’s also possible that a durable shift on the right towards populism will convince some “traditional” Republicans to exit the party, to the extent they haven’t already. In fact…

I’ve asked multiple Romney sources if this means @MittRomney is preparing to leave the Republican Party (I’m focused on “as the parties rush down a rabbit hole.”)

His spokeswoman is not the only one to answer with this emoji: 🤷‍♀️

But it sure isn’t “no” https://t.co/UTVaUeTytd

Romney’s own spokeswoman won’t deny that he might be leaving the party?

I assume his decision is contingent on whether Trump wins next month or not. If we get four more years of MAGA, with the president steering even further off the rails in a second term, Romney probably heads for the lifeboats. He’s one of the few senators in the country who might plausibly be reelected as an independent, such is his renown back home in Utah. Or maybe he doesn’t intend to run again in 2024, in which case there’s no cost to him in striking out on his own. But if Trump goes down in flames, I’d guess Romney will hang around for the big tug of war within the party about whether to follow a more traditionally conservative path going forward or to pursue nationalism without the Trumpy excesses.

Exit question via Steve Bannon: Will Trump run again in 2024 if he loses to Biden? That’s a popular idea among both MAGA and anti-MAGA but I don’t see it happening. Once Trump realizes that in “retirement” he can still exert influence over the GOP and draw an adoring online audience that hangs on his every word — that is, all the perks of being president without the hassle of having to do the job — he’ll love it. Plus, he’ll devote lots of energy after leaving office to cultivating the myth that he didn’t fairly lose the 2020 election and therefore remains unbeaten as a candidate. Running again in 2024 and losing, especially losing in the primary, would shatter that myth. And I do think there’s some risk that he’d lose the primary: As much as Republican voters will humor him in his belief that he was cheated by Biden, they know he’s run a bad campaign and many of them are exhausted by his shtick as well. They’ll want to bet on a stronger horse four years from now. And a younger one. Trump will be 78.