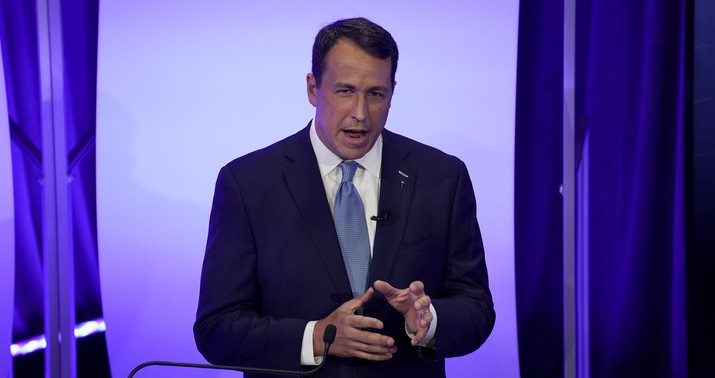 I was all set to tell you here that Cal Cunningham’s lead didn’t grow *because* of his sex scandal, it grew *in spite of* his sex scandal, due to completely unrelated reasons. Since last month’s polling in NC we’ve had a sudden Supreme Court vacancy; a new nominee for that seat; the president getting COVID; and North Carolina’s Republican senator, Thom Tillis, also getting COVID. That’s a lot for voters to drink in. Maybe the electorate cringed at Cunningham’s marital extracurriculars but cringed a little harder at everything else going on, giving him a boost.

But you know what? This poll from WRAL makes me wonder.

This is one of the funnier data points in a survey released this year:

Cunningham now holds a 49-39 percent lead over Tillis, who is seeking a second six-year term. That lead is up from 47-40 percent in Cunningham’s favor from a WRAL News poll conducted four weeks earlier…

While Cunningham still holds a sizable lead among women at 54-37 percent, Tillis ate into part of that lead – it was 54-30 percent a month ago – by picking up support from women who had been undecided in the race. Meanwhile, Tillis’ 11-point lead among men from a month ago has evaporated, with Cunningham now holding a slight 45-43 percent edge…

In the overall contest, Tillis leads Cunningham among voters 65 and older 50-44 percent, reversing Cunningham’s 49-41 percent lead a month ago. Meanwhile, Cunningham has dramatically widened his lead among voters ages 18 to 49, from 8 points last month to 20 points in the latest poll.

Guys — and younger adults generally — are now far more inclined to support Cunningham than they were pre-scandal. “Women see [the affair] as appalling behavior from a man, and a man sort of sees it as, ‘Well, he’s not so much of a church lady as I thought, this Cunningham fellow,'” said the pollster responsible about the data. Did Cunningham’s affair make him … more relatable to key voting blocs? In a year as cursed as this one has been for the GOP, I can almost buy it.

Another poll of the race out today from Monmouth also has Cunningham’s lead increasing slightly, from 47/45 last month to 49/44 now. Mercifully, the scandal does seem to have hurt him a bit, as he went from a 34/22 favorable rating last month to a 25/33 rating now. But voters in both polls don’t think it’s a big enough deal to switch their votes because of it. Just 14 percent told Monmouth that Cunningham’s behavior is disqualifying while 51 percent said it’s between him and his family. In the WRAL poll, 20 percent said they’d be much more likely to support Tillis because of Cunningham’s infidelity while 60 percent said his behavior wouldn’t matter to their vote. Considering that Cunningham’s overall lead has grown in both polls, it must be that the people who are most critical of his behavior were already largely in Tillis’s camp.

Cunningham has four things working for him right now to mitigate the fallout from his scandal. He raised a truckload of money last quarter. His opponent, Tillis, has a “scandal” of his own in that he picked up COVID around the same time Trump did, which ties him (symbolically, if nothing else) to the outbreak at the White House. Fifty percent of voters told Monmouth that Tillis didn’t take the pandemic seriously enough before he got infected versus 37 percent who said he did, so maybe Tillis’s particular personal flaw is weighing more heavily on people than Cunningham’s is.

The third thing helping Cunningham is that Tillis is a weak incumbent, frankly:

Tillis has never averaged as high as 44 percent in RCP’s tracker all year. Since late July, Cunningham has never averaged as *low* as 44. He spent the month of September hovering in the 46-47 percent range, then began creeping up above 47 percent circa October 1. His scandal broke two days later — and since then he’s gained nearly half a point, finally reaching 48 percent in the average today. That’s the first time he’s been that high in two months. Tillis, meanwhile, has rebounded a bit from his low point a few weeks ago but still hasn’t regained all the ground he lost in polling since mid-September. Looking at that graph, you’d have a hard time believing there’ll be a late break towards the Republican given the abiding resistance to him in polling thus far.

The last thing Cunningham has going for him, and probably the most important, is a relatively strong presidential candidate at the top of the ticket. Trump and Biden were nip-and-tuck in North Carolina from mid-August to the beginning of October, but the national trend towards Biden lately is showing up in NC too:

During August and September, Biden led only one poll of North Carolina by as many as four points. This month, following Trump’s COVID diagnosis and the first debate, he’s led by four in three polls in a row. If North Carolina’s swing voters are beginning to trend blue, no wonder that Cunningham is seeing his lead inch up despite his sex scandal.

The national picture’s getting hairy too:

Many Republicans told me that holding Democrats to just a 51-49 majority may be a *good* night for the GOP https://t.co/Ie9yYMyQkc

One rare bright spot for the GOP today is South Carolina, where the polls have been tied for weeks and where Democrat Jaime Harrison just recorded the most freakishly enormous fundraising quarter in the history of Senate elections. The latest poll has it 48/42 Graham in SC. Whether holding that seat matters much to the balance of power in the Senate this year remains to be seen, but any good news at this point should be savored.

WTAF?! Former Malaysian Prime Minister catches HELL over his thread on why Muslims have a right to kill millions of French people