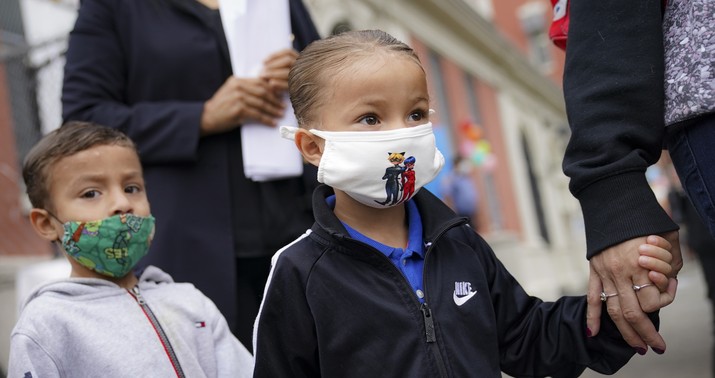 Remember this post? It described a study being conducted by an economist at Brown University on infection rates at American schools that reopened last month. The data at the time was slim, covering just the first two weeks of September. But it was encouraging.

How encouraging? Quote: “Tracking infections over a two-week period beginning Aug. 31, [researchers at Brown University] found that 0.23 percent of students had a confirmed or suspected case of covid-19. Among teachers, it was 0.49 percent. Looking only at confirmed cases, the rates were even lower: 0.078 percent for students and 0.15 percent for teachers.” Fewer than one in a thousand kids and around one in 700 teachers.

The same economist has a piece in The Atlantic today with new data from the second half of September. The bad news is that case rates were up in both groups. The very good and very important news is that they were *barely* up. Infections continue to be exceedingly rare at U.S. schools. In light of these numbers and the obvious risk to kids’ intellectual development by slowing down schooling, it’s obvious that school districts should be more aggressive in trying to reopen.

Since early last month, I’ve been working with a group of data scientists at the technology company Qualtrics, as well as with school-principal and superintendent associations, to collect data on COVID-19 in schools. (See more on that project here.) Our data on almost 200,000 kids in 47 states from the last two weeks of September revealed an infection rate of 0.13 percent among students and 0.24 percent among staff. That’s about 1.3 infections over two weeks in a school of 1,000 kids, or 2.2 infections over two weeks in a group of 1,000 staff. Even in high-risk areas of the country, the student rates were well under half a percent.

School-based data from other sources show similarly low rates. Texas reported 1,490 cases among students for the week ending on September 27, with 1,080,317 students estimated at school—a rate of about 0.14 percent. The staff rate was lower, about 0.10 percent…

Democratic governors who love to flaunt their pro-science bona fides in comparison with the anti-science Trump administration don’t seem to be aware of this growing body of evidence. On Monday, for instance, New York Governor Andrew Cuomo claimed that businesses were not “mass spreaders,” as opposed to schools, and subsequently announced that he would close schools in hot-spot areas.

Not enough evidence for you? Well, Florida reopened schools en masse in August and since then both daily case counts and deaths have been steady. Ditto for Texas, except that deaths are actually down a bit since August. A think tank in Switzerland recently looked at school reopenings across the globe to see if it could find a correlation between kids being back in class and infection rates rising. Nope:

IfE found that 52 countries that sent students back to school in August and September – including France and Spain – saw infection rates rise during the vacation compared to when they were closed.

In Britain and Hungary, however, infection levels dropped after initial school closures, remained low during the holidays, and began rising after reopening.

Full analysis of these 52 countries found no firm correlation between school status and infections – pointing to a need to consider other factors, IfE said.

You’re not in much danger if you’re wandering the halls of a school. To truly court death, you need to go to a dorm. Or a bar. Or the White House.

NPR reported this morning that the combination of some public schools closing and some parents giving up on remote learning as an inferior alternative to the classroom has led to declines in public-school enrollment across the country. Where are those kids who used to go to public school going now? Well, to private school if mom and dad can afford it. And if mom and dad can’t afford it…

Not all families have the means to send their children to private school, or devote a parent to home schooling full time. Some families, says Elizalde, will be leaving children home with older siblings or to sit in front of the TV…

Diane Schanzenbach, an economist at Northwestern University who studies redshirting, says starting kindergarten late has no long-lasting educational advantages and may even have some drawbacks, for example in lifetime earnings. And Chloe Gibbs, an economist at the University of Notre Dame, says decades of research have underlined the importance of early childhood enrichment for all children, and especially for children from lower-income and less educated families. “We have consistent evidence that these kinds of interventions can have big effects on children’s both short-term skill development, but really importantly, their long-term life chances.”

In other words, pre-K and kindergarten are the rare educational interventions that both narrow gaps and lift all boats.

A South Korean study showed that younger children are especially unlikely to transmit the virus relative to older ones. Lay aside middle schools and high schools; what’s the argument for keeping elementary schools closed at this point in light of the data above and the developmental damage done to younger kids from being out of class? Someone should ask the Churchill of the pandemic, Andrew Cuomo, as he goes about instituting another terrible, destructive policy for New Yorkers. It takes some special governmental magic to have been too slow to move in March, when the virus was about to cut a swath through NYC’s population, and too quick to move now, when kids are being tossed out of class because the positivity rate has inched up half a point. But he’s a magical politician.

Exit quotation from Anthony Fauci, who’s worried about the true hot spots in the United States: “I think the — the data speaks for themselves. We had a super-spreader event in the White House and it was in a situation where people were crowded together and were not wearing masks. So the data speak for themselves.”