McConnell: I haven’t been to the White House in months because they weren’t taking enough COVID precautions 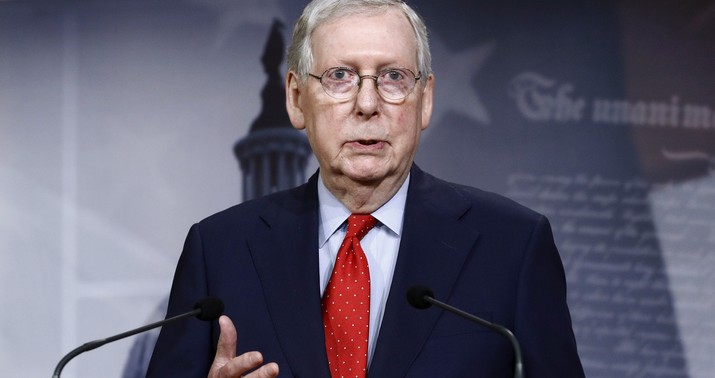 I thought I was inured to shocks from the news after enduring the past seven days but somehow this quote from McConnell to reporters this morning jolted me.

Sounds like Cocaine Mitch is headed for the lifeboats as the S.S. Trump begins to sink. He’s gotten everything he’s likely to get from his voyage, notably hundreds of Republican federal judges and no fewer than three Supreme Court appointments. No need to heroically go down with the ship.

Whether there’s room in those lifeboats for the more vulnerable members of his caucus who are on the ballot this fall is in serious doubt, though. These quotes were obviously designed to try to create that room, providing a bit of “social distancing” from the president for people like Susan Collins on the subject of the pandemic. Stay tuned for the Senate GOP’s closing argument later this month: “We have nothing to do with Trump’s filthy disease pit.”

At event in Kentucky today, McConnell also said: “If any of you have been around me since May the 1st, I’ve said, ‘Wear your mask. Practice social distancing.’ … Now, you’ve heard of other places that have had a different view, and they are, you know, paying the price for it.”

MCCONNELL: “I haven’t actually been to the White House since August the 6th. Because my impression was that their approach to how to handle this is different from mine and what I suggested that we do in the Senate, which is to wear a mask and practice social distancing."

In one sense, that’s a brutal thing to say. He’s essentially confirming the Democratic argument that the White House was reckless in failing to protect its own personnel from COVID. Which feeds right into the Democratic argument that Trump was reckless in failing to protect the country from COVID by pushing too soon to reopen businesses and not doing enough to encourage masks.

But in another sense, he’s just stating a simple truth. McConnell is 78 years old, part of the age cohort for whom COVID is most lethal. He’d be insane to spend time indoors in a place where masks are frowned upon, social-distancing isn’t policed, and people are being tested God knows how infrequently.

He saw political trouble coming for Republicans from Trump’s handling of the pandemic many months ago. As far back as May he was trying to counterprogram the president on masks, insisting that there should be no stigma in wearing one and repeating the point a month later. He even invited reporters to photograph him wearing his mask, hoping voters would view the pics as visual confirmation that most of the GOP leadership was doing the responsible thing and that their candidates shouldn’t be punished for Trump’s negligence. He knows what the polling says about mask-wearing, just like he knows that poll after poll this year showed most voters wanted to prioritize containing the virus over reopening the economy, another issue on which Trump was on the wrong side of public opinion.

But in the end, the president is the face of the party. All McConnell can do is continue to make statements like the one he made today and hope for the best.

Yesterday the Daily Beast published a piece about Republican donors beginning to give up on Trump and focus on the Senate instead. McConnell’s name came up:

[S]igns that some in the GOP are thinking of subtle ways to cut bait are starting to appear. Several operatives pointed to Senate Majority Leader Mitch McConnell’s increased warnings about Democrats expanding the Supreme Court, pushing for Puerto Rico and the District of Columbia to be granted statehood, and axing the legislative filibuster—all propositions whose likelihoods are predicated on Biden winning.

“He’s already moving into those talking points. And that is by design,” said one top GOP operative.

He has to be careful. To repeat a point I made last night, Trump doesn’t feel that he owes anything to the GOP so he won’t refrain from attacking McConnell or other GOP candidates if they start making a show of criticizing him. His ego won’t tolerate the disloyalty even if the criticism is strategic, to bolster an image of independence for a candidate like Collins in Maine. This has been the dilemma for congressional Republicans since 2016: Because Trump diehards are so devoted to him, there’s no way to make inroads with centrists by calling out his worst excesses without enraging his base. Collins has become a joke among politicos for her penchant of saying she’s “troubled” or “concerned” or “disappointed” or whatever whenever Trump says or does something outlandish. That sort of feeble condemnation isn’t nearly equal to the task, but it’s as far as she can go realistically without making MAGA voters furious at her. So both sides, Trumpers and centrists, end up being underwhelmed by her. She has yet to lead a single poll in her Senate race all this year as a result.

The obvious comparison at this moment is to the “Access Hollywood” episode, which happened four years ago to the day yesterday. Trump’s polls took a dive afterward; Republicans all over the map began running away from him, as McConnell’s doing right now; and in the end he had a solid second debate and came all the way back to win. Why couldn’t that happen again this time? The answer, I think, is that the “Access Hollywood” tape said something about Trump’s character but ultimately didn’t affect voters themselves. If you thought he’d be better for your bottom line than Clinton would, or if you thought that a sclerotic Washington establishment needed a radical shake-up, you could convince yourself to overlook it. That’s night and day compared to the pandemic. The Senate majority leader, a member of Trump’s own party, is telling us today that he didn’t feel physically safe in Trump’s White House because staff there didn’t care enough about a virus that’s killed 200,000+ people to protect even themselves. “Reckless” doesn’t scratch the surface. The “Access Hollywood” tape was boorish but America’s pandemic is a humanitarian catastrophe and a national humiliation. That’s the difference.

Hot Mic: Kamala Doesn't Know Where She Is On the Campaign Trail

Beverly Hills to shut down Rodeo Drive on election day over fears of… what?

Things that make you go hmmm