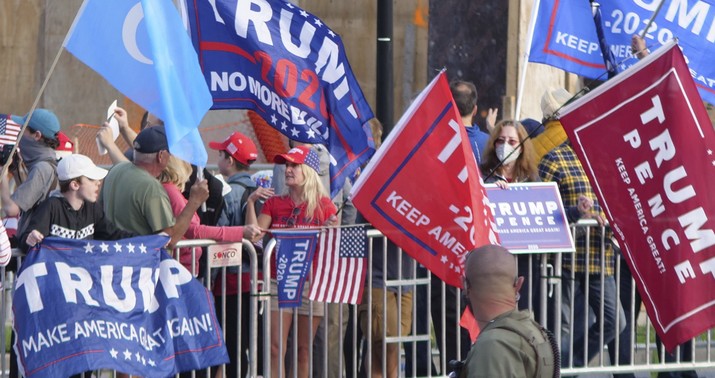 I continue to believe that this is a smart move even though it goes against conventional wisdom and, er, even though it’s a strategy borne of necessity. Obviously it’s *not ideal* that they’re ceding the airwaves to Team Biden in states they need to win; they’re being forced to do triage because they’ve blown through their war chest and Democrats are posting mind-boggling numbers in outraising them.

But how can there be any marginal utility left in an ad dollar spent on behalf of the most ubiquitous and possibly most polarizing president in American history? What minuscule percentage of Americans remain undecided on Trump after five years of the daily circus — and of that group, how many remain persuadable by something as anodyne and formulaic as a campaign ad?

Even if Bill Stepien had a killer ad and the bucks to run it everywhere, Trump’s just going to end up stepping on it. There’ll be a tweet, or a weirdo photo op on the White House balcony sans mask while he battles COVID, or a hot new Twitter video in which he advises Americans to stop worrying about getting the virus because they can just go to the hospital like he did.

He’s going to set the message, as always. And he’ll have a billion media outlets willing to carry that message for him for free, some in the belief that doing so will help him win voters over, most in the belief that it’ll alienate them. His entire theory of the election is that he doesn’t need to pander (much) to centrists and swing voters because he’s going to get his fans so jacked up to go to the polls that they’ll end up swamping Biden’s turnout. All of that being so, he’d be a fool to spend another dime on advertising and wise to spend everything on turnout operations. Which, it seems, is basically what he’s doing.

[Trump has] been off the local airwaves completely in Iowa and Ohio. The campaign also has given up at least $2 million worth of reservations in both Michigan and Wisconsin since early September. And in Minnesota, a state Trump almost won four years ago and has expressed confidence in flipping, his team already has chopped about $5 million from its projected fall TV budget…

The Trump campaign, meanwhile, according to data shared by Democratic ad trackers, has in recent weeks boosted its TV presence in the Sun Belt battlegrounds — Arizona, Florida, and Georgia — and Nevada, a state Trump lost in 2016…

“I don’t think the spin is in any way congruent with the reality,” Nicholas Everhart, an Ohio-based Republican ad maker, told BuzzFeed News. “There’s no reason why [Trump] would not be wanting to be on the air in those states, particularly Ohio, at this moment. Clearly there are some unpleasant financial realities impacting the strategic decisions they are making.”

Giving up on Iowa and Ohio in order to focus on Florida, Arizona, and Georgia is an understandable calculated gamble. Trump won IA and OH comfortably in 2016. He’s in a dogfight with Biden in both states right now but might believe, not unreasonably, that in the end the sheer size of his margins there four years ago will carry him to a narrow victory this year. FL, AZ, and GA were all tighter races against Clinton, by comparison; Biden leads by several points in each at the moment and is competing in all three aggressively. Trump has little choice but to focus on them.

As for Michigan and Wisconsin, the campaign may be weighing whether to give up on them. Both turned red by razor-thin margins in 2016 and Biden is leading both fairly comfortably right now. Team Trump may soon make a very hard decision to treat both states as lost and focus on holding Pennsylvania instead. He can get reelected without MI or WI but it would leave him with virtually no margin of error anywhere else. We may be approaching that stage of desperation.

The Biden campaign is naturally pressing its financial advantage by expanding the map of states where it’s running ads, forcing Trump to play defense:

Over the past two weeks, Biden had the airwaves to himself in Iowa, Ohio, Texas and New Hampshire, while Trump went dark, according to Advertising Analytics, a TV tracking firm. This week, Trump isn’t airing any ads in Nebraska, where both campaigns are competing for the lone Electoral College vote out of the Omaha-based congressional district, while Biden is dropping just under $500,000.

The spending disparity isn’t limited to Democratic “reach” states. Biden and his allies are also racking up ad advantages in the core battlegrounds that put Trump in the White House in 2016. Biden is out-advertising Trump in 72 out of 83 media markets where the campaigns are spending this week, including dozens of places that played a critical role in deciding the last election, like Philadelphia and Wilkes-Barre in Pennsylvania and Milwaukee and Green Bay in Wisconsin…

In Pennsylvania, where Biden has spent $17 million in the last three weeks to Trump’s $7 million, Democratic outside groups have poured in another $14 million on top of that, while GOP groups have put in $8 million.

Throw everything into turnout operations and let Trump run the “ad” campaign himself with his public messaging. If he ends up alienating 60 percent of the country and loses by 10 points, oh well. He got the campaign he wanted. Meanwhile, a hard decision is approaching for the RNC and Republican donors: At what point do you give up on Trump and start throwing everything you have left at saving the Senate? Two or three very close Senate races may now be the only thing standing between a Biden presidency that aggressively pursues a left-wing agenda and a Biden presidency mired in gridlock. Ditching Trump early would free up scarce dollars to rescue Susan Collins and Lindsey Graham.

Although maybe that’s a fallacy. If Trump ends up in free fall, are there realistically likely to be so many ticket-splitters in Senate battlegrounds that they’ll send Biden to the White House with comfortable margins and Republicans back to a Senate majority? A Gallup poll published last week found that a record-high number of Americans favor single-party control of government. A lot of voters out there don’t want gridlock, which is bad news for the party that’s trailing right now.

And on top of all that, there’s the problem of Trump being Trump. How do you suppose a narcissist obsessed with loyalty would react to news that Republican officials and donors have decided to stop spending to help him win and to focus on, say, Graham instead? A traditional politician would want his party to succeed even if he personally failed, but Trump doesn’t care if the GOP is locked out of power for the next hundred years. He sees it as a vehicle to serve him. He owes it nothing in return.

If he’s looking to make an ad splash against Biden, I’ve got a killer idea for him that won’t cost him a penny (although it’ll cost you and me, and the next generation, a lot) and will impress voters a lot more than the sort of pap both parties are used to putting on TV. It’s simple: Stop being an idiot about stimulus negotiations, make a deal with Pelosi, and then do a big victory lap every day in press events touting yourself as the man who rescued working-class Americans from the brink. Word came this afternoon that he was being “briefed on stimulus talks,” which came as a surprise since yesterday he announced that stimulus talks were over until after the election. Last night he took to Twitter to do damage control after reaction to that announcement proved ugly, demanding that Congress send him smaller bills targeting the more popular parts of the stimulus talks instead:

The House & Senate should IMMEDIATELY Approve 25 Billion Dollars for Airline Payroll Support, & 135 Billion Dollars for Paycheck Protection Program for Small Business. Both of these will be fully paid for with unused funds from the Cares Act. Have this money. I will sign now!

If I am sent a Stand Alone Bill for Stimulus Checks ($1,200), they will go out to our great people IMMEDIATELY. I am ready to sign right now. Are you listening Nancy? @MarkMeadows @senatemajldr @kevinomccarthy @SpeakerPelosi @SenSchumer

No one knows whether this means talks are back on, or they’re not and he’s just posturing, or some strange third Trumpy option that no one but he has considered yet. But Senate Republicans seem excited by the possibility that a deal might yet be reached before Election Day:

Pelosi wants feds to borrow $400B to bail out states. Better idea: let states borrow money themselves, perhaps with a federal guarantee (to secure favorable terms) & seniority. Break the stalemate, get a deal done. This is critical for unemployed, small businesses & the economy.

It has many good things for individuals and businesses.
https://t.co/M7HvwCv9MS

Stay tuned. I’ll leave you with this unfortunate video of Martha McSally from last night’s Arizona Senate debate. Even if Republican leaders begin moving money away from Trump’s race to Senate battlegrounds, I doubt she’ll see much of it. She’s cooked.

Martha McSally refusing to answer a debate question about whether she’s proud of her support for Trump is peak cringe pic.twitter.com/NaLpoeqPsU

Report: There's Another Hunter Biden Laptop in the Feds' Custody