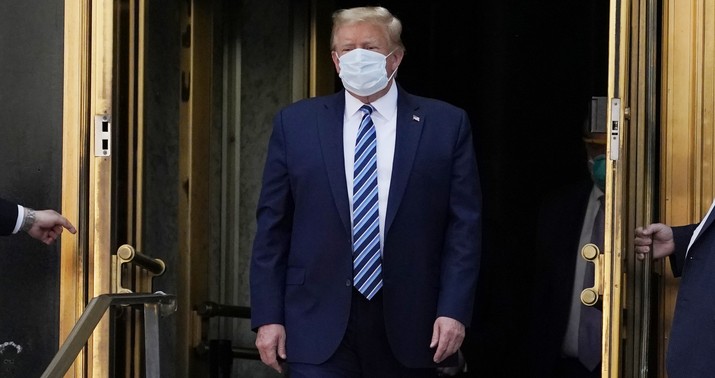 The president's doctor has released a new update, which says Trump has "no symptoms" but also offers fewer specifics than yesterday, doesn't say whether he's received his fifth and final dose of remdesivir and hints at ongoing concern with oxygen levels. pic.twitter.com/erkDmCQb4O

Doctors on Twitter are grumbling that Sean Conley’s been slippery before about Trump’s condition and that he’s notably terse in this new memo. Nothing about the president’s lungs, nothing about supplemental oxygen, nothing about the drugs he’s taking. Depending upon how suspicious you are, you might read extra meaning into the word “reports” too. That suggests Conley is deferring to Trump’s account of what he’s experiencing instead of describing what he’s observing independently.

But there’s circumstantial evidence that Trump really is improving. For one thing, he sounds like his old self:

Did anyone get to see that absolute “Joke” of a Town Hall interview that Joe Biden did with Concast @NBCNews , hosted by Lester Holt? What a disgrace to our Country that FREE public airwaves can be used that way. All SOFTBALLS. A big FIX. Time should be paid by the corrupt DNC!

He’s also participating in stimulus discussions and reportedly eager to get back to the West Wing:

LATEST: Trump this morning wanted to go to the Oval today. It triggered a discussion among aides. He's still in the residence right now.

If he really does seem back to normal before Thursday, just one week removed from his diagnosis, public interest in that experimental Regeneron treatment he received will be intense. That’s the one drug Trump has been given that isn’t available to anyone else (yet). It’s not supposed to be a miracle cure; it supplies the body with a flood of antibodies while the immune system is still busy producing its own. But there’ll be a clamor for it if the president went from testing positive on day one and being hospitalized with dropping blood-oxygen on day two to returning home on day four and working on day five.

Which reminds me: Why hasn’t Trump received either of the two medications he’s invested so much rhetorical energy in over the past six months? Neither hydroxychloroquine nor convalescent plasma have been part of his regimen even though his doctors haven’t been stingy about trying unproven drugs on him. The Regeneron cocktail is the most notable example but Trump reportedly has also taken famotidine, the active ingredient in Pepcid. There are indications that that might work to produce better outcomes in COVID patients, although nothing solid yet has come from any clinical trial. If his physicians are willing to kitchen-sink his treatment by including famotidine, why not toss plasma and hydroxychloroquine into the mix too? I’m sure Trump asked for both.

Some MAGA fans and/or hydroxy boosters are pissed off that he hasn’t been given the medication:

Whoever told the president to stop taking HCQ should be punched in the face. This did not have to happened. I am so upset. This is our president for crying out loud. No one need to get sick or pcr positive. #HCQ4prevention

On Monday, the talk show host and “PragerU” founder Dennis Prager blamed the “communists running medicine” for suppressing discussion about hydroxychloroquine, but questioned why it hadn’t come up in Trump’s treatment plan…

The fringe website LifeSiteNews took things a step further, with co-founder and hydroxychloroquine evangelist Steve Jalsevac urging readers to literally “contact the White House to ask why the president and Melania are not immediately being given this well-proven-in-practice medication protocol for COVID infection.”

That “miracle” treatment that The White House all but forced that weakling @SteveFDA to authorize in August?

Notice that Trump has not received it?

You could understand excluding both if his doctors were being sticklers about giving him only those medicines that have cleared the bar of clinical efficacy. But they aren’t. They were willing to try Regeneron’s drug and Pepcid on him in addition to proven meds like dexamethasone. Do they have reason to believe that hydroxychloroquine or plasma might mix badly with one of the other medications they’ve given him? If not, why withhold those meds from him?

My best guess at an explanation is that they realize that any drug the president is given will capture the public’s imagination if he recovers from the disease, especially if he recovers quickly. Knowing that, they’re okay with giving him famotidine because that’s widely available over the counter and can’t do much harm. They’re also okay with giving him Regeneron’s drug because that’s *not* widely available. Even most doctors can’t get their hands on it yet. But they might be worried that adding hydroxychloroquine to the mix of what will likely prove to be a successful course of treatment will only end up kickstarting another HCQ craze among Americans despite the fact that there’s no way to tell if that drug or any other Trump may have received has done anything for him. That is, maybe Conley and the rest of the team considered that the evidence of hydroxychloroquine’s efficacy is small and the damaging effects from a national shortage if everyone were suddenly demanding the drug from their doctors would be large. (E.g., lupus patients who need it could find the drug scarce.) So they decided not to give HCQ any more unwarranted free press.

I still don’t understand why he didn’t get plasma, though, as that’s not widely available either. There shouldn’t be any fear of a national “run” on it leading to shortages if it were administered to Trump. All I can think is that maybe plasma was deemed an inferior alternative to the Regeneron treatment. If Trump’s already getting antibodies from that cocktail, he logically wouldn’t need more from someone else’s plasma.

Anyway. The good news about his condition today is balanced by bad news elsewhere. Just because he’s (hopefully) past the worst of it doesn’t mean the people around him are. The outbreak inside the White House remains ongoing:

The Chairman of the Joint Chiefs of Staff Gen. Mark Milley, and all the members of the Joint Chiefs except for @CMC_MarineCorps are now self-quarantining after the Vice Commandant of the Coast Guard tested positive for coronavirus, US defense officials tell @barbarastarrcnn https://t.co/TZ2ClbldI0

I’m curious to know how the Coast Guard commandant thinks he got the virus. Was it from McCarron? Was it from Trump? Someone else? Hmmm:

Milley was also there.

Ray was at the Pentagon on Friday, October 2, the USCG spokesperson said.

September 27 was one day after the suspected superspreader event at the White House announcing Amy Coney Barrett’s nomination. The commandant was in the building.

I’ll leave you with this clip from yesterday of Sanjay Gupta making an overlooked point about Trump’s treatment. Because the Regeneron cocktail isn’t publicly available right now and because Trump is on so many other medications, including remdesivir and dexamethasone, it may be that no one else in the world has gotten the combination of meds he’s getting. What side effects that combination might induce may be completely unknown to science. Cross your fingers and hope for the best.

"The president may now be on a regimen that very few, if any, people in the world have been on." – @drsanjaygupta