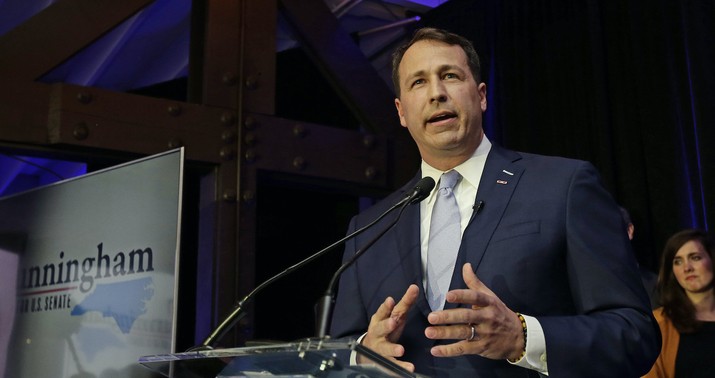 Ed wrote on Saturday about the first cheating claim in the curious case of Cal Cunningham, a man presently distinguished by three things.

2. He raised $28 million in the last quarter, which is crazy-bananas even by the lofty standards of Senate Democratic candidates amid the post-Ginsburg donation frenzy on the left.

3. The scandal that was revealed a few days ago featured some of the lamest sexts you’ll ever read, barely spicier than 10-year-olds passing each other “Do you like me? If yes, check this box” notes across the classroom.

It’s why I now think Tillis is the favorite to win. No voter with a smart phone and a functioning sex drive can read those messages with anything other than pity and contempt.

More seriously, Cunningham’s scandal is an interesting test of whether a swing-state electorate is willing to punish a candidate for infidelity in 2020 or whether Americans are so inured to it by now that they’ll shrug it off. One possible answer: It depends on how extensive the infidelity is. A single indiscretion might be dismissed as unfortunate but a private matter between husband and wife. A series of indiscretions would suggest a deeper problem — callousness towards one’s spouse and a chronic habit of bad judgment.

The National File, which broke the news of Cunningham’s first scandal on Friday, is back today with another claim. All they have to go on right now is an accusation made on Facebook, but the person who made it did so under her own name. She’s a lawyer who works in criminal justice, not someone who’d casually defame another person, one would think (hope?). Quote:

[Erin] Brinkman, a criminal justice lawyer who graduated from Harvard and spent time in North Carolina, says she has a “good friend” has has been in an affair with Cunningham since 2012.

“He’s been having an affair with a good friend of mine since 2012. Not the woman mentioned in the story. Needless to say, my friend was devastated. But my feeling is, if they’ll cheat WITH you, they’ll cheat ON you!,” Brinkman writes on Facebook. Brinkman does not appear to be partisan, as her Facebook page features a John F. Kennedy quote stating, “Let us not seek the Republican answer or the Democratic answer, but the right answer.”

Not much to go on in isolation, although this LinkedIn page for a person who appears to be the same Brinkman says she worked for Cunningham’s steering committee when he ran for Senate 10 years ago. But it became more noteworthy this afternoon when Cunningham announced that he was mysteriously withdrawing from a town hall event scheduled for this evening:

A U.S. Senate town hall scheduled for Monday afternoon is off. Unfortunately @CalforNC has backed out. Organizers will try to reschedule. #ncpol #ncsen

Team Cal didn’t want to face some awkward questions, it appears. David Graham sees the race now as a sort of referendum on where voters stand on sexual scandal post-Trump, post-post-Clinton, and post-post-post Kennedy:

There was indeed a brief moment when politics seemed consumed by a sort of neo-puritanical backlash against the permissiveness afforded earlier offenders such as John F. Kennedy. From 2020, that looks more like a blip than a sea change. Bill Clinton not only survived his impeachment but came out more popular, and if his reputation has suffered in recent years, it’s because of the dawning realization that Clinton’s behavior was abusive, not because it was adulterous. Politicians such as former Senator David Vitter and former South Carolina Governor Mark Sanford realized they could survive sex scandals by simply declining to leave office.

Trump marks the apotheosis of this trend, as a serial philanderer and self-proclaimed sexual assaulter who has depended on evangelical Christian support. In the Trump era, Cunningham’s text messages seem quaint. It is difficult to extrapolate to one race, especially one as tight as the Senate race in North Carolina, but the overall trends, and the outrage fatigue of the past four years, point to a real possibility that the scandal won’t make a huge difference.

That’s how I’d bet, that it won’t make much difference for the simple reason that most Americans seem to vote nowadays based on what they despise, not what they support. Cunningham is as bland a candidate as one could imagine (or was, until the sexting stuff came out) yet he’s leading an incumbent senator and putting up historical fundraising numbers. That’s not because North Carolinians are excited about him, it’s because Democrats there loathe Trump and Thom Tillis, one of the president’s more loyal Senate servants. If you were voting for Cunningham last week as an “Anyone But Trump” expression of disapproval then you’re probably voting for him even if he’s caught stumbling out of a brothel at 2 a.m. In fact, a new poll out today from the lefty outfit PPP finds him still ahead of Tillis by six in NC. Tillis’s favorable rating is considerably worse than Cunningham’s (-23 versus -2), and Cunningham leads by 19 among independents even though 69 percent of indies have heard about him sexting with a woman not his wife.

Will those numbers stand pat if he’s forced to admit to a second affair? We’ll see. But don’t forget that Tillis is momentarily off the trail due to being infected by COVID, the political fallout from which is also unpredictable. Maybe he’ll get a sympathy bounce, but it’s just as likely that voters will blame him and Trump for the outbreak that’s infected so many Republicans on grounds that they were reckless about taking precautions. Don’t forget either that Dems and independents who might otherwise hold Cunningham’s indiscretions against him are well aware that Republicans have given Trump a pass on every sexual allegation tossed at him, including the ones that have proved true, like paying hush money to a porn star with whom he had an affair. Here’s a famous poll from 2016, when Trumpmania was raging among the GOP, capturing the right’s devolution on whether character counts:

I think there’s a teeny tiny but nonzero chance, though, that Cunningham’s sex scandal could decide the presidency. Right now he and Biden are each polling at around 48-49 percent in North Carolina. If just enough Democrats are ticked off at Cunningham to lose their interest in turning out, that could be decisive in tipping the state to Trump in his battle with Sleepy Joe. And North Carolina could be decisive in a tight electoral-college race. If that happened, it’d be the second election in a row where a Democrat’s inability to keep it in his pants cost his party the presidency.

Exit question: Is it possible that Cunningham pulled out of tonight’s town hall not because of a new cheating scandal but because … he got COVID from Tillis during their debate last week? Stay tuned.

What Do Senate Judiciary Republicans Plan to Do Now That Dems Are Boycotting ACB's Nomination Vote?

Joe Biden's Earliest Days in the Senate as Revealed in a 1974 Interview: Crass and Venal, Using His Office for Monetary Gain