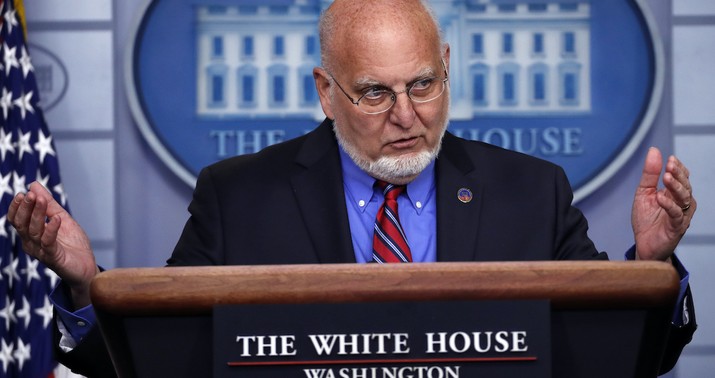 Who would be so stupid as to hop aboard a floating petri dish in the middle of a winter second wave of COVID-19?

Maybe there’s a market solution to this problem, then. Let the ships sail, doing their level best to keep passengers safe from infection, and if it doesn’t work out then public demand for cruises will adjust accordingly. We could even require that all passengers submit to two weeks of centralized quarantine upon coming ashore after the cruise ends, just to be on the safe side.

Although, wouldn’t that kill the industry as effectively as banning cruises would? Who’d buy a ticket knowing that it would mean two weeks in isolation after returning?

In a meeting of the Trump administration’s coronavirus task force [yesterday] in the Situation Room, Redfield argued that the government’s ban on cruise ships, which expires on Wednesday, should be extended until February 2021 because of the virus’ severity and the vulnerability for spread on cruises.

Vice President Mike Pence, who chaired today’s meeting, told Redfield that they would be proceeding with a different plan, according to two task force members.

What’s next: Instead of following Redfield’s desire — which a number of White House officials have argued is unreasonable — the Trump administration plans to extend the no-sail order for cruise ships until October 31. (That matches the endpoint of the cruise industry’s self-imposed ban.)

Axios adds, “Privately, some White House officials describe Redfield with disdain and try to paint his agency as a hotbed of the ‘Deep State,’ full of career officials determined to thwart President Trump.” Of course they do.

The major story here is that ships will be allowed to set sail in November, which may or may not have something to do with the facts that the cruise industry is important to Florida and Florida is important to Trump. You don’t need an electoral motive to see why the White House might not want to keep passenger ships docked for most of the winter: The industry’s hurting, jobs are on the line, precautions will be taken. Give ’em a shot. But there *may* be an electoral motive, for the simple reason that the White House clearly isn’t above strong-arming the CDC on its COVID guidance to make sure the agency is more in sync with Trump’s “return to normal” messaging. The president wants voters to believe we’ve turned the corner on coronavirus even though experts insist emphatically that we have not. If ships set sail, that implies normalcy is returning.

The minor-but-still-pretty-major story in this case is that CDC chief Robert Redfield is clearly frustrated with the administration nowadays and this won’t do anything to ease his frustration. He’s presided over a catastrophic failure in testing at the start of the pandemic, he’s been muscled by the likes of Scott Atlas and Michael Caputo on what his agency’s allowed to say, he’s been humiliated publicly by the president himself, and morale at the CDC has by all accounts reached subzero levels. Now his advice on how to contain the virus and protect the public this winter by keeping cruise ships docked is being rejected. Trump’s not going to fire him a month out from an election; the CDC retains too much respect among the public for him to make a move like that when voters already look dimly at his handling of the pandemic. But Redfield could quit. Being iced out on how to handle cruises might make it that much more likely. From the Times:

Dr. Redfield, who has been scolded by President Trump for promoting mask wearing and cautioning that vaccines won’t be widely available until next year, worried before the Tuesday decision that he might get fired, and had considered resigning if he were required to oversee a policy that compromised public health, according to a senior administration official as well as a person close to Dr. Redfield.

Here’s the thing: It shouldn’t be *that* hard to keep cruises safe. I remember someone months ago warning colleges about bringing students back to campus by comparing dorms to cabins on ships. That was ominous, since Americans learned from hard experience this spring that COVID can spread very quickly in cramped quarters on a cruise. But college kids mix with the general population and can pick up the virus from them, setting off a chain reaction when they carry it home to the dorms. That’s not a problem on a cruise, where the entire population onboard is isolated from the rest of the country.

Meanwhile, we have much more, and much more rapid, testing today than we had in February and March, when cruises were seeing outbreaks. The White House just announced a plan to ship 150 million quick, cheap antigen tests around the country in the next few months, in fact. Conceivably all passengers on a cruise could be tested every day for several days before boarding, then again once right before boarding. If everyone who gets on that ship is negative then no one can get infected. “The one thing that you want to make sure of is that the virus doesn’t get on there in the first place,” said one doctor to the Times about keeping voyages safe. We didn’t have the tech to do that six months ago. We do now.

There’s really no difference between a cruise and what the NBA’s done, quite successfully, with its “bubble” in Florida. The Finals start tonight; they’re going to make it through an entire playoff schedule, it appears, without any outbreaks. If they can keep the virus out despite being located in Orlando, a cruise should be able to keep it off a ship that’s out to sea.

And even if someone aboard turned out to be infected, that doesn’t necessarily mean a major outbreak is afoot:

❗️Did you know that *study after study* finds most people don't seem to transmit COVID at all? That a small percent is responsible for almost all infections? That R is not that informative? My new piece on why this may be key to controlling the pandemic. https://t.co/59YgSSHdEZ pic.twitter.com/veHa1BRwMO

Cruises will also be taking extra precautions to ensure safety, like requiring masks and upgrading air filtration, per the Times. So, sure, why not let them see if they can make this happen? And if they can’t, as I say, the market will respond. Quickly.

In lieu of an exit question, read this encouraging piece from Scientific American about how the Southern Hemisphere didn’t have much of a flu season this year. That’s really no surprise — all of the masking and social-distancing measures being taken to reduce transmission of COVID will obviously reduce transmission of the flu as well. But hopefully everyone here will get their flu shots anyway. The flu will still put a few people in the hospital, and hospital beds may be scarce if the second wave of coronavirus is as bad as experts fear.