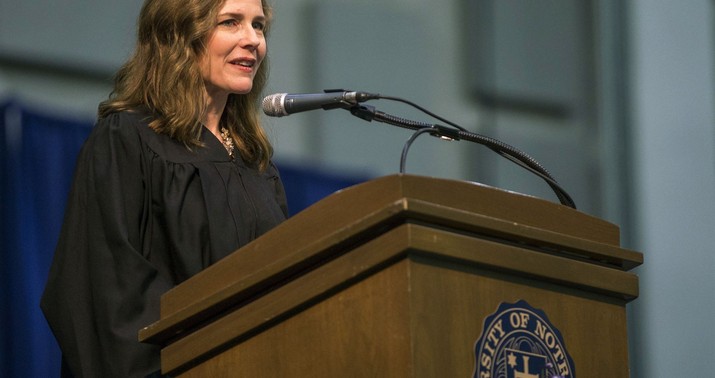 The least suspenseful Supreme Court nomination of my lifetime, and almost certainly of yours too. Who’s ever been more of a sure thing for a seat on the Court than Barrett was for Ginsburg’s seat, assuming that it was vacated while Trump was president?

In fact, the only suspense to this “process” is whether the White House ever considered another candidate. Barbara Lagoa’s name has been mentioned all week, and if you believe the reporting she really did have some advocates inside the White House. I can see Trump, ever transactional, taking a shine to the idea of appointing a Cuban-American woman from Florida to the seat, knowing how that might improve his election chances.

But, with no disrespect to Lagoa, the idea was farcical. Barrett is a known ideological quantity, Lagoa isn’t. If Trump had chosen her over a sureshot conservative like Barrett, Lagoa would have been attacked by righties as the new O’Connor every time she joined the Court’s liberal bloc on a decision. Besides, Trump lives in mortal fear of alienating his base, knowing that he lost swing voters years ago. He governs the country as if he’s the president of red-state America, correctly believing that he’ll need supernova turnout among his strongest supporters to win another term. Surely it was explained to him that, although Lagoa might help him in Florida, Republican activists would be extremely disappointed if he whiffed on a chance to put Barrett on the Court.

So that’s what he’ll do, says CNN.

President Donald Trump intends to choose Amy Coney Barrett to be the new Supreme Court justice, according to multiple senior Republican sources with knowledge of the process.

In conversations with some senior Republican allies on the Hill, the White House is indicating that Barrett is the intended nominee, multiple sources said…

Barrett has been the leading choice throughout the week, since Justice Ruth Bader Ginsburg died. She is the only potential nominee known to have met with the President in person, according to two of the sources. One source said Trump was familiar with Barrett already and he met with her since she was a top contender the last time there was a Supreme Court vacancy, when the President chose Justice Brett Kavanaugh instead…

“She was the plan all along. She’s the most distinguished and qualified by traditional measures. She has the strongest support among the legal conservatives who have dedicated their lives to the court. She will contribute most to the court’s jurisprudence in the years and decades to come,” according to a former senior administration official familiar with the process.

He didn’t even bother interviewing Lagoa this week, if I’m not mistaken. Barrett was the only person seriously considered for the job.

She’s a former Scalia clerk, a law professor, and an appellate judge for the last few years (where she’s already authored at least one noteworthy decision), which means her SCOTUS resume is all one could hope for. She’s reportedly well-liked and well-respected by her colleagues. She’d have been a shortlister with a solid shot at a Court seat under any circumstances. What’s given her a special stature, I think, was Dianne Feinstein’s ugly and foolish objection at Barrett’s Seventh Circuit confirmation hearing a few years ago that “the dogma lives loudly within you,” an insinuation that Barrett might be too devoutly Catholic to carry out federal law in an impartial way. That moment went viral in activist circles, insulted Christians, and, most importantly, made her something of a culture-war martyr. If Donald Trump isn’t willing to thrill his base and own the libs by putting a culture-war martyr whom lefties impugned on the Court, why does the Trump presidency exist? How could he have chosen anyone but Barrett?

There’s another reason why her selection was a fait accompli. We can chatter about the nuances of what the GOP did in 2016 (we had divided government then, and it was a Republican seat) compared to what it’s doing now (unified government, Democratic seat) in order to fashion some sort of “principled” argument for why it was appropriate to hold open the seat then but fill it now. It’s all horsesh*t. They blocked Garland because they wanted that seat to go to a Republican and they’re filling Ginsburg’s seat because they want that to go to a Republican too. It’s power politics, red in tooth and claw. They have full legal authority to do it — just as a government controlled by Democrats would have full legal authority to pack the Court, let me gently remind you — but certainly the gross hypocrisy displayed between then and now is going to make an already toxically cynical process even more cynical going forward. It will stick in the craw of Democrats, left-leaning independents, and those of other stripes who simply want a less ruthless politics for the country. What makes it even worse, Tim Miller noted in a piece a few days ago, is the unusual degree to which the minority calls the shots politically in America 2020:

I want you to step back and look at our republic through the eyes of a 21 year old who lives in a median American city and who wasn’t educated about our infallible nation by the new Patriotic Common Core Curriculum.

They were born in 1999. Two of the three presidents in their lifetime were elected by minority vote. The only one who was twice elected with a majority vote was denied the opportunity to nominate a Supreme Court justice based on some quite shaky arcana and phony rule-making that they think was largely political bullshit. The president they know the best has a complete disregard for the law or political norms, received about 3 million fewer votes than his opponent, had the help of a foreign enemy, was impeached for soliciting illicit foreign help again and not removed from office. After all that, he did exactly the thing that his party said the black president who had actually received a majority vote couldn’t do in an election year.

Pretty much every person this 21 year old knows is looking for a job in one of the dynamic largely democratic cities where all the growth is in the country but most of these enclaves have minimal national political power and their vote is irrelevant. In the Senate, the Republicans hold a majority of the seats representing states that make up a minority of the country. Nate Silver tells them that for Joe Biden to be assured to win the electoral college he needs to win the popular vote by about 5 points. 5 points!

Americans have long accepted that, under the electoral college, it’s possible for the candidate with the most votes nationwide to lose the presidency. It’s a quirk of our system, but one which people tolerate because it’s fluky. Except it’s not fluky anymore: If Trump wins again this fall, fully half of the last six elections will have been won by a party that received fewer votes than the competition. In all three cases, that will have been the Republican Party, which also happens to have won the popular vote exactly once in the past 28 years. The current president, who got fewer votes than his opponent four years ago, betrays not the slightest bit of anxiety or impulse towards conciliation as a result. Just the opposite — he governs as if he won 60 percent of the vote in an overwhelmingly Republican nation.

You can sniff that we live in a republic, not a democracy, or that the rules are the rules and that’s that. But a country where minority rule is the norm rather than a once-in-a-lifetime fluke is a country headed for a crisis of legitimacy. The fact that the GOP ruthlessly blocked Garland in 2016 and now will ruthlessly push through Barrett in a sped-up confirmation process even though this vacancy opened up much closer to the election than Scalia’s did four years ago will deepen the cynicism about the fairness of America’s politics. Since Ginsburg’s death was announced on Friday night and Republicans announced that they’d move quickly to fill the seat, the line that’s stuck in my head is the one David Petraeus famously said at the start of the Iraq war, looking past the easy takeover of that country and thinking ahead to how it could possibly be made to function durably and peacefully. “Tell me how this ends,” he said to reporters. Same here. As trust collapses between Americans of different parties and the lesson continues to be learned that one should be as ruthless as possible in any given situation, irrespective of what majority opinion might say: Tell me how this ends.

Anyway. All of that is just a long way of introducing the point that if you’re going to be ruthless and risk all of the long-term damage that comes from that — and it will come — then you should certainly make it worthwhile. That’s why it had to Barrett in this case instead of Lagoa or anyone else. If you’re willing to send the message that you’ll change the rules as needed to further your own side’s power, at least get your money’s worth with a superb nominee. Trump and McConnell are getting their money’s worth.