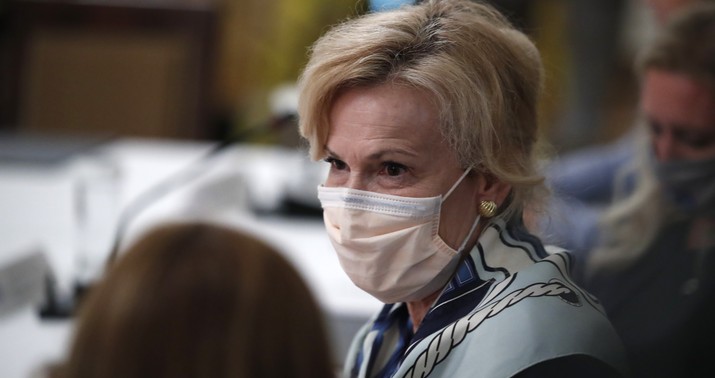 You can dismiss this if you like on grounds that it has a Jim Acosta byline. Or because it might be a byproduct of bureaucratic infighting, with sources making up nonsense and feeding it to Acosta to make Birx — and/or Atlas — look bad.

But bear this in mind: Given the reporting over the last few weeks, right now it seems like there’s not a single person in the federal government’s medical bureaucracy who’s happy in their job. If they’re not coping with Trump pushing misinformation to the public about a vaccine timeline, they’re being browbeaten by Trump or cronies like Michael Caputo to adopt scientific guidance that better suits his political agenda. Or they’re being exasperated by the spectacle of watching people boo the idea that masks are good practice in a pandemic. Or they’re being embarrassed by messes of their own making, from the CDC testing catastrophe in February to the CDC’s about-face this week on whether coronavirus is found in aerosols.

On top of all that, the number of deaths and daily infections that the U.S. continues to suffer is unrelenting. It’s better than it was two months ago but no one in the government wanted to be headed into fall with 30,000 cases and 800 fatalities per day. It’s not just a national tragedy, it’s a national humiliation. HHS, the CDC, the FDA, and the task force have presided over it.

The Hill reported this morning that morale within the CDC specifically has collapsed:

“I have never seen morale this low. It’s just, people are beaten down. People are beaten down partially by a public who not only distrusts us but who actually think we want to infringe on their civil liberties,” said one current CDC employee. “The other factor is the active undermining by senior members of our own administration.”

“As I talk to former colleagues at CDC, the feeling I get is just an overwhelming sense of despair. People are working incredibly hard to reduce the impact of the pandemic and the sense that they’re being blocked by people at the political level, and that the work that they’re doing is not being appreciated by the American public,” said Rich Besser, a former CDC director who now runs the Robert Wood Johnson Foundation…

“It’s horrifying. I don’t know of any other situation like this, when things have been dictated to be put on the CDC website that aren’t defensible science. The idea that you shouldn’t test contacts is just indefensible,” said Tom Frieden, who led the CDC during the Obama administration.

With all of that being so, and with Trump bringing in people like Atlas to tell him what he wants to hear about reopening businesses, etc, why wouldn’t Birx be “distressed”? What is there to be enthusiastic about right now apart from the vaccine, which really isn’t within her purview?

Once a fixture at the administration’s coronavirus briefings, Dr. Deborah Birx has confided to aides and friends that she has become so unhappy with what she sees as her diminished role as coordinator of the White House coronavirus task force that she is not certain how much longer she can serve in her position, sources familiar with her thinking tell CNN.

Birx has told people around her that she is “distressed” with the direction of the task force, describing the situation inside the nation’s response to the coronavirus as nightmarish…

“The President has found somebody who matches what he wants to believe,” a source close to Birx said of her view of Atlas’s relationship with Trump. “There is no doubt that she feels that her role has been diminished.”…

Trump has invited Atlas to appear at recent White House news conferences to field questions from reporters. Noticeably absent in the briefing room are Birx and Dr. Anthony Fauci, the government’s leading authority on infectious diseases.

Makes perfect sense to have a doctor like Atlas with no background in infectious diseases as the most influential expert in the White House on managing a once-in-a-century infectious disease. Why would Birx be “distressed” about that?

But really, that logic may be past its expiration date. We’re six weeks away from an opportunity to replace Trump. Birx is a figure with an unusually high profile by dint of her task force work this past spring and she wouldn’t be easy to demonize because of her credentials and soft-spoken demeanor. If the task force is as much of a sh*tshow as she allegedly thinks, she’s better off quitting and letting the electorate know that. We’ve already had one alumna of the group bail out, alleging that Trump doesn’t care and therefore the work the task force is doing is largely meaningless. That person, Olivia Troye, is keeping an eye on the Birx news today:

People can’t imagine the pressure she’s under from the political people in the White House. She’s working tirelessly under nightmarish conditions where there is no consideration for public health from the top. I saw this first hand. https://t.co/96qBF3gsba

What happens if Birx resigns and says, “Everything Troye said in her interviews last week is true”? Unpredictable.

But then, Birx also has to reckon with what that sort of criticism might do to further shake public confidence in the forthcoming vaccine. If she says Trump and Atlas aren’t up to the job and Trump gets reelected anyway, suddenly she’s on record as saying not to trust a guy who’s going to have to sell the entire country on getting vaccinated next year. Not optimal. Although maybe she would reason that she herself is sufficiently trusted by the public that she could vouch for the vaccine personally once the data on the phase three trials is available and thereby offset any damage she’s done to Trump’s credibility. “You can trust him in this case,” she might say.

She’ll probably stay put and keep her mouth shut. There are very few people like Troye willing to risk their careers to sound the alarm. Plus, Birx might reason that once the vaccine rolls out, there’ll be a bigger role for her again on the task force. Trump will want to leverage the public’s faith in her by having her serve as a vaccine ambassador. She’ll have to swallow her “distress” for now.

'Way to stand up for press freedom'! Proud journalist Jake Tapper is 'just suggesting' that the NY Post bend the knee to Twitter