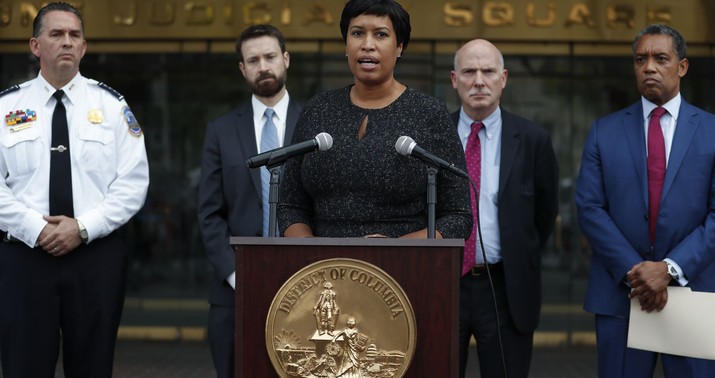 I can’t shake the suspicion that there’s a flaw in this approach.

“I really feel like I’m on glue,” tweeted Karol Markowicz, considering the logic of the plan.

Is there any way to heat an outdoor space in the thick of winter to a comfortable temperature *without* enclosing it? Dining has moved outside because ventilation helps protect people from inhaling viral particles. Enclosing an outdoor space defeats that purpose entirely. You might as well have people eat inside the restaurant itself and do what little you can to increase ventilation there. Dining indoors in D.C. with the windows wide open when it’s five degrees outside is probably marginally more pleasant than eating outdoors in the open air. Emphasis on “marginally.”

Reading Bowser’s tweet, my mind turned to those sideline heaters they use in the NFL when it’s icy cold on game day. But those are dangerous, and probably far too powerful for a cramped environment like 100 feet of sidewalk space. I don’t think they’re designed for sustained exposure either. You stand in front of them for a few seconds to get warm instantly; you don’t park yourself in front of one and enjoy a leisurely meal of chicken piccata.

Maybe smaller space heaters could get the job done at night in a balmy state like Florida, where the winter temperature might dip to 60 degrees. Heaters in close quarters conceivably might bring it up to 70. But in D.C. the idea is farcical. Bowser’s intentions are good, but why not spend the money instead on encouraging take-out dining somehow? Or just give the money to restaurants as a “here you go, hope this helps you somehow survive the next six months” act of generosity.

Coincidentally, within the past few days the CDC finally updated its official guidance on COVID to say that aerosols — small droplets, not large ones as in a sneeze — are believed to be “the main way the virus spreads.” Most Americans have been operating on that assumption for months, I think, but the determination has interesting implications for the winter. And not just for restaurants.

“There is growing evidence that droplets and airborne particles can remain suspended in the air and be breathed in by others, and travel distances beyond 6 feet (for example, during choir practice, in restaurants, or in fitness classes),” the agency stated. “In general, indoor environments without good ventilation increase this risk.”…

The World Health Organization recognized the threat of aerosols in July, after hundreds of scientists urged the international body to address airborne spread. It’s not clear why the CDC finally followed; Jimenez said high-ranking CDC officials were still arguing publicly against airborne transmission as a major vector as recently as late August…

“We have been saying ‘wear a mask’ and ‘6 feet apart’ for months,” tweeted Abraar Karan, a physician at Brigham and Women’s Hospital in Boston and Harvard Medical School. “Cloth masks are not designed to block aerosols. And 6 feet apart may be insufficient, esp indoors w/ poor ventilation.”

But wait, back up. Masks are … not effective against “the main way” the virus is thought to spread? Or they’re not highly effective? Big difference between the two. Given that states like Texas have seen infections decline after instituting mask mandates, I assume it’s the latter.

The fact that aerosols are a key mode of transmission for the virus may also help explain this fascinating little study from China, which found that people who wear glasses were curiously underrepresented in a sample of COVID patients they analyzed. That doesn’t necessarily mean that glasses are blocking the virus from entering the eyes. It could be that people who can afford glasses can also afford less congested living spaces for themselves, which means a lower risk of transmission. Or it could be as simple as people who wear glasses being less likely to rub their eyes or touch their face. But the aerosol theory of transmission would fit with a theory of glasses as a physical barrier to the virus entering the body. You’re unlikely to get large droplets exhaled by another person in your eyes (unless they cough or sneeze in your face) but tiny droplets that hang in the air for hours are a risk. Glasses might reduce that risk.

Maybe D.C. restaurants should use Bowser’s grants to buy goggles for all customers.

Here’s Fauci warning a few days ago that restaurants and, especially, bars are big trouble potentially in feeding a winter second wave.

Update: Annnnd no sooner did I finish writing this post than the new guidance on aerosols has disappeared from the CDC website. Was that a result of White House pressure to play down the risk from the virus or did the CDC sincerely screw up? Either way, what a sh*tshow.