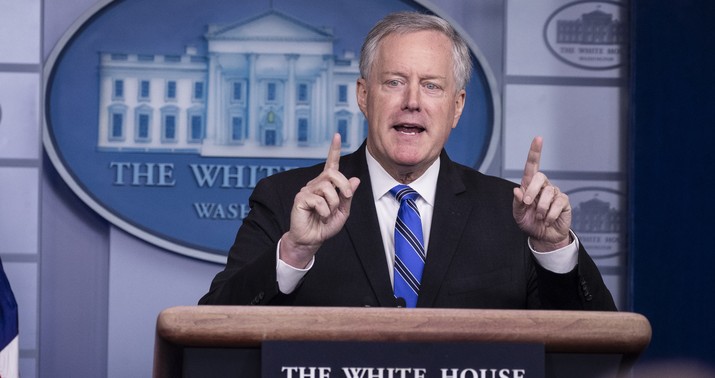 If you’ve read anything on polling this fall you know one of Trump’s foremost liabilities right now is his weakening support among seniors. In some polls he leads that group, in others Biden leads it, but it’s indisputable that Sleepy Joe is overperforming Hillary Clinton among older voters. And that’s a big deal (in Florida especially) since seniors, of course, are a group with famously high turnout rates on Election Day. Anything Trump can do to get them back in his corner before November would improve his odds at reelection significantly.

And there is something he could do. For months he’s been working on a deal with pharmaceutical companies to bring drug prices down, knowing full well which age group depends most heavily on medication. The Times reports this afternoon that the White House got close to that deal late last month, a political coup for Trump potentially in appealing to seniors. There was just one tiny sticking point. A snag, if you will.

The dumbest snag you’ve ever heard of.

According to the Times’s sources, the White House insisted that drug companies fund $100 prepaid cards to be mailed to seniors — before Election Day, of course — which they could use to pay for prescriptions. It wasn’t enough for Team Trump that they were about to announce a $150 billion package that would doubtless please seniors everywhere. They wanted a de facto cash bribe paid to every American over 65, six weeks out from the big vote. Pharma wouldn’t do it, whether because it’s so tacky and corrupt that they choked on it for ethical reasons or because they suspect they’re likely to be facing a Democratic administration in a few months that would have looked unfavorably upon their attempt to bribe voters on Trump’s behalf.

So the deal fell through. The White House’s huge, potentially gamechanging drug-price agreement was allowed to go by the boards because they couldn’t convince Pharma to bribe seniors directly instead of just in the aggregate.

Again, I’m stuck believing that they couldn’t possibly be so foolish and thinking “uh, sure they could.” I’m willing to believe that this is a smear manufactured by Pharma sources to make the White House look as bad as possible, but (a) White House sources confirmed the idea of the prepaid cards to the Times and (b) there’s a Pharma official on the record confirming it too.

White House officials insist they didn’t plan to emblazon the president’s name on the cards, which they envisioned sending to tens of millions of Americans to use for prescriptions. Mr. Trump, of course, has a long history of branding everything from skyscrapers to stimulus checks.

Regardless, one drug company executive said they worried about the optics of having the chief executives of the country’s leading pharmaceutical makers stand with the president in the Rose Garden as he hoisted an oversized card and gloated about helping a crucial bloc of voters.

“We could not agree to the administration’s plan to issue one-time savings cards right before a presidential election,” said Priscilla VanderVeer, the vice-president of public affairs at PhRMA, the industry’s largest trade group. “One-time savings cards will neither provide lasting help, nor advance the fundamental reforms necessary to help seniors better afford their medicines.”

Mark Meadows takes the blame in the piece for making the demand about the cards but it’s hard to believe a guy as smart as him would have let a deal like this get away over something as petty as that. The cards idea is obviously the brainchild of someone with no compunction about the appearance of overt bribery, who’s gone to unusual lengths before to make sure Americans credit him personally with payments they’ve received, who’s lately been telling federal employees that they should vote for him so that they don’t have to pay back the extra money they’re receiving from the dubious payroll-tax deferral he ordered. (Which is a lie, by the way. Unless Republicans take back the House in November, that deferred tax will likely be due in April.) Only a narcissist who fancies himself the world’s greatest negotiator could strong-arm his way out of a deal that might have helped him tremendously at the polls because his negotiating partner wouldn’t give him the most lowbrow demand on his wishlist.

Maybe I’m giving Meadows too much credit for intelligence, though. This made me laugh:

White House officials pointed a finger at PhRMA, maintaining that divisions in industry ranks over the financing of the agreement undermined negotiations. That’s precisely what Mr. Meadows told the trade group last month he would say if they did not reach a deal, according to a PhRMA email at the time.

He told them which lie he was going to use to explain why the deal blew up before he used it?

Pharma’s version of what happened is the least charitable spin for Trump. Here’s a more charitable possibility: Yes, the demand for the prepaid cards was made but it wasn’t a dealbreaker like the drug companies are claiming. Maybe it was a small thing which the White House quickly yielded on in the interest of singing the larger deal, which would make sense. Maybe there really is division in the ranks among drug companies over costs, but rather than admit that they’ve concocted this all-too-believable narrative that Trump’s ego made the cards a sticking point. This bogus story is their revenge on him for signing an executive order last weekend to cap what Medicare is willing to pay for prescription drugs based on what prices are in Europe. As for why Pharma would dare smear the president without fear of repercussions, that’s easy: They have leverage over him in the form of their vaccine trials. A vaccine announcement before Election Day might help Trump even more than an agreement on prescription-drug costs would. How aggressive can he be with them on this when he needs their cooperation on that?

There’s a middle-ground possibility too. Yes, the White House demanded the cards, yes, it was a big deal to them, but now that they’ve been embarrassed by this story they’re going to quietly do the deal and drop the cards idea. Trump obviously has a political interest in getting it done soon. He’ll lift the executive order in the interest of making it happen. And Pharma probably has a political interest as well, in that they’re better off with Trump in charge than a Biden administration that’s being leaned on by the left to push harder on Medicare for All. I’m guessing an agreement will be reached, sans cards. There’s just going to be some humiliation first over the president overtly politicizing yet another matter bearing directly on Americans’ health.