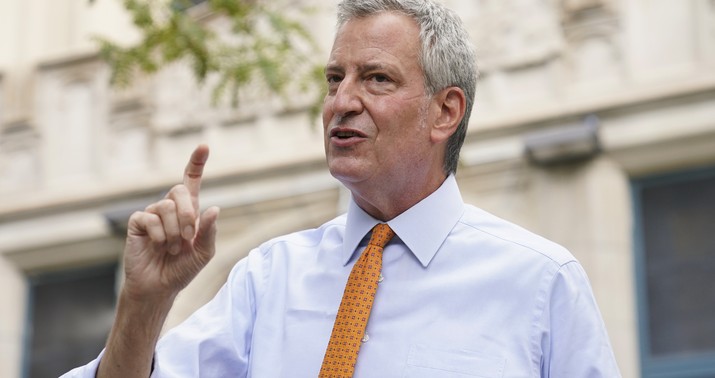 The point has been made before but bears repeating here: Planning for the fall school year and how to cope with the second wave after classes begin should have guided pandemic policy in New York and beyond *since spring.* It’s unimaginable that the country’s biggest public-school system is still figuring things out three weeks into September given how the availability of in-class instruction will dictate families’ lives for the next nine months, beginning with whether mom and dad can get back to work. And inexcusable that, rather than stick to a firm date for reopening and then adjust as infections arise, they keep scrambling people’s plans by delaying reopening at the last second.

How has this moron not been deposed yet by New Yorkers?

Mayor Bill de Blasio on Thursday once again delayed the start of most in-person classes in the New York City public schools, acknowledging that the system had still not fully surmounted the many obstacles that it faced in bringing children back during the pandemic.

The abrupt announcement was a blow to the mayor’s effort to make New York one of the few major cities in the nation to hold in-person classes. And it threatened to deepen concerns and confusion over whether the mayor and his administration had mishandled the reopening by announcing deadlines and then pushing them back.

Part of the failure is logistical. Regular COVID testing wasn’t set to begin for weeks, and contact tracing that had been done on teachers who’d already tested positive wasn’t moving quickly enough to limit new infections. But part of it is political, with the teachers’ union complaining to de Blasio about poor ventilation in buildings and being short-staffed due to some teachers opting out. The solution, for now, is to push back reopening — by a few days. Elementary schools will reopen on the 29th, says the Times, while middle schools and high schools reopen on October 1.

How that’s supposed to solve any of the underlying issues escapes me. Are teachers who are leery of returning to class going to be persuaded to do so en masse in the 8-10 days de Blasio just bought for himself? Are upgrades to ventilation happening across the entire city system in just the next two weeks?

Emailed a private school today to potentially send my 4yo. They have in-person, full-time school. I'm mad I need to do this and even madder that most won't have this option. School vouchers RIGHT NOW. The system has failed and we need to get the kids out. https://t.co/pmTzLWsAJq

The positive test rate in NYC has been stable since mid-June—below 1.5%, usually below 1%. Our neighborhood is like 0.5%. They’ve had three months to focus on this one big job of reopening schools. And they have utterly botched it, throwing families of 1 million kids into chaos.

The one good thing about New York’s spring catastrophe is that it seems to have induced sufficiently comprehensive immunity in the population that the positivity rate remains below one percent six months later. That’s New York’s “reward” for having endured the most gruesome COVID outcome of any place in America, by a country mile. In return for having elderly nursing-home residents culled en masse by Cuomo’s terrible policies, New Yorkers should be able to send their kids to school this fall — at least until the second wave makes that infeasible, assuming it ever does. Instead they’re being punished on both ends of the pandemic, first with an atrocious amount of death and suffering at the start of the year and sustained paralysis at the end of it, with no clarity whatsoever from the top about how and when things might change.

De Blasio’s attitude about all this? Eh, parents will get over it.

When asked about the last-minute change of plans for public school reopening, NYC Mayor de Blasio says many "outer borough" families are "pragmatic" and "understand the realities of life." pic.twitter.com/4TgbASbKbI

“I feel for any parent that has to make new arrangements,” he went on to say. “I know that people will do what they have to do.”

They have to leave the city, bro, that’s what they have to do. They need to strike out for greener, more competent pastures. In fact, the chaos is so bad that NYT reporter Eliza Shapiro says teachers are texting her asking for information because she has a better sense of what’s happening with their schools right now than they do:

Getting constant texts and emails from teachers asking me for more information on the announcement – one just said they “feel very stranded for information.” They have been in their school buildings preparing for reopening for a week. This is not how it’s supposed to work.

If the Department of Education doesn’t have enough teachers to fully staff schools, why did they start promising in-class instruction in the first place? Why not tell New Yorkers frankly what the situation is — “the teachers’ union runs the city now” — and go from there?

Free advice to middle-class New Yorkers: Get out. You’ve got more than a year left of de Blasio’s tenure, then probably four years of some equally progressive (if hopefully more competent) dipsh*t. The city won’t be what it was for a long time to come thanks to COVID, and until it is it won’t remotely justify the cost of living. Cut and run.