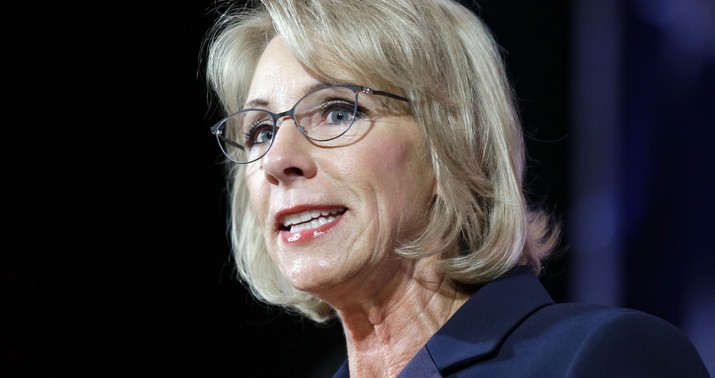 Sources are telling Tiana Lowe that this is a legit probe that the department is duty-bound to undertake after Princeton President Christopher Eisgruber wheezed about embedded racism at the school in a letter a few weeks ago. But all of the righties high-fiving over it on political Twitter this afternoon seem to be treating it as an elaborate troll aimed at forcing progressive academics to eat their own pandering words about rampant racism at their institutions.

It seems like a troll to me too. A clever one. Whether the federal government should be in the business of own-the-libs trolling is a separate question, of course.

But maybe it should? American politics is 95 percent culture-war fights and proxy fights now. Why not have the Department of Ed use its time and money to hassle disingenuous wokesters for laughs with an inquiry that’s almost certainly not going to end with Princeton losing its federal funding?

President Christopher L. Eisgruber published an open letter earlier this month claiming that “[r]acism and the damage it does to people of color persist at Princeton” and that “racist assumptions” are “embedded in structures of the University itself.”

According to a letter the Department of Education sent to Princeton that was obtained by the Washington Examiner, such an admission from Eisgruber raises concerns that Princeton has been receiving tens of millions of dollars of federal funds in violation of Title VI of the Civil Rights Act of 1964, which declares that “no person in the United States shall, on the ground of race, color, or national origin, be excluded from participation in, be denied the benefits of, or be subjected to discrimination under any program or activity receiving Federal financial assistance.”…

“Based on its admitted racism, the U.S. Department of Education (“Department”) is concerned Princeton’s nondiscrimination and equal opportunity assurances in its Program Participation Agreements from at least 2013 to the present may have been false,” the letter reads. “The Department is further concerned Princeton perhaps knew, or should have known, these assurances were false at the time they were made. Finally, the Department is further concerned Princeton’s many nondiscrimination and equal opportunity claims to students, parents, and consumers in the market for education certificates may have been false, misleading, and actionable substantial misrepresentations in violation of 20 U.S.C. § 1094(c)(3)(B) and 34 CFR 668.71(c). Therefore, the Department’s Office of Postsecondary Education, in consultation with the Department’s Office of the General Counsel, is opening this investigation.”

You can read Eisgruber’s letter here, including this passage near the end that suggests he’s aware of the legal boundaries in reducing racism in academic: “We can and will provide central support and increased accountability to enhance Princeton’s diversity, but there are limits, including legal restrictions, to what we can do or require as we press ahead with initiatives to diversify the University. For example, we cannot reserve jobs or specific positions for members of underrepresented minority groups.” What they can do is expand their attempts to recruit minority faculty and students, one of several reforms he proposes elsewhere in the letter. What’s gotten him in trouble with the government, sort of, is the stuff Lowe quotes in which he claims the university itself is guilty of the R-word.

Which is to say, what we have here is two different definitions of racism in conflict. The old-school statutory definition seeks concrete examples as a basis for denying funding: Has the school denied anyone a particular benefit or opportunity on the basis of race? Eisgruber’s definition is the gassier woke variety. “Racism and the damage it does to people of color nevertheless persist at Princeton as in our society, sometimes by conscious intention but more often through unexamined assumptions and stereotypes, ignorance or insensitivity, and the systemic legacy of past decisions and policies,” he writes in his letter. I think this exchange between lefties Bill Scher and Zaid Jilani captures the argument and counterargument against the probe well:

He said his university is racist, by law a racist university is violating the Civil Rights Act. It may be superficial trolling, but so was the University president's statement, which lacked any empiricism. Play dumb games, get the dumb prizes.

Since 1964, if an institution engages in racism, it is subject to federal investigation of how dollars are used. Don't use a word if you're not familiar with its meaning. And definitely don't redefine the word if you're still governed by the Civil Rights Act's definition.

Under the statute, “insensitivity” and stereotyping don’t seem actionable; the victim has to have been denied something tangible for liability to arise. Eisgruber’s admission that “conscious intention” sometimes fuels racism at Princeton is more interesting, but he can always point to racist incidents among the student body, not the faculty or administration, to support that claim.

Bottom line for legal eagles: Is there any chance here realistically, however slight, that one of the country’s most prestigious universities gets stripped of its federal funding because the guy in charge was sloppy with his woke palaver? I’m imagining Eisgruber sitting for an interview with the DOE, saying he knows of no case of anyone being denied a benefit on the basis of race, and then explaining that by “racism” he meant that the school needs more minorities on staff and that its curriculum doesn’t pay enough attention to the special hardships experienced by people of color in the western world but is working to change that.

Does anyone seriously believe that violates the Civil Right Act? How many man-hours and taxpayer dollars will be spent putting him through his paces to teach egghead lefties not to talk so freely about “systemic racism”? I feel like basically the same thing could be accomplished at zero cost by having Trump tweet about Eisgruber’s letter instead. “Can you believe Princeton’s president just admitted his school is racist? America’s students must boycott!”

Coincidentally, this Princeton news is breaking on a day when Trump is announcing a new executive order to teach “patriotic education,” which is his counter to the Times’s 1619 Project. Here he is earlier talking it up.

President @realDonaldTrump: we will “restore patriotic education to our schools…that celebrates the truth about our nation’s great history”https://t.co/V6ONCWexZ3 pic.twitter.com/Ryj4mcenuC