Weeks later, no sign of a “Kenosha effect” for Trump in Wisconsin polling 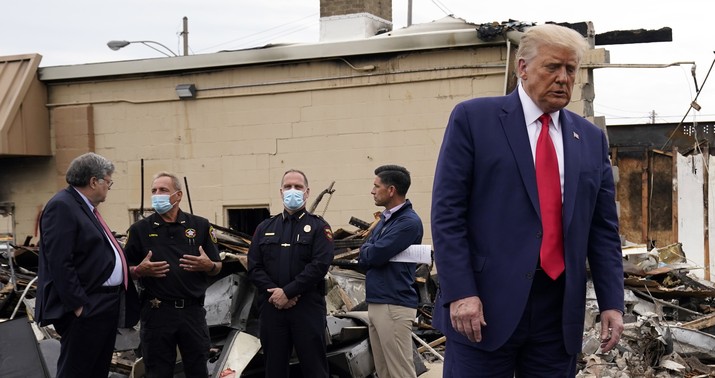 Not only is there no “Kenosha effect,” by which I mean a shift towards Trump in the polls as the “law and order” candidate after a burst of lefty rioting, but Wisconsin is actually Biden’s strongest swing state right now according to the RCP average. Various other battlegrounds have tightened up. Wisconsin is the exception, having turned bluer since the violent outburst following the Jacob Blake shooting in late August.

The latest poll of the state comes from CNN, which has Biden up 52/42. That’s his biggest lead in any poll there this month, but not implausibly so: Fox News had him up eight in a poll published earlier this month. What’s the secret to Biden’s advantage? He leads big among women and senior citizens — by 24 points among the latter group, which *does* seem implausible — but he also gets higher marks on handling Kenosha.

As with the Times poll of Wisconsin released a few days ago, I don’t think voters there prefer Biden because they think he’d be “tougher” on crime than Trump (although he does the lead president when people are asked who’ll keep Americans safe from harm, 50/45) but rather because they think he’s more likely to ease rather than inflame racial and cultural tensions that may be contributing to the violence. He leads Trump by 19 points on which candidate will unite the country and by 17 points on who’ll do more to reduce racial inequality. If Trump were offering an iron fist against rioters *and* an extended hand to peaceful anti-racism protesters, he might own this issue. All he’s really offering is the fist, though. Works for MAGA types, not so much for the rest of the electorate.

Here’s how the RCP polling average in Wisconsin has moved over the past three months:

It’s fine to ignore today’s CNN poll as an outlier, but note that Biden has led by six points or better in five of the last seven polls. There’s no reason to think the state is tight right now even if the Democrat’s not quite ahead by 10. Also, while it’s tempting to see the brief tightening in the average in late August in the graph above as evidence of a minor “Kenosha effect,” I’m skeptical. For one thing, the Kenosha riots had just happened; typically it takes days or weeks for public reaction to an event to show up in polling. For another, that tightening looks to have been driven by a single poll by Trafalgar that had Trump up a point. That jolted the entire average, but now that we’re several weeks removed from it, it seems the race has returned to the equilibrium of a lead of six points or so for Biden.

The one encouraging sign for Trump in Wisconsin during all this was a poll from well-respected Marquette Law, which had Biden up just four. But it’s possible that they’re lowballing his lead, notes the Times’s Nate Cohn:

We'll see what ABC/Post says tomorrow, but right now the story in Wisconsin seems quite clear.
And even the best poll result for Trump in Wisconsin (MULaw, Biden+4) still showed Biden up 7 with RVs, and had a particularly tough LV shift–which could easily be noise.

There’s just no solid evidence of any “Kenosha effect” in Wisconsin. Or nationally, for that matter: Biden led Trump by 7.4 points in the national average on August 25 and leads by 7.0 points today. The good news for Trump is that he *has* crept a bit closer to Biden over that same period in some other key swing states, most notably Florida, where he trailed by four on August 25 and is now down just 1.6 points. Pennsylvania has tightened as well:

It could be that there’s a “Kenosha effect” at work in those states, especially Florida since Cuban-Americans might be receptive to warnings about feral socialists burning down buildings. But one would think that if there was a pro-Trump backlash to lefty violence brewing in battlegrounds because of what happened in Wisconsin, we’d also see signs of it in, er, Wisconsin. Not so.

While we’re all busy obsessing over how anarchist violence might affect Trump’s polling, there’s an X factor here that may help explain Trump’s varying fortunes in Wisconsin, Pennsylvania, and Florida: Namely, COVID-19. Florida’s epidemic has been in decline over the past month after a summer spike and Trump’s polling has improved. Pennsylvania’s daily case count has been more or less flat for months while Trump has inched closer. Wisconsin’s experience is different. They’ve recorded some of their highest daily case counts since the pandemic began over the past few weeks, and their positivity rate looks like, ah, this:

CNN noted that Biden fared especially well in its poll today among women and seniors in Wisconsin, and coincidentally women and seniors were also much more likely than comparable groups to say they’re “extremely worried” about the pandemic. It may be that the local population’s anxiety about getting COVID bears directly on Trump’s polling in swing states, especially with news circulating about him having told Bob Woodward months ago that he downplayed the risk from coronavirus. If that’s true then Trump’s chances at a second term may depend on how bad the second wave this fall is, much more so than whether Antifa droogs are rampaging somewhere.