Ivanka Trump accepts challenge from “The View”: I’ll come on your show to get the COVID vaccine 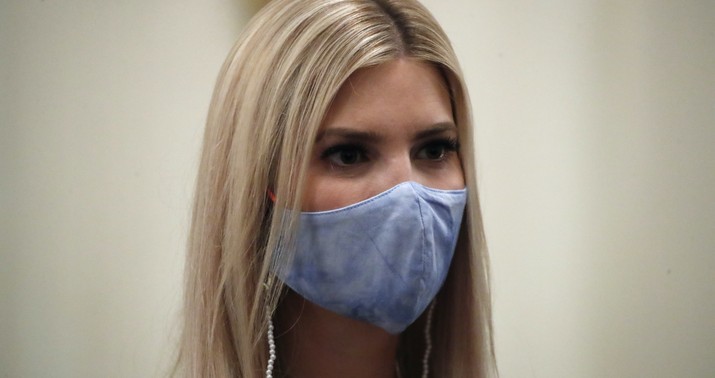 People are going to make dumb analogies to Putin’s daughter getting the Russian vaccine in response to this when, really, Ivanka should be praised. Considering the alarming degree of skepticism about the vaccine in the U.S., every person of influence who’s willing to vouch for it is useful to the cause of defeating COVID. Trump family members might be particularly useful in light of the MAGA base’s skepticism of experts. Who knows whether Anthony Fauci or Donald Trump Jr will do a better job of convincing populist Republicans that it’s in their interest to get the shot?

I ignored this spiel from Joy Behar on “The View” yesterday when I glanced at it because I thought she was making the simple point that Trump’s word alone won’t be enough to convince her that the vaccine is safe and effective. She went way beyond that, though. She sounds like a borderline anti-vaxxer here, stopping just short of asserting that it’s impossible to make a reliable vaccine in a year despite the galaxy of scientific opinion to the contrary.

Watch for the Ivanka bit at the end:

.@JoyVBehar reacts to Pres. Trump saying a COVID-19 vaccine is being prepared in record time: “He will push anything to get re-elected. Don’t fall for it.” https://t.co/f8u2wbJuik pic.twitter.com/QcwTiQSN79

Congrats to Behar on perfectly setting up one of the Trump children to make her look like a schmuck:

Deal @JoyVBehar. I would come on your show to do so.

I trust the FDA and so should all Americans. Vanquishing this virus should be our collective top priority. https://t.co/FXb0Dqjdio

Good for Ivanka. I hope “The View” takes her up on her offer, and not just because she deserves the opportunity to show Joy up on her own show. There’s a lot of work to be done to persuade Americans that it’s worth their while to get this shot:

The so-called “party of science” is barely north of 50/50 on getting the vaccine while the party of Trump is -24, never mind that the president’s going to treat the vaccine’s arrival — with plenty of justification — as the single greatest accomplishment of his tenure. We have a perfect storm of skepticism here. For righties, I think it’s their wariness of experts like Fauci that’s making them reluctant. For lefties, it’s their wariness of Trump, aided and abetted by the inexcusable attempts to pressure agencies like the FDA and CDC on matters like convalescent plasma and testing of asymptomatic carriers. Check this out:

Sixty-two percent of Americans, including 86 percent of Democrats, are worried that the FDA’s going to foist Trump snake oil on them before the election in hopes of winning him a second term. Even 35 percent of Republicans are worried about a bum vaccine being rushed out under political pressure. That speaks volumes about Trump’s and the administration’s diminished credibility, but it’s also an enormous obstacle potentially in getting people to line up for the shot — at least at first. Whether it’s before or after Election Day, Trump’s still going to be president (in all likelihood) when a vaccine is approved. Having him vouch for it should shift Republican opinion. If Biden succeeds him in January and inherits the role of vaccine pitchman-in-chief, that should bring Democrats along. Even if Trump gets a second term, the heavy coverage of medical experts vouching for the vaccine will jar lefty opinion loose. I think widespread vaccination of the population will be slow going at first but then ramp up like lightning next spring and summer as word of mouth spreads in social circles that so-and-so got the shot and feels fine.