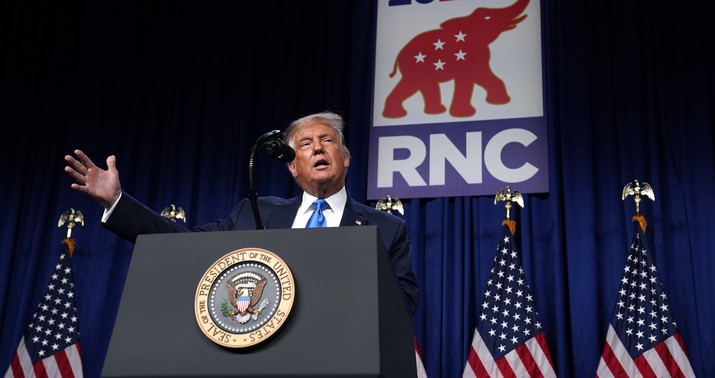 I try to give Trafalgar every benefit of the doubt after its stunning success in 2016 and 2018 but I’m a leeeetle skeptical of this one. Especially since they also have Republican John James leading incumbent Gary Peters for Peters’s Senate seat. That’s the first time James has led in any poll all year. Until today, the closest he’d been was three points behind a few weeks ago.

Another reason to be skeptical: This poll was conducted between August 14 and 23, a period encompassing the entire Democratic convention and before the Republican convention had begun. Is it impossible that Biden *lost* ground in Michigan, a state where he’s been leading since the start of the race, while his own convention was happening? Nope, not impossible. But conventions are designed to convince the public to warm up to their candidate. There were no disasters onstage for the Dems last week. It’d be odd if Biden lost votes in a state where he’d been strong until now because of it.

Of course, it’s possible that he lost ground for unrelated reasons, like rioting. But this poll wrapped before Kenosha went up in flames. Anyway:

There *is* corroborating evidence that Trafalgar is onto something here. Even if they’re wrong about Trump surging ahead, there’s little doubt that the race in Michigan has tightened over the past month. Just as Biden’s numbers have slid a few points nationally off of their high in late June and July, his once gaudy lead in Michigan has slipped. As of late July, the state seemed sufficiently safe for Democrats this year that Trump had temporarily suspended advertising there. In June, Biden had three polls in a row there in which he led by double digits. As recently as late July, CNN had him up 12.

The last five polls taken there have seen that lead cut in half. Two of them have Biden ahead by four, one by five, one by six, and then there’s today’s Trafalgar poll putting him two points behind. It’s a race again in Michigan. In fact, today’s numbers feel a lot like the final weeks of the 2016 polling in Michigan. Trafalgar became famous that year as the only pollster to actually have Trump ahead on Election Day in a state he went on to win, but Michigan had been trending towards him for weeks before that in other surveys. Just look at the dramatic graph RCP compiled at the time, starting in mid-October. Once again we’re seeing a broader polling trend towards Trump there capped by Trafalgar putting him in the lead.

So why am I (a little) skeptical? Simply because back in mid-June, at the height of the Biden boomlet, when various other pollsters (including the New York Times) had Biden with a commanding lead, Trafalgar had him up … one point. The RCP average of the state put Biden’s advantage at more than eight points at the time. There was no trend towards Trump back then to corroborate their data; rather, it seems that their polls are just exceedingly Trumpy in how they lean. That doesn’t mean they were wrong and everyone else was right, but the June outlier makes you wonder about today’s data.

On the other hand, the secret sauce used by Trafalgar to try to find “hidden” Trump voters is asking people whom they think their neighbors will vote for. The idea is that someone might be more candid about their own preference for Trump if you couch your question in terms of whether someone they know might support him. Is there any method to that madness? According to a new study, yes.

A new online study finds that Republicans and independents are twice as likely as Democrats to say they would not give their true opinion in a telephone poll question about their preference for president in the 2020 election. That raises the possibility that polls understate support for President Donald Trump.

Some 11.7% of Republicans and 10.5% independents said they would not give their true opinion, vs. 5.4% of Democrats, according to the study by CloudResearch LLC, a Queens, N.Y.-based company that conducts online market research and data collection for clients. Among the reasons they gave was that “it’s dangerous to express an opinion outside of the current liberal viewpoint,” according to Leib Litman, the co-chief executive officer and chief research officer…

Political party preference was the only characteristic that correlated consistently with reluctance to share presidential preference, Leib says.

Are we sure that cuts entirely in Trump’s favor, though? Given the extent to which Republicans are expected to show “loyalty” to Trump, are GOPers telling pollsters they support Biden when secretly they support Trump or are they telling them they support Trump when secretly they support Biden? Remember that a lot of anti-Trump righties have become independents (or Democrats) over the last four years, leaving self-identified Republicans a much Trumpier group generally. Why would people who’ve stuck with the party through the Trump era, who are willing to tell pollsters they’re Republicans, *not* be willing to admit that they’re supporting the president?

Anyway, I don’t think we need to obsess over whether Trafalgar is right that Trump’s ahead at the moment in Michigan or if they’re merely overstating a real trend towards him there across multiple polls. The plain truth seems to be that he’s gotten back in the race and is in striking distance as the campaign enters its most intense stretch. That’s all he could have hoped for after the summer he’s had. And a convention bounce really might nudge him into the lead.

Since we’re on the topic of polls that got it shockingly right (or more right than most) in 2016, though, I’d be remiss if I didn’t share the latest data from USC Dornsife. Their poll is a little different from others in that they’re re-polling the same group of people periodically instead of taking different random samples of the population each time. In 2016, they had Trump ahead for most of the race while other pollsters were showing big Clinton leads. Their final survey had it Trump 46.8 to Clinton 43.6. Which, er, isn’t exactly “correct” since Hillary, not Trump, won the popular vote, but they did at least detect somehow that Trump’s support might be stronger than most of the rest of the polling field believed. USC just started publishing its 2020 polling and today’s new numbers have the race … Biden by 12. He’s gained a few points since last week too, suggesting that he might have gotten a modest convention bounce after all. How does that square with Trafalgar’s Michigan data?

Oh, by the way: Biden announced today that he’ll hit the campaign trail after Labor Day, with expected stops to include Wisconsin and Minnesota, a state that Hillary won four years ago. It’s a safe bet that Michigan’s on the list too, especially in light of the new polling.

Wolf Blitzer Gets Sen. Blumenthal to Eat His Own Words on Alleged ‘Illegitimacy’ of ACB Nomination (Watch)