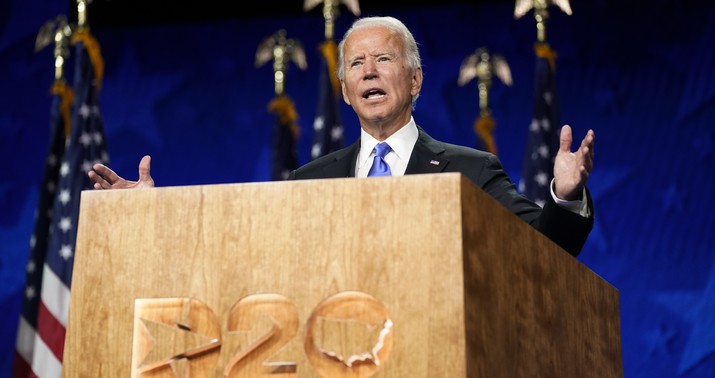 I think most people expected this, if only because of the convention format. How excited can voters get about a preachy eight-hour Zoom call?

But there are ways to read this that are more encouraging for the GOP. And also ways that are less encouraging.

Both polls contain evidence that voters’ opinions of Biden improved thanks to the soft-focus biographical stuff the convention emphasized. Biden’s favorability rose to 51 percent in Morning Consult’s survey, a single-day high for him, while in YouGov’s poll the share of voters who said they felt more positive about Biden afterward versus more negative split 54/24. (Among independents it was 45/30.) Before the convention Democrats split 49/29 on whether they were backing Biden to defeat Trump or because they like Joe personally; after the convention that split was nearly even at 42/38. A third poll, from ABC, also found Biden’s favorability rising, from 40 percent before the convention to 45 percent now.

And yet, it didn’t mean anything to his lead over Trump. How come?

The Republican-friendly spin is that the convention was a big whiff for Democrats. Yes, it was slickly produced and Michelle and Barack and Sleepy Joe all gave fine speeches, but in the end no one cared. No one had anything much to say beyond “Trump evil, Joe good.” The Dems had a golden opportunity to nail down the election by making the case that they’ll do more for the working class on jobs, on crime, and on the pandemic. Instead they resorted to an extended argument that Orange Man Bad. Americans already know that Orange Man Bad, though. What swing voters are mulling is whether Orange Man might do more to improve their lives over the next four years than Democrats would, despite his badness. We’re electing a president, not a pope. Liberals forgot that and so they failed to build on their advantage. America’s had nearly 50 years to come to a conclusion on Biden’s character. What information did last week really add to that?

The less Republican-friendly spin is that Biden’s numbers didn’t rise because, realistically, there’s no way for them to go higher. They’re stratospheric by the standards of modern presidential elections. He’s averaging 50 percent at RCP today, a number Obama never once reached against Mitt Romney during the 2012 campaign. And he’s doing it in a country that’s even more hyperpolarized than it was eight years ago. Viewed that way, the convention was a major success because it didn’t hurt Biden. He had nowhere to go but down; he didn’t go down.

The neutral spin is that the race remaining static tells us something we already knew, namely, that the election is a referendum on Trump. That’s both good and bad for the GOP. If it doesn’t matter what Biden says or does, if it’s all down to the president giving voters a reason to reelect him, then he controls his own fate. A solid performance down the stretch, with COVID receding and the economy growing, might carry him to 2024. The flip side of that, though, is that Trump is too erratic to perform solidly for a sustained period of time. The party wants to give voters a meaningful choice between its vision for the country and the Democratic vision, with this week’s convention aimed at presenting the Dems’ vision as one of high crime, high taxes, sustained economy-killing lockdowns, open borders, and so on. If voters approach the election as a choice then Trump simply needs to be a little more appealing than the Democrats. If they approach it as a referendum then Trump needs to be appealing, period. The former’s easier than the latter.

The real suspense has to do with whether Trump will see a bounce next week, not whether Biden’s seeing one now. If he does then the GOP may have succeeded in turning this into a “choice election.” If he doesn’t then the convention failed — either because Republicans didn’t make their case well or because opinions of Trump are so baked-in at this point that practically nothing can change them. Which would be ominous, given the state of the polls.

Speaking of economy-killing lockdowns, Republican strategists told the Washington Examiner that they think Biden just made his first serious mistake of the campaign.

“I have to stop everything and start writing ads against Democrats with ‘I would shut it down,’” Republican media consultant Brad Todd said Friday evening, soon after a clip of Biden’s interview aired. “This is the biggest break of the year for Republicans in this campaign year.”

Trump noticed Biden’s remarks as well, suggesting the Democratic nominee’s position could become a subtheme of this week’s four-day celebration of the president’s renomination. Trump tweeted, “Despite biggest ever job gains and a V shaped recovery, Joe Biden said, ‘I would shut it down,’ referring to our Country. He has no clue!”

I wrote about that on Friday. Lockdowns poll surprisingly well outside the GOP, not because anyone enjoys seeing commerce slow to a crawl but because the public prioritizes containing the virus over reopening for business and has said so for months. No one is truly “pro-lockdown” but lots of people are in favor of doing whatever needs to be done to drive down community spread to a safe-ish level. That’s why Biden said what he said. He’s drawing a contrast with Trump to reassure voters that he puts safety first and will listen to his experts. It’s possible that endorsing lockdowns will come back to haunt him: If COVID slows down this fall and the sluggish economy overtakes it as voters’ top concern — and it might, given the stalemate on a new stimulus — then being pro-lockdown may be heavy baggage.

But every scientist who’s forecasting what the pandemic will look like this fall seems to believe it’ll get bad as the weather cools down. Trump’s own CDC chief said not long ago that we could be facing the biggest public-health disaster in the country’s history in a few months if we don’t diligently follow precautions like wearing masks. The worse the pandemic gets, the more receptive voters will be to a “safety first” message. Which would make Biden’s lockdown comment, however unrealistic, more of an asset than a liability.

I’ll leave you with this, from the YouGov poll. If the choice is between a party that will lock down on scientists’ advice and a party in which 57 percent think 170,000+ dead is an “acceptable” outcome, I know which way I’m betting.

Gun Control Groups All But Acknowledge Their Cause Is Losing

“We’re not going down that road again.” Well…

Is tonight’s debate over before it begins?

Back to your neutral corners, gentlemen

NYC Board of Elections: Sure looks like we’ve screwed up mail-in balloting … again

“What about the people who have already sent in their ballots?”

The truth is out there, but not as far away as you might think

CBS: Sources close to WH worried about a “grift mill” during lame-duck session if Trump loses

Their way or the highway to ruin