GOP passes new party “platform”: Whatever Trump wants to do 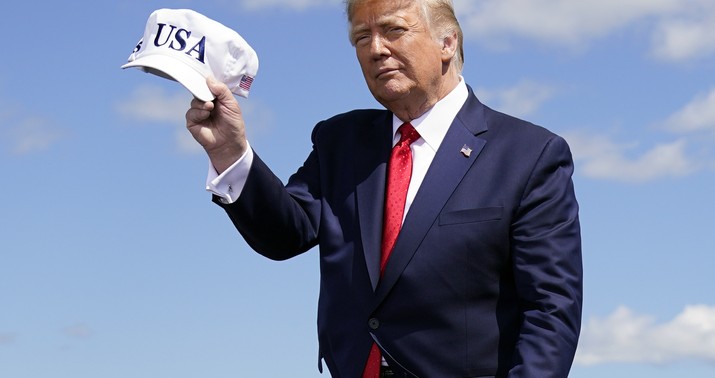 I don’t know why they went through a song-and-dance here about the pandemic limiting their ability to confer and draft a proper party platform. “Whatever Trump wants to do” is a perfectly accurate statement of what the party’s base thinks the GOP agenda should be.

It is *not*, perhaps, an accurate statement of what the party’s leadership thinks the agenda should be. More on that in a second.

The typo in “RESOLVED” near the end really rounds off the feeling of phoning it in. If the party’s a prisoner to Trump’s whims (or more specifically, a prisoner to the base’s support for Trump’s whims), why even bother proofreading this enabling act? Just dash it off and file it. It would have been better if the sum total of the statement were just the words “Whatever Trump Wants” in Comic Sans.

Trump’s campaign announced his second-term agenda in a statement last night, which presumably is now incorporated as the GOP platform. Some of it is important and doable (a COVID vaccine by the end of the year), some of it is aspirational and not doable (term limits for Congress). The closest thing to a true organizing vision for the next four years is ending American reliance on China, which calls for repatriating lost jobs and “holding China responsible” for its role in spreading COVID. “Informal Trump advisers like Rove and former Gov. Chris Christie have been telling Trumpworld both publicly and privately for months that the president must develop more serious second-term plans in order to win reelection,” Politico reported this morning, noting the numerous times Trump has whiffed in interviews after being asked what his second-term program would be. The president now has something concrete as the GOP convention begins.

I wrote a few days ago that the glaring deficiency in the Democratic convention was how thin on policy it was. Lip service was paid to lefty priorities, but the unmistakable takeaway from four days of messaging was “America can’t cope with this insanity for four more years.” Ironically, that’s given Trump a chance to counter with policy specifics at his own convention, articulating for voters exactly what he hopes to do for them. The party that’s operated as a cult of personality for four years has a sudden, timely opportunity to get a leg up on the opposition on policy.

The trick at the convention will be balancing the policy pitch to swing voters with the culture-war pitch to base voters. Tim Alberta asked various Republicans what the GOP stands for now and got this response:

“Owning the libs and pissing off the media,” shrugs Brendan Buck, a longtime senior congressional aide and imperturbable party veteran if ever there was one. “That’s what we believe in now. There’s really not much more to it.”

With Election Day just a few months away, I was genuinely surprised, in the course of recent conversations with a great many Republicans, at their inability to articulate a purpose, a designation, a raison d’être for their party. Everyone understands that Trump is a big-picture sloganeer—“Build the wall!” “Make America Great Again!”— rather than a policy aficionado. Even so, it’s astonishing how conceptually lifeless the party has become on his watch. There is no blueprint to fix what is understood to be a broken immigration system. There is no grand design to modernize the nation’s infrastructure. There is no creative thinking about a conservative, market-based solution to climate change. There is no meaningful effort to address the cost of housing or childcare or college tuition. None of the erstwhile bold ideas proposed by the likes of Newt Gingrich and Paul Ryan—term limits, a balanced budget amendment, reforms to Social Security and Medicare, anti-poverty programs—have survived as serious proposals. Heck, even after a decade spent trying to repeal the Affordable Care Act, Republicans still have no plan to replace it. (Trust me: If they did, you’d hear about it.)…

When I called one party elder, he joked that it’s a good thing Republicans decided not to write a new platform for the 2020 convention—because they have produced nothing novel since the last one was written. Trump and his party have relied more on squabbles than solutions in delivering for their base. Even some of the president’s staunchest supporters concede Buck’s point in this regard: The party is now defined primarily by its appetite for conflict, even when that conflict serves no obvious policy goal.

There’ll be chatter onstage tonight about jobs and China but the meat of the proceedings will be “bemoaning media bias, denouncing the obstructionist Democrats, cursing the unfair timing of the coronavirus, decrying their loss of culture, rebuking corporate America for kneeling at the altar of social justice and accusing the Deep State of stacking the deck against them,” as Alberta puts it. Which is fitting: The party’s platform is “Whatever Trump wants” and grievance-airing is what he wants. It’s the absolute core of his political persona.

But is the GOP’s platform really “Whatever Trump wants”? Judging by the first two years of his presidency, it’s more like “Whatever congressional Republicans want”:

When there’s no platform, agenda control becomes paramount. Maybe Trump will set the agenda if he wins a second term, or maybe other actors will outmaneuver him again.

Unified Republican control of government brought us tax cuts for higher earners as its signature achievement, something very far afield from Trump’s populist program in 2016. There are policies in which Trump takes an intense personal interest — tariffs are the obvious example — but most of the time he’s fine with whatever Congress wants to do. He’s not the one adamantly opposed to a new multi-trillion-dollar stimulus relief deal; that’s fiscal conservatives in the Senate. He didn’t balk when Congress handed him a gigantic spending package in 2018; he signed it, despite complaints from some righties about the pricetag. “Whatever Trump wants” is a nice slogan for the party to show off to the base, since so many of them worship Trump, but Trump’s own S.O.P. is frequently “Whatever Republicans in Congress want.” The GOP will take that deal, nominal subservience to the president’s whims in the expectation that the party establishment will continue to control (most of) the legislative agenda.

Liberal America Had an Epic Meltdown Over Ruth Bader Ginsburg’s Death, But They Have Only One Person to Blame