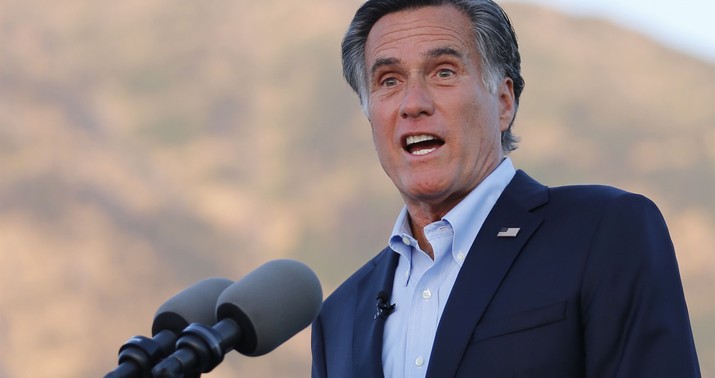 Let me remind you up front that these same two creatures scrambled to congratulate the QAnon crank who won the primary in their state’s 14th District a few days ago, and not without reason. A source told the Dispatch that “around a quarter of the 76,000 voters that turned out for the runoff in northwestern Georgia were QAnon-adjacent, and insinuated Republican leadership is afraid of alienating this growing base of support.”

Kelly Loeffler and Doug Collins are battling for the pro-Trump populist vote in Georgia’s special election over Loeffler’s Senate seat and they realize that a meaningful, potentially decisive percentage of that vote is also pro-“Q.” So they pandered to whom they needed to pander to, even though in this case that particular pander makes them both unfit for office.

As we get closer to the election, we’ll start taking bets on which of them is the first to say “where we go one, we go all” at a Senate debate.

In the meantime, any politician who’s frantic enough to earn populist cred that they’ll slobber over a Q-bot is certainly eager enough to earn it by dumping on Romney, the one Republican who voted to remove Trump at his Senate impeachment trial. Loeffler and Collins have been at that for months, in fact, with Collins reminding Georgia voters in February that Loeffler and her husband donated big bucks to Romney’s 2012 campaign. A desperate Loeffler responded to that by attacking Romney noisily for his impeachment vote, notwithstanding her prior support and the fact that she’s every inch the same sort of filthy-rich business-class Republican that Romney is.

.@MittRomney is blocking former FBI Director James Comey and former CIA Director John Brennan from answering for their illegal surveillance of then-candidate Trump and the Trump Campaign under the Obama administration.https://t.co/sqRhEFf8Dh

.@MittRomney was the original Never Trumper in 2016, he voted to impeach President Trump earlier this year, and now he's actively working to coverup the Obama administration's corrupt efforts to take down @realDonaldTrump before he ever stepped foot in the White House.

Kelly won’t answer the question because she doesn't want Georgians to know the truth: @KLoeffler and @MittRomney are cut from the same Never Trump cloth – two self-funders putting self before country.

The answer to “Why Romney but not Trump?” is “Because Trump is grossly unfit for office and Romney isn’t,” but Loeffler can’t give that answer — in public, anyway. So she was left to resort to this, which had the entirety of political Twitter scratching its collective head:

Click the images and you’ll find old tweets from Collins touting his support for Romney in 2012, which makes him … like nearly every other Republican in America. Fun fact: Romney 2012 earned a higher share of the Republican vote, 93 percent, than Trump 2016 did with 88 percent. Donald Trump endorsed him too, if memory serves. And of course, virtually all of the Republican voters in Georgia who’ll be casting ballots for Senate this fall also cast their ballots for Romney. Again, the point of Collins’s critique is that Loeffler supported Romney but not Trump, not that she supported Romney.

Rather than just take that hit and move on, she walked right into this:

Is Kelly Loeffler attacking @CollinsforGA because he supported Mitt Romney over Barack Obama?

I’m guessing she didn’t vote for Obama after cutting checks worth $1.5 million for Romney, but one would be forgiven for drawing that conclusion given her weird criticism of Collins.

We can laugh at her for being an awkward phony populist all we like, but don’t laugh too hard. Per the latest polls, it’s working for her:

That’s the second poll in a row in which she’s led Georgia’s jungle primary. (That’s where candidates from all parties compete and the two highest vote-getters proceed to a runoff, unless someone clears 50 percent.) Not only is Collins nine points behind now, he’s tied with the top Democrat and thus would be at risk of missing the runoff if the election were held today. Peek through the crosstabs and you’ll find that Loeffer leads with all of the groups whom you might guess would support Collins: Among Trump voters, it’s 55/30, among “very conservative” voters it’s 50/30, among rural voters it’s 37/23, among voters making less than $40,000 per year it’s 26/11. Whether she owes her lead to pure name recognition by dint of her bottomless advertising budget or to her crafty yet cynical attempt to pick a fight with the WNBA over “Black Lives Matter” slogans, I don’t know. But she’s done better than I would have guessed so far in holding off Collins’s populist charge, partly by being a not very convincing but apparently convincing enough pretend-populist herself.

The X factor will be whether Trump blows her up by endorsing Collins down the stretch — remember that he favored appointing Collins to Georgia’s vacant Senate seat before Gov. Brian Kemp went with Loeffler — or whether he holds his fire due to McConnell begging him to or because Trump himself concludes that Collins just doesn’t have enough organic support to make him a safe bet.

I’ll leave you with this.

It’s easier to be a Q believer or 9/11 truther in today’s GOP than it is to support Mitt Romney.

Florida Man Friday: I'm Begging You to Never Pose as a Cop and Pull Over a Cop (Again)

The clock is ticking …

No, America doesn’t need international observers for the election

You can’t have it both ways, congresswoman

Texas re-opening continues for most businesses, but not this kind of business…

Biden on fracking: I won’t close it down, but I won’t let it continue either

In New York, another statue of the Blessed Virgin Mary torn down… on video

Lindsey Graham boxes himself in: Yeah, I think Trump should release his tax returns