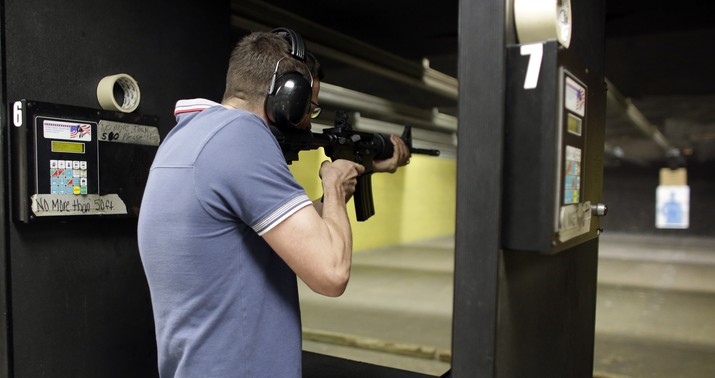 It’s so disorienting for political junkies of a certain age to hear news of a landmark ruling on gun rights from the Ninth Circuit — and then discover that it came out the right way. This is Stephen Reinhardt’s old court, the most reliably liberal circuit in the country.

The president with the most appointees on the Ninth Circuit who are active right now is Trump, with 10. The two judges who made up today’s majority were a Bush 43 appointee and a Trump appointee, Kenneth Lee. Lee was confirmed last year by the Senate to replace — you guessed it — Stephen Reinhardt.

Righties haven’t been feeling great lately about their Trump 2016 judicial dividend thanks to Neil Gorsuch’s ruling in the Bostock case, but this should raise everyone’s spirits. Via the Free Beacon:

“California’s near-categorical ban of [large-capacity magazines] strikes at the core of the Second Amendment—the right to armed self-defense,” Lee wrote in the opinion for the court. “Armed self-defense is a fundamental right rooted in tradition and the text of the Second Amendment. Indeed, from pre-colonial times to today’s post-modern era, the right to defend hearth and home has remained paramount. California’s law imposes a substantial burden on this right to self-defense.”

The majority took issue with the state’s definition of “large-capacity,” pointing out that the magazines the state sought to ban and confiscate are standard in the most popular firearms on the market. It argued the law was too expansive and would make criminals of law-abiding residents who merely possessed a gun magazine in common circulation.

“The ban makes it criminal for Californians to own magazines that come standard in Glocks, Berettas, and other handguns that are staples of self-defense. Its scope is so sweeping that half of all magazines in America are now unlawful to own in California. Even law-abiding citizens, regardless of their training and track record, must alter or turn over to the state any [large-capacity magazines] that they may have legally owned for years—or face up to a year in jail.”

The fact that California’s law sought to ban magazines of more than 10 rounds is key to the decision. Under the Supreme Court’s Heller precedent, it matters whether a weapon is in common usage or not. A state can regulate unusual weaponry; a ban on magazines of, say, 25 rounds might conceivably work. But the closer a gun and its accessories are to the core right of self-defense in one’s home, the stronger one’s Second Amendment right to possess them is. Lee’s opinion highlights not just the enormous number of magazines that hold more than 10 rounds in circulation in the U.S. (they come standard at higher capacity in most Glock models, he notes) but their historical pedigree, with even some antique weapons capable of firing more than that.

Why couldn’t someone defend their home with a magazine smaller than 10 rounds, though, one might ask? Why do you need a 17-round magazine to take down a burglar? Lee answers:

Right, but we do distinguish between protected and unprotected speech under the First Amendment. We don’t tell people they can read the Times but not Breitbart but we do say that defamatory material published by either is actionable. We don’t criminalize pornography but we do criminalize child pornography. We don’t send people to prison for making idle threats (“I’m going to kill you!”), but say that same sentence to a politician in a signed letter with some white powder in the envelope and you might be going away for a few years. Is the difference between a low-capacity and a high-capacity magazine the difference between the NYT and Breitbart, or is it the difference between protected speech and speech that’s so destructive that we make an exception to the First Amendment in order to regulate it? Is a magazine with more than 10 rounds so unusually dangerous that it should be treated differently for constitutional purposes than one with 10 rounds or less?

But that’s not how Second Amendment analysis works, Lee explains. If a weapon is commonly used, and high-capacity magazines are; and if taking it away would substantially burden people’s rights, and the sheer prevalence of the magazines means that doing so would; then we have a constitutional violation in the works. What’s more, there’s a potential slippery slope here:

The whole opinion is worth reading/skimming if you have time, as he delves into the history of gun ownership and self-defense at length. Note especially the passages on pages 38 and 39 about how gays and racial minorities might have special need for gun ownership. Lee knows most voters in the Ninth Circuit trend blue and won’t appreciate this ruling. He’s trying to reach them where they live ideologically.

Now we wait to see if the state appeals for an en banc rehearing. If that happens, 11 judges from the entire circuit will sit. Given the number of appointments Trump has made, there’s a decent chance that even the en banc panel will lean towards protecting gun rights. The stakes would be high for California:

The panel today used strict scrutiny (just like the district judge). Past 9th Circuit cases used intermediate scrutiny. If an en banc panel decides to apply strict scrutiny or the text, history, and tradition test, all of those old cases would have to be relitigated.

Maybe it doesn’t matter. Two years ago the Third Circuit upheld a similar ban on magazines that hold more than 10 rounds, meaning that we now have a circuit split. And SCOTUS doesn’t like circuit splits. There might be another John Roberts disappointment brewing for righties next summer, or the one after.