Trump congratulates QAnon-er on winning Georgia House primary, because why not 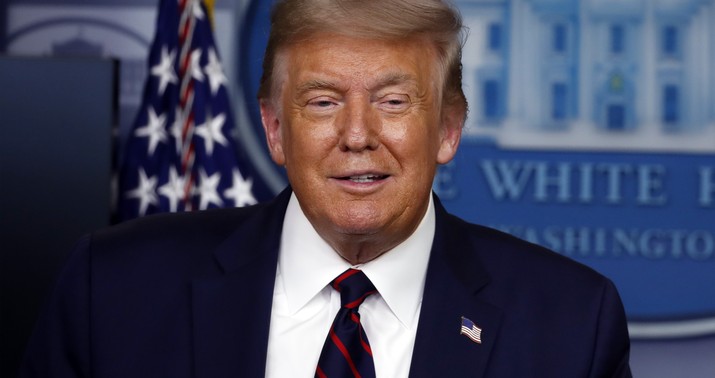 A perfect snapshot of the party circa 2020, and one of those ever more frequent moments that reminds me of Kevin Williamson’s reaction to Trump cinching the nomination in 2016.

Congratulations to future Republican Star Marjorie Taylor Greene on a big Congressional primary win in Georgia against a very tough and smart opponent. Marjorie is strong on everything and never gives up – a real WINNER!

The mystery, as usual, is whether Trump acted from ignorance, because he doesn’t know much about Greene or QAnon, or from malicious intent, because he *does.* I lean towards “ignorance” in this case, partly because his tweet cuts against the wishes of his buddies in the House and partly because it’s potentially destructive to the party’s chances in tight races, especially in Georgia.

“There are a lot of members livid at McCarthy for sitting back and doing nothing to stop this woman from being elected while the entire Georgia delegation, Scalise and some moderates tried” to help her opponent, said one House Republican aide closely monitoring the race. A spokesman for McCarthy did not immediately respond to a request for comment…

Republicans on Capitol Hill have yet to take similar action against Greene, though some did speak out against her when Politico unearthed hours of Facebook videos in which she spewed offensive remarks. In the videos, she said Black people are “held slaves to the Democratic Party” and called the election in 2018 of the first two Muslim women to Congress evidence of an “Islamic invasion of our government.” She described George Soros, the liberal investor and Holocaust survivor, as a “Nazi himself trying to continue what was not finished.”

Those comments met with condemnation from Republican leaders. Emmer said he was “personally disgusted” by her rhetoric. Scalise called her comments “disgusting.” McCarthy’s office said in June he was appalled, though he did not choose a side in the primary.

In fact, Greene said in a recent video interview that McCarthy remained supportive of her.

Greene won the primary in Georgia’s 14th District, which is overwhelmingly red. Democrats will make great hay of her QAnon beliefs there, probably to no avail. But it’s not the 14th District they care about; they’re going to look for ways to make Greene the face of the GOP in districts that are more competitive. “Her winning the primary is the best news Democrats could ask for,” said one senior Georgia GOP official to the Atlanta Journal-Constitution. “Greene’s victory is going to be an anchor around every Republican who is relying on votes in metro Atlanta.” The paper added that “Many Georgia Republicans will now try to distance themselves from her,” which is true — but will be a wee bit harder to do now that the genius leader of the party has promoted her nationally as a “future Republican star.” That’s attack-ad material, gift-wrapped for Dems.

Even if she doesn’t cost the party any seats, as a congresswoman she’s destined to be catnip for a media eager to make her the face of the party nationally and an endless headache for McCarthy, Scalise, and Liz Cheney as she regales the press with her belief that “There’s a once-in-a-lifetime opportunity to take this global cabal of Satan-worshiping pedophiles out, and I think we have the president to do it.” How she’ll modify that belief if Trump is no longer president is an open question; presumably she’ll just resort to accusing Biden of being the leader of said Satan-worshiping pedophilic cabal. Then McCarthy will face the enjoyable decision of how far to distance the party from her. Strip her of her committee assignments? Kick her out of the caucus? Do nothing at all? There are plenty of devotees out there who’ll be unhappy if she’s disciplined. Does the GOP really want to risk losing those sweet, sweet QAnon votes?

Adam Kinzinger, a rare House Republican who does speak up sporadically to criticize Trump, offered this today:

Qanon is a fabrication. This “insider” has predicted so much incorrectly (but people don’t remember PAST predictions) so now has switched to vague generalities. Could be Russian propaganda or a basement dweller. Regardless, no place in Congress for these conspiracies.

We’ll see how his colleagues handle it. My guess is it’ll be the same way they handle Trump’s daily political farts, ignoring them to whatever extent feasible and hoping they go away.

As I say, because Greene is a liability for the party, I lean towards believing that Trump is largely ignorant of who she is and how Democrats plan to exploit her. On the other hand, people were showing up to his rallies in “Q” gear long before the pandemic shut everything down. His own campaign has gotten bolder about playing footsie with the movement lately, recognizing them as a source of money and manpower in an election year. He must have some idea of what she’s about. As a psychological matter, it must be enormously seductive to a grandiose narcissist like Trump to have a cult placing him at the center of their faith, as some sort of heaven-sent crusader destined to liberate children from the forces of Satanic evil. So maybe he knows what he’s doing here, caring more about cultivating people who worship him than helping his party electorally. The movement’s promoters seem to be taking this morning’s tweet as encouragement, at least:

QAnon promoters like Jordan Sather are interpreting it as some form of endorsement/validation. pic.twitter.com/sz70mtxlFz

Lots has been written about the scenario in which Trump loses the election and then spends the next four years asserting his influence over the party from the sidelines, whether as a 2024 kingmaker, a promoter of his own children’s political prospects, a nationalist critic of centrist drifts among the party, and so on. But I don’t think people have taken seriously enough the possibility of him egging on the QAnon-ers in tweets and interviews. No moral scruples would prevent him from encouraging people in a delusion from which he profits somehow; ask the suckers who signed up for Trump University about that. He’s already proved that he’s willing to push other conspiracy theories to gain political relevance per the Birther stuff in 2011. Why wouldn’t he tease the Q-bots by occasionally saying things like, “You have no idea how bad the depravity is, believe me. I wish I could tell you but I can’t right now. All will be revealed soon.”?

Jonathan Last wrote a piece a few days ago about the two theories of Trump-era Republicanism. One is that Trump exposed that Republican voters have different policy priorities (protectionism, immigration restrictionism, isolationism) than their representatives in Congress. The second is that Trump exposed that Republican voters don’t much care about policy but want a champion who’ll prosecute the culture war for them. Last puts it this way:

The Identity Politics Conservatism theory would say that these people don’t care a whit about the policies—they care about who is doing the policymaking. Like old-guard Leninists, their primary concern is: Who? Whom?

In case you’re too young for Lenin, when you go from his original Russian—кто кого опередит?—his bon mot translates as “Who will overtake whom?” And in practice, this was more precisely carried out as “Who will obliterate whom?”

The logic of Identity Politics Conservatism suggests that all of this think tanking and speechifying is—at best—tertiary to what these voters care about. They do not want a new strategy for bringing tech giants to heel.

I’d rephrase it to say that they’re fine with bringing tech giants to heel, maybe even enthusiastic, but *only if* they get Lafayette Park too. That’s the entree, making the libs cry; regulating big tech is the side dish. The rise of Greene in Georgia and the spectacle of Trump heralding her as the future of the party makes me wonder if we won’t end up five years from now with some small but noisy QAnon caucus in Congress to complement the slightly more mainstream Identity Politics Conservative majority. It’ll be a fringy, dystopian version of the Boehner/tea party and Ryan/Freedom Caucus dichotomies of the past decade, with QAnon-ers bellowing that the others are RINOs because they won’t act to stop President Biden from feeding children to his coven of witches or whatever. Although maybe electoral realities prohibit that: If the GOP takes enough of a beating, whether this fall or in 2024, at some point they’ll push a more mainstream product aimed at winning back some of the voters they’ve lost.

Or maybe they’ll just sit back, remind themselves that parties almost never remain out of the majority for long anymore no matter what they’re up to (Ilhan Omar will be back in Congress next year, right?), and just continue to ride whatever tiger they’re riding.

I’ll leave you with this, a reminder that death, sickness, economic misery, and social isolation aren’t the only gifts COVID-19 has given us.

With Marjorie Taylor Greene’s impending service in the U.S. House, this is a good look at how QAnon interest and support spiked as everyone was forced inside by the coronavirus pandemic. https://t.co/J9u1IngtUZ