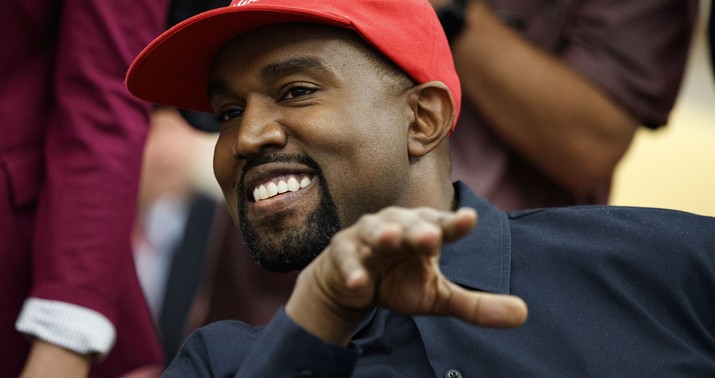 Kanye being Kanye, I find it completely plausible that he arranged a meeting with Trump’s most powerful advisor just to chat him up about a book he liked, not to discuss the ampaign-cay ollusion-cay that he and Trump may or may not be engaged in to try to lure votes away from Joe Biden.

The Times called him up. Kanye being Kanye, he ended up talking about abortion, not the meeting with Kushner.

After an inquiry, Mr. West tweeted Tuesday evening: “I’m willing to do a live interview with the New York Time about my meeting with Jared,” adding that they had discussed a book about Black empowerment called “PowerNomics.” He did not elaborate on his meeting with Mr. Kushner in a brief follow-up interview. He instead expressed anger about abortion rates among Black women and said he didn’t reflexively support Democrats.

What’s confounding about the apparent Trump/West tag-team effort against Biden is that neither one seems competent enough to get it off the launchpad. And so you’re left wondering if they really are scheming to turn Kanye into a 2020 Ralph Nader to Biden’s Al Gore and just doing a piss-poor job of it or if there’s no scheme at all and we’ve simply mistaken Kanye’s delusions of grandeur for some sort of Trumpy conspiracy. Case in point: West’s team turned in his submission to be on Wisconsin’s ballot at 5:00:14 p.m. on Monday. The deadline was 5 p.m. He’s now forced to argue that “5 p.m.” means “anytime before 5:00:59,” never mind that any remotely professional operation never would have left itself in the position of cutting it that close in a crucial swing state. If Team Trump thought having Kanye on the ballot in Wisconsin was important, they would have made sure he got his application in with time to spare, no?

Collusion or not, what’s clear is that some Republican operatives think having West on the ballot will help. Even in … Montana?

A group seeking to place rapper Kanye West’s name on the Montana’s presidential ballot this fall has spent the past few days gathering signatures from Yellowstone County residents, telling them their signature could help take votes away from Joe Biden.

“You want to help Trump?” one of the organizers called out Tuesday afternoon in front of the Yellowstone County Courthouse. “We’re trying to take votes away from creepy Uncle Joe.”

If Montana is close enough this fall that Kanye is a factor in Trump’s victory there, Trump might as well start packing now. It’ll be a bloodbath in the rest of the country. If these guys are worried about a Democratic victory in their state, their organizing efforts are much better applied to turning people out for Steve Daines in the Senate race. That’s the one that might be tight, and on which control of the Senate might turn.

Kanye has published a campaign platform of sorts, most of which is vague and platitudinous even by the standards of campaign platforms. His first item is noteworthy, though: “1. Restore faith and revive our Constitutional commitment to freedom of religion and the free exercise of one’s faith, demonstrated by restoring prayer in the classroom including spiritual foundations.” *If* Trump is hoping to use Kanye as a stalking horse against Biden, that sentence captures the risk inherent in the gambit. West’s faith-filled program could attract some religious Democrats. But it could also attract some religious Republicans who’ve had their fill of Trump and might appreciate a “protest vote” option.

Republicans clearly are hoping he’ll appeal to black voters. If that’s the plan, early polling suggests that it’s not working:

In a new POLITICO/Morning Consult poll, West garnered 2 percent support overall among registered voters, 7 points behind the “no opinion” option. His support among African American voters is just as meager — 2 percent — and Biden’s 9-point national lead over Trump is unmoved with or without West on the ballot…

West is most popular among Gen Zers, a majority of whom will be eligible to cast votes for the first time in November. His favorable ratings with the demographic are at 31 percent. However, 6 percent said they would vote for him.

Younger adults are a bit more open to West’s candidacy than older ones, as you’d expect, but not so much that Biden loses a single percentage point with West in the race. In fact, Kanye takes as many votes from Trump’s party (one percent) as he does from Biden’s. It’s independents, a group which you might expect would be more open to voting third-party, who give him his best number at four percent.

Morning Consult also asked voters if they have a favorable or unfavorable view of him. Which party, do you think, is more likely to say they like a celebrity who’s famously pro-Trump and outspokenly pro-life?

His favorability is literally twice as high among Republicans as it is among Democrats. Among dozens of demographic groups tested, the group that gave him his lowest rating — six percent — was Democratic women, Biden’s strongest base of support. As for African-Americans, they’re only slightly more likely (21 percent) than whites (16 percent) to say they view West favorably. Hispanics are more likely than either group to say so, at 24 percent.

Basically, unless the election’s as close as, or closer than, it was last time, Kanye’s unlikely to matter. But I’m looking forward to squeezing another two and a half months of easy blog content from his candidacy.