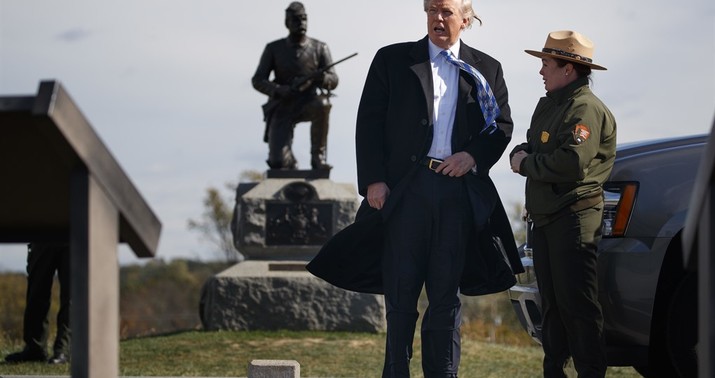 I tossed out Gettysburg as an alternative for him last week amid the complaints about him appropriating the White House as a backdrop for his speech, as it’s unethical for officials to use the public trappings of their office for personal benefit. You would think POTUS might want to avoid that perception considering he was impeached for that reason less than a year ago.

Gettysburg has the sort of near-mythic historical grandeur that would naturally appeal to Trump. In fact, when I made the suggestion I’d forgotten that he’s already spoken there. In late October 2016 he visited and used the occasion to list the things he wanted to achieve during his first 100 days in office. Trump being Trump, he also complained at length about the many women who’d recently emerged to accuse him of sexual misconduct of one form or another. “Total fabrication. The events never happened. Never. All of these liars will be sued after the election is over,” he vowed, a pledge he didn’t keep. He called for unity at the time as well, saying, “President Lincoln served in a time of division like we’ve never seen before. It is my hope that we can look at his example to heal the divisions we are living through right now. We are a very divided nation.” Then he torched all of that:

Trump said the system is “totally rigged and broken” because Clinton has been allowed to run for president, even though he says that she broke “so many laws on so many different occasions.” Trump also implied that what he called rampant voter fraud could cost him the election and said the media was “dishonest.”

“They’re corrupt. They lie and fabricate stories to make a candidate that is not their preferred choice look as bad, and even dangerous, as possible,” Trump said. “At my rallies, they never show or talk about the massive crowd size and try to diminish all of our events. On the other hand, they don’t show the small size of Hillary’s crowds but, in fact, talk about how people are there — very small crowds, you know it, they know it, everybody knows it.”

That was him speaking off the cuff. This time he’ll be fully scripted. I hope.

We have narrowed the Presidential Nomination Acceptance Speech, to be delivered on the final night of the Convention (Thursday), to two locations – The Great Battlefield of Gettysburg, Pennsylvania, and the White House, Washington, D.C. We will announce the decision soon!

CNN's Jeremy Diamond claims without evidence that Trump might have his speech in Gettysburg because he loves the Confederacy: "This is a President who has consistently positions himself as a defender of Confederate symbols and monuments to Confederate generals." pic.twitter.com/cqKxbINsBx

Watching that, you might conclude that reporter Jeremy Diamond had forgotten that the Union, not the Confederacy, won at Gettysburg. But Diamond knows that, as was clear from another clip today. I think his point was that speaking at Gettysburg is destined to refocus public attention to some degree on the fact that Trump has been consistently supportive of Confederate symbolism, be it NASCAR fans waving the rebel flag at races or U.S. military bases retaining the names of Confederate soldiers whom they were named after. (We’re weeks away from the speech and CNN’s doing it right now, no?) At a minimum it’ll give the media a reason to highlight how ironic it is that he’s borrowing the site of the Union’s and Lincoln’s finest hours after spending political capital defending tributes to the enemy they defeated. The jokes — well, one joke repeated over and over — have already begun on Twitter:

I wonder if a speech from Gettysburg would include mentions of how admirable Lee was.

This will be the second time the confederacy tries to take Gettysburg. May it go as badly for you as it did the first time.

Gettysburg would be quite the choice, given the president's recent defense of generals from the side that lost that battle https://t.co/vKbzGaCnrU

He knows his side lost at Gettysburg, doesn’t he? pic.twitter.com/F3wkxIdYdu

That last tweet isn’t from a real North Korean account, just a parody. Even apart from the Confederate stuff, he’s going to get shredded for appearing at a site made famous by the bloody animosity among Americans of the day. Trump could semi-plausibly stand there in 2016 and say that he hoped we could “heal the divisions we are living through right now” because he was just a candidate at the time and an outsider candidate at that, not responsible for the many sins of America’s political establishment. Four years later, he’s become the most polarizing president in modern American history, a guy who touts his approval rating among Republicans rather than the entire electorate, whose own advisors reportedly felt less urgency about building a strategy to contain COVID earlier this year because it was “only” really hammering blue states at the time. Speaking at Gettysburg would tee up the media to highlight how much more divided Americans are now than they were even four years ago and to recite at length the many ways Trump himself has encouraged those divisions.

And of course it gives everyone a chance to laugh at his pretensions to Lincoln-esque stature.

I think he should scrap the White House and Gettysburg and look for something truer to the roots of his 2016 message. If I were him, I’d pick a town or city in Ohio (the one fairly solidly Republican Rust Belt state) and arrange to speak there from the town square. Mike DeWine can help with logistics. Trump could make the case for sticking with him for another term as he continues to prosecute the trade war with China and the effort to bring back American manufacturing jobs. He could also do some “I feel your pain” stuff, however unconvincingly, about Ohio’s and America’s experience with COVID. He’s supposed to be a man of the people, right? Then situate him in a place where the “forgotten man” lives and works. Gettysburg will make him seem ridiculous but Youngstown, say, could underline the message that he grasps that America’s white working class is hurting even if Democrats don’t, or don’t care. Mobilizing those voters is his best shot at winning this fall.