Is Kanye 2020 a stalking horse for Trump? 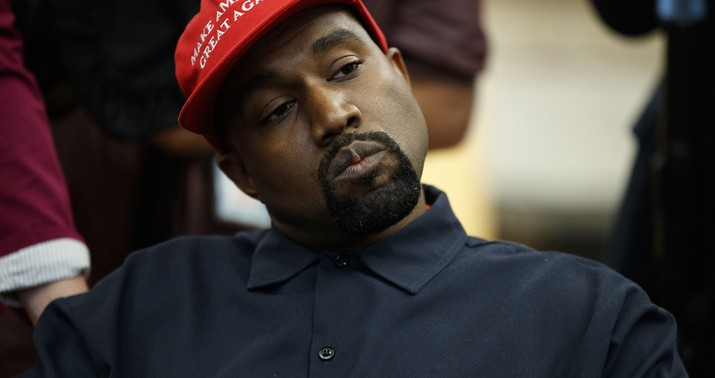 I’m leaning towards “…not really?” as an answer to the question in the headline but I can be persuaded either way.

The case for why West might be a stalking horse is straightforward. Reporters have begun to notice that a lot of Republicans are trying to help him get on the ballot in key (and not so key) states.

At least four people who have been active in Republican politics are linked to Kanye West’s attempt to get on the presidential ballot this year. The connection raises questions about the aims of the entertainer’s effort and whether it is regarded within the G.O.P. as a spoiler campaign that could aid President Trump, even as those close to Mr. West have expressed concerns about his mental health as he enters the political arena…

The nature of the financial relationships between the West campaign and the operatives, if any, was not immediately clear…

Mr. West developed a relationship with Jared Kushner, the president’s son-in-law, after Mr. West’s wife, Kim Kardashian West, worked with the president on criminal justice reform efforts. Mr. Kushner declined to comment, but a person close to him said that while Mr. West had periodically reached out to him, Mr. Kushner hadn’t been stoking a run to divert votes away from Mr. Biden.

There are other Republicans linked to his campaign. In the potentially decisive state of Wisconsin, at least two of the 10 electors whose names West listed in his bid to be added to the ballot appear to be minor Republican officials. Other electors have supported Republicans in the past. A top Republican strategist in Colorado is helping him try to get on the ballot there. (“No, I am not joking, and I realize this is hilarious,” she said in an email to another GOPer, attempting to enlist his help with West’s application.) People “connected to Republican politics” have lent West a hand in some form or another in Missouri, Arkansas, and Illinois as well, according to NBC.

The stalking-horse logic is simple. Trump is behind, he needs to cut into Biden’s vote share, he seems incapable of doing it himself (at least to the degree he’d need to make the electoral college competitive), so he should find someone who can. Reporters and other Democrats are grumbling on social media today that the idea that Kanye might appeal to Biden supporters is racist:

Through line in a lot of this is a really low opinion of black voters + assumption they'll be swayed by the famous guy with no campaign platformhttps://t.co/n5krSX18Ai

Right, if the idea is that black voters will mindlessly gravitate towards a black candidate, we need to reckon with the fact that there were multiple credible black candidates in the Democratic primary this year who got steamrolled by the exceedingly caucasian Joe Biden. On the other hand, even if West doesn’t resonate with black voters, conceivably he could resonate with some young voters, another key Democratic constituency. If you’re 20, not all that enthusiastic about Biden or opinionated about Trump, but feeling like you might vote Dem because most of the people you know are voting that way, maybe West 2020 becomes a place where you park your vote instead. Losing a chunk of apathetic young voters to Kanye could sink Biden in a state where the race is tight.

From a Republican standpoint, what do you have to lose at this point by helping to get Kanye on the ballot? Maybe he’ll hurt Biden on balance, which can only help your party. Or maybe he’ll hurt Trump, in which case — what? Republicans lose the election by eight points instead of seven?

But there’s reason to doubt that Team Trump is pulling the strings on West’s campaign behind the scenes. Even by chaotic Trump standards, the “Kanye 2020” effort is messy and haphazard. If Trump and his brain trust were eyeing West as a stalking horse to siphon votes from Biden, the time to get this effort off the ground was many months ago, to make sure that Kanye would qualify for the ballot in the states where Trump needs him most. Remember, although Trump’s polling against Biden took a tumble this summer, he’s trailed the Democrat all year long — by five points even before the pandemic struck and by more lately. Not until recently, though, did West begin moving in earnest to get on the ballot. He missed the deadlines in Florida, Michigan, and Texas, three states that collectively may decide who the next president is; in New Jersey, he was disqualified because some of the signatures on his petition to be placed on the ballot were, uh, obvious forgeries. I mean, really:

Of Kanye West's 18 electors in Ohio, six appear to live at the same address in Cleveland

We’ll see what happens in Ohio and Wisconsin, where West really could be a factor given how close the outcomes might plausibly be, but don’t be surprised if he’s booted there as well. He has managed to successfully qualify in some states, but they include deep red ones where the outcome isn’t in doubt. Why would he and Team Trump bother trying to get him on the ballot there if they’re in cahoots?

One possible answer is that West is aiming to qualify for the presidential debates. In order to do that, a candidate needs to be polling at 15 percent, which is hiiiiiighly unlikely at any point of this campaign for Kanye, *and* needs to be on the ballot in enough states that he could conceivably win 270 electoral votes. West has missed the ballot deadline in enough states that it’ll be almost impossible for him to reach that threshold at this point, and flatly impossible if he misses California’s deadline later tomorrow.

Long story short, there doesn’t seem to be any method to what he’s doing. I have to believe that even Team Trump has its act together sufficiently that, if they had wanted Kanye as a stalking horse, they would have helped him hurdle these ballot-access obstacles much sooner and more efficiently. What probably happened here is exactly what it looks like: Kanye woke up on Independence Day, decided that he had an itch to run for president, tried to cobble something together, and now Republicans various and sundry are doing what little they can to help him out in the belief that having him in the race would hurt Biden more than Trump, however marginally.

Although I wouldn’t be so sure. A poll taken in mid-July found that when West is added to the ballot, it’s Trump’s numbers that decline (slightly), not Biden’s:

Dave Weigel wonders if that’s because West’s most striking policy position in the interviews he’s given since announcing is his strong pro-life stance. Maybe some righties who are pro-life but anti-Trump are looking for a protest vote. Or maybe there’s a cohort of Americans generally who are looking for an outlandish celebrity outsider to support and now have a celebrity more outlandish than Trump himself on the ballot to vote for. Whatever the answer, under normal circumstances I’d say all’s fair in love and politics and therefore if Republicans want to help Kanye in hopes of taking down Biden, have at it. But given that West is … operating at less than optimal capacity right now, let us say, it feels gross and exploitative. Maybe if he misses the deadline in California, he’ll drop out.