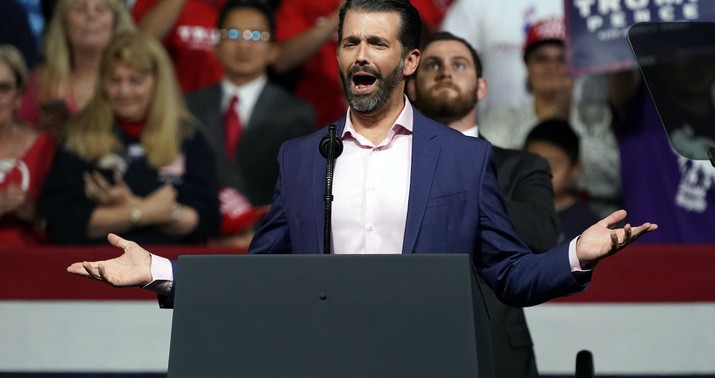 I keep thinking about the fact that the two countries on Earth with the most cases of COVID and the most deaths from COVID are run by strongmen who will not be deterred in their belief that hydroxychloroquine is the key to solving the crisis. Given Trump’s and Bolsonaro’s sponsorship of the drug and their enormous influence over their many millions of supporters, it’s probably the case that more people in the United States and Brazil are using HCQ to treat their illness than anywhere else on the planet. What has it gotten either country? Wouldn’t things be better if people were warned that there’s no panacea if you get infected, therefore the only “cure” right now is strict precautions against getting infected?

But there’s an easy response to that: “Maybe the outbreaks in both countries would be *worse* if fewer were using it.”

Anyway, this all started on social media, where most bad things originate nowadays, when a video of an event staged by “America’s Frontline Doctors” in Washington went viral. “Nobody needs to get sick,” said Dr. Stella Immanuel at the press conference. “This virus has a cure.” The cure, allegedly, is hydroxychloroquine, an unconventional belief among America’s doctors. But then, according to the Daily Beast, Immanuel has lots of unconventional beliefs:

Immanuel, a pediatrician and a religious minister, has a history of making bizarre claims about medical topics and other issues. She has often claimed that gynecological problems like cysts and endometriosis are in fact caused by people having sex in their dreams with demons and witches.

She alleges alien DNA is currently used in medical treatments, and that scientists are cooking up a vaccine to prevent people from being religious. And, despite appearing in Washington, D.C. to lobby Congress on Monday, she has said that the government is run in part not by humans but by “reptilians” and other aliens.

Not only did Immanuel tout HCQ as a “cure,” she claimed it was so surefire that Americans don’t need to wear masks. (“Hello, you don’t need a mask,” the Beast quotes her.) Just a few days ago the governor of Texas touted his mask mandate as a key reason why the state’s cases have begun to decline; a new study says there’s reason to believe that that’s true. Now here was Immanuel encouraging the public not to worry so much about precautions in a clip posted to Facebook by Breitbart that went mega-viral, with help from many of Trump’s prominent friends on the right — Turning Point USA, Diamond & Silk, even Donald Trump Jr. It amassed something like 13 million views in a matter of hours before Facebook decided to yank it as a form of misinformation about COVID-19.

Junior has been handed a 12-hour suspension of his account for his part in it:

Big Tech is the biggest threat to free expression in America today & they're continuing to engage in open election interference – full stop. pic.twitter.com/7dJbauq43O

The president’s retweets of people who promoted Immanuel’s “miracle cure” video have also been deleted. https://twitter.com/numbersmuncher/status/1287952126015143936″>One tweet he amplified alleged that hydroxychloroquine had been suppressed “by Fauci & the Democrats to perpetuate Covid deaths to hurt Trump.” Remember that the better part of the past week had been spent by Trump and the White House on “pivoting” from the absurdly sanguine view of the pandemic held by POTUS over the past four months to a message more in tune with the public mood. We need masks, we’re canceling the convention, we’re doing briefings again, we’re putting safety first: It was a new Trump, someone who finally, finally grasped the seriousness of the problem and was prepared to reckon with it in a serious way.

Within about eight hours last night, he was back to pressuring governors to reopen everywhere and tweeting that hydroxychloroquine is a miracle cure which his own top scientific advisor is working to discredit in order to assist Democrats. There’ll never be a “new Trump.” There’s only Trump.

Here’s a brief recap of where the science stands on hydroxychloroquine right now. There are observational studies pointing in both directions on the drug’s efficacy against COVID-19. The Henry Ford Health System found that it has benefits; other studies found the opposite. But the clinical studies — the gold standard among doctors — seem to point in one direction.

4) here is another earlier HCQ retrospective analysis of 1400 patients in 25 NYC hospitals. Again, no benefit for either HCQ or HCQ+azithromycin sliced 12 different ways. https://t.co/chFU7VEHCJ https://t.co/LxTZ8n9SBM

6) And another May study of #Hydroxychloroquine from New York City in NEJM: from 1376 patients over 22 days, there was NO association between hydroxychloroquine and intubation or death (hazard ratio, 1.04, 95% CI, 0.82 to 1.32). Results robust. https://t.co/HpIHarTx4N

8) For those just arriving here from another tweet thread, note that this trial by Boulware in NEJM was for HCQ and PREVENTION… not for hospitalized, yet still no effect. Reposting from above so bottom/mid-thread arrivers see it: https://t.co/Zh5ot06ExJ https://t.co/oZA6XXaK67

On the other hand, less than a week ago an epidemiologist at the Yale School of Public Health published an op-ed in Newsweek swearing that hydroxychloroquine really is the key to limiting severe cases of COVID based on the data. Give it to patients early, he insisted, and there’s every reason to believe you’ll see bad outcomes melt away. That op-ed has been assailed by critics but Yale’s prestige means the jury on HCQ will remain out for awhile longer despite the clinical data.

The question is why Trump continues to invest in it politically if he’s trying to convince voters that he’s taking the disease seriously now, particularly by promoting a video that discourages basic precautions like masks. He could say something like, “Scientists continue to study it, but in the meantime we should proceed on the assumption that it doesn’t work and do everything we can to limit transmissions.” A cynical Twitter pal speculates that he’s back to promoting HCQ as a coping mechanism, because the reality that the disease isn’t going to “magically” disappear in time for the election has become too unpleasant. Other critics were suggesting last night that this is just a preliminary step in Trump’s habit of finding a scapegoat for all of his political problems. It’s not that he managed the pandemic response badly, he’ll say if he loses in November, it’s that scheming doctors like Fauci deliberately sabotaged an effective response by talking down hydroxychloroquine even though it would leave hundreds of thousands dead. And even though South Korea, Taiwan, Japan, and Europe have managed to get a handle on the pandemic without widespread use of HCQ.

Benjy Sarlin makes a fair point here. It’s true generally that Trump is more a symptom of what’s happened to righties over the past 10 years than a cause, but less true when it comes to the HCQ craze:

It’s always fashionable to say Trump is merely an expression or inevitable result of X or Y broader trend, but there’s probably not a single 2016 rival who would plausibly act on a weird viral video with no vetting that contradicted their own administration. That affects things.

Here’s Fauci on “Good Morning America” today being asked about hydroxychloroquine and specifically Trump’s retweet about him sabotaging interest in the drug. He and the social-media companies that ended up purging the “don’t wear masks, take HCQ” video yesterday have something in common in that each is often left with no good options by Trump’s antics. In the case of Facebook, they’re forced to choose between leaving up a clip that might help propagate the virus by discouraging mask-wearing and between taking sides in a scientific dispute over hydroxychloroquine that remains unresolved among scientists. In the case of Fauci, he’s forced to choose between staying in the job and enduring these petty crankish public insults from his boss and the boss’s supporters and between walking off the job in the middle of a once-in-a-century pandemic while vaccine work is proceeding. A bad outcome no matter what you do.

.@ABC NEWS EXCLUSIVE: Dr. Anthony Fauci speaks to @GStephanopoulos about his response to Pres. Trump’s tweets, how states can avoid COVID-19 surges and why he is “cautiously optimistic” about a vaccine. https://t.co/JgCvhTifYS pic.twitter.com/BOcoCbyrqa