Poll: 77% concerned that crime is rising in major cities 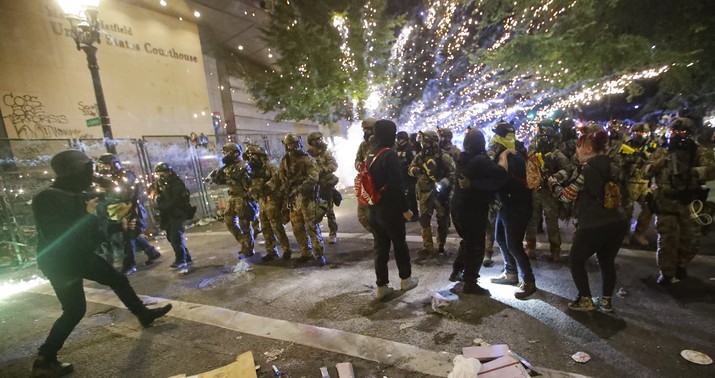 As grim as this is, it’s one of the more encouraging polls for Trump’s reelection chances that we’ve seen in awhile. Barring an increasingly unlikely roaring economic recovery over the next three months, it may represent his one chance realistically at a second term. The only way to take Americans’ minds off the COVID crisis may be with a bigger crisis, one that favors Trump’s skill set, such as it is, more than virus containment does. A breakdown in law and order in American cities could be that crisis.

And amazingly, some lefty droogs seem willing to help him out with it. If you’ve read the front page of our site today you know the situation. Shootings in Chicago. Riots in Seattle. And an ongoing debacle at the courthouse in Portland, with an AP reporter describing in harrowing terms what federal agents are up against, from mortars to arson to lasers being shined in their eyes and damaging their vision. Our list isn’t exhaustive either. On Saturday night in Oakland, “demonstrators set fire to a courthouse, vandalized a police station and shot fireworks at officers,” per ABC.

All of which should favor Trump. He’s the “law and order” candidate, the strongman, a figure who’s not broadly aligned politically with the left’s most violent radicals and the “defund the police” crowd, as Democrats are. If crime starts to surge, it would stand to reason that undecided voters will give him a second look. According to The Hill, the public is indeed worried that crime is surging:

“At the same time they see an increase of violence and crime and are concerned that prosecutors are not prosecuting the crimes — they blame the protests and the high unemployment when asked what is responsible for the spike in violence,” said Harvard CAPS/Harris polling director Mark Penn. “They also single out social media for being used to coordinate violence and in their view not doing much to curb it.”

Strangely, although murder is up in America’s major cities this year relative to last year, violent crime generally is down. (Lockdowns likely had something to do with that.) Also strangely, while it’s reasonable to believe that a breakdown in law and order would favor an authoritarian right-winger for president, the polling lately suggests otherwise. A recent ABC/WaPo survey found Biden leading Trump by seven points when voters are asked whom they trust more to handle crime and safety. That could be a function of Trump’s overall decline in polling amid the COVID crisis, with voters reflexively giving him poor marks no matter what issue they’re asked about. Or it could be a reaction to the fact that this violence is, after all, happening on Trump’s watch. Violence under Biden might conceivably be worse but it’s clear enough that the Trump administration has no panacea for it.

But it’s also possible that Trump’s aggressive response in Portland has convinced voters that he’s making the situation worse, not better. (Pelosi’s awkward new nickname for him makes me suspect Dems have data that supports that.) The White House is barely trying to conceal his enthusiasm in generating scenes for the cameras of anarchist riffraff clashing with federal agents:

The momentum of the protests was fading in many U.S. cities, and confrontations between federal authorities and civilians were becoming less frequent. Then Trump found Portland, according to administration and campaign officials…

Sinking in the polls over his handling of the coronavirus pandemic, Trump seized a chance to appear as a field general in a wider American cultural conflict over racial justice, police misconduct and the reexamination of American history and monuments. In Portland, he found a theater for his fight…

When the fog of tear gas is thickest here in the wee hours of the morning, the president is sometimes up early on the other side of the country, calling Wolf for real-time updates from the front…

One of the officials said the White House had long wanted to amplify strife in cities, encouraging DHS officials to talk about arrests of violent criminals in sanctuary cities and repeatedly urging ICE to disclose more details of raids than some in the agency were comfortable doing. “It was about getting viral online content,” one of the officials said.

The idea that the president might want violence between the state and its most radical elements is one of the more depressing possibilities in a year that’s overflowing with them. It’s not clear why violence surged in so many other cities over the weekend despite a relatively peaceful June and July but maybe the televised spectacle in Portland is feeding the destructive impulse elsewhere. “Inanity Abounds on Both Sides in the ‘Law and Order’ Road Show,” wrote David French recently of Trump’s willingness to get rough and the Antifa brigades’ willingness to accommodate him. The chief inanity is that, because the standoff at the courthouse has become a de facto test of wills between him and the rioters, neither side wants to back off. Trump is actually sending more feds there today to reinforce the Border Patrol units defending the courthouse. If he pulls out, Antifa will have “won.” If the protesters quit, Trump will have “won.” Each side despises the other and doesn’t want to hand them that victory, so neither side will let the other “win.”

The most obvious way to deescalate would be for Portland PD to take over defense of the courthouse and let the feds depart. That would give each side a qualified victory to boast of: Trump could say that he finally forced Portland’s garbage mayor to do his job and defend the city, the rioters could say that they finally chased the feds out of Portland. The mayor himself could say that he got Trump to leave. But Portland PD may not have the manpower to replace the feds, and even if they did they surely don’t want to be on the receiving end of lasers, bricks, molotov cocktails, and so on. So the mayor is content to whine about the federal presence while not doing anything to facilitate an end to it. For a Democratic pol it’s better to be nominally aligned with the Resistance against Trump than to be pitted against them on the other side of the fence around the courthouse.

Here’s a Times video on how the violence has escalated in Portland since the feds arrived. Needless to say, as local civil rights leaders have noticed, none of this has anything to do at this point with George Floyd or Black Lives Matter. It’s just “anarchists gone wild” and the feds occasionally getting a little wild in return.