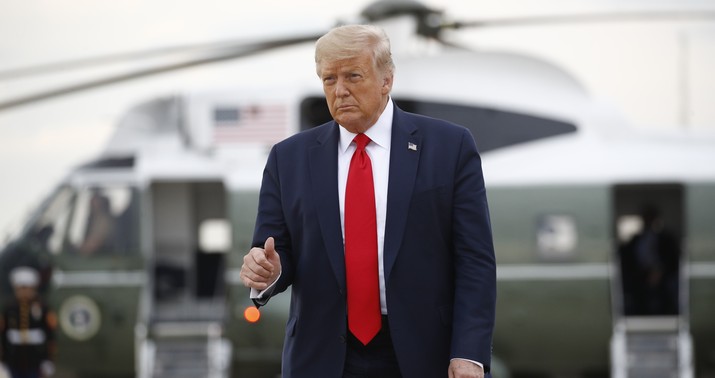 Dave Wasserman of the Cook Political Report made a similar point in a tweet this morning. One way to look at the polling is that Trump is getting spanked nationally right now, trailing consistently by eight or nine points. Another way to look at them is that he’s had the political equivalent of three nuclear bombs dropped on him — COVID, the recession, and widespread civil unrest — and he’s still within single digits of the lead. He doesn’t need to erase Biden’s lead in order to win, either. Getting within three points or so in the popular vote could be enough for him to reprise 2016 and squeak through in the swing states again.

Trump’s numbers atm on Covid & race are absolutely awful. Even so, he only trails Biden by 8% in the 538 average and might only need to crawl back to within 3-4% to win the EC.

Trump was within 3% as recently as *April.* After 216, we should all proceed with some caution.

All he has to do is trim five points off of his current deficit. The question isn’t whether that’s possible — it is, certainly — but whether it’s within his own power to make it happen or if he’s now a prisoner of circumstance relying chiefly on luck. If Trump’s chances depend upon the pandemic receding before November then his fate is in the hands of the pharmaceutical industry and the vagaries of how coronavirus spreads. Silver seems to have a fatalistic view too, framing Trump’s chances of a comeback in terms of the unpredictability of major events, especially in a year as crazy as this one:

.@NateSilver538 says "I do not buy that Trump's fate is sealed" from COVID.

“A lot could change in the next 100 days. Things could get worse for the president. But a turnaround in the COVID situation in the fall could make the election more competitive.” https://t.co/CEC06V3sml pic.twitter.com/E7m1oQUUEO

There are things he can do to help himself. The most consequential electoral story of the past week is that he and his team have finally yielded to what voters want from the White House on the virus. It shouldn’t take four months in a democracy for the chief executive to start saying what his constituents clearly want to hear, but that’s MAGA for you:

Advisers had for days been gently suggesting that the president reconsider his approach, arguing that promoting mask-wearing was patriotic, and Mr. Trump signaled he was ready for a change, the people said.

“It just was a mismatch with the reality on the ground,” said a senior administration official of the White House’s previous lack of high-level, public focus on the issue…

A person in close contact with the White House said there was agreement among White House and campaign aides that the president’s insistence that the economy should reopen was out of step with the concerns of many Americans, who wanted a focus on health and safety…

“They bet on a certain approach and the approach failed, and now he’s adjusting,” said Sam Nunberg, a former Trump campaign aide.

Republicans have told reporters that they credit the pivot to the influence of new campaign manager Bill Stepien. If it’s true that Stepien finally sold Trump on the virtues of a “safety first” message (except for schools?), that’s impressive. What’ll be really, really, really impressive is if he can get him to stick to it for more than a few weeks. That’s another component of the unpredictability Silver describes. How long can Trump go without being, well, Trump?

The polling news this morning bears out his and Wasserman’s belief that POTUS isn’t licked yet. Trump trails in three new swing-state polls from CNN and one from NBC but in only one case is Biden’s lead daunting. That’s CNN’s poll of Michigan, which has him up 12. In Florida he’s ahead by just five points and in Arizona by four; likewise, NBC has Biden ahead by five in AZ. That’s not where Trump wants to be, but these are two prime battleground targets for Democrats in the thick of COVID outbreaks at a moment when Trump’s ratings on the virus have crumbled nationally … and he’s still well within striking distance of winning both. All he might need to make both states highly competitive again is for the coronavirus picture to brighten a bit. All things considered, he’s doing remarkably well at the moment.

The wrinkle in that “glass half full” view of the race is that we won’t know until fall whether the current numbers reflect a verdict on Trump or if they’re an ephemeral reaction to the state of the pandemic in the moment. For instance:

A new poll from The Associated Press-NORC Center for Public Affairs Research also finds Trump’s approval for his handling of the COVID-19 pandemic falling to a new low, with just 32% of Americans supportive of his approach. Even Trump’s standing on the economy, long the high water mark for the president, has fallen over the past few months after seeming ascendant earlier this year…

The AP-NORC poll makes clear the challenge ahead for Trump on that front: 8 in 10 Americans say the country is heading in the wrong direction. That’s more than at any point since Trump took office. The poll also finds just 38% of Americans say the national economy is good, down from 67% in January, before the pandemic upended most aspects of everyday life.

The direction of the country can change, maybe dramatically, before November. That’s Silver’s point. But if it does change, likely for reasons out of Trump’s control, will the reaction be, “We’re back on track so let’s stick with the guy who did so well with the economy until the virus showed up”? Or will it be, “It’s good that we’re back on track but we simply can’t afford to risk muddling through another major crisis with this guy”? Further to that point, a new WSJ poll finds that just 13 percent of voters say they’re still undecided. Fifty percent overall say there’s no chance they’ll vote for Trump versus 37 percent who say the same of Biden. It may be that most voters have already arrived at a verdict on him based on his performance this year and are just waiting to render it in November. If so, “events” that should benefit him politically between now and November may end up not benefiting him as much as we think.

There is one undeniably good thing that’ll happen for him: Biden will be forced out of the bunker at some point, no later than the presidential debates. Anything that reminds voters that they’re not really rendering a verdict on Trump so much as choosing between two flawed candidates is bound to help.