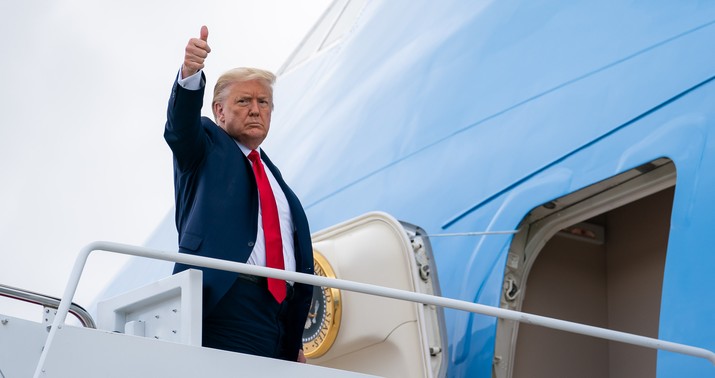 Has the race begun to tighten already?

It’s going to tighten eventually, once Biden is forced to finally drag himself out of the basement. But my guess is that this is more a case of Rasmussen reverting to form than it is evidence of a hidden Trump surge, which would be hard to explain on the merits over the past week. We’d expect a close-ish race from standard Rasmussen polling. Last week may simply have been an outlier for the company.

The new survey finds Trump with 79% of the Republican vote. Biden has the support of 76% of Democrats. Among voters not affiliated with either major party, it’s Biden 44%, Trump 38%. A week ago, Biden had a 12-point lead among independents.

Biden’s lead has been cut in half among indies in a week — and he’s suffering softer support within his own party than Trump is? Hard to square with pretty much any other poll out there. That doesn’t mean Rasmussen’s wrong and everyone else is right, as they nailed the popular vote result in 2016 (but missed badly in the 2018 midterms, notes Mediaite). But it’s hard to reconcile with, for instance, the RCP average of Trump’s job disapproval, which reached its highest point since December 2017 two days ago:

Gaining seven points head-to-head during a week when you pass 56 percent disapproval would be an amazing political feat even by Trump standards.

There’s another reason to doubt the Rasmussen numbers. Earlier this afternoon, Quinnipiac dropped the single worst national poll for POTUS of the entire campaign to date. It’s a poll of registered voters whereas Rasmussen’s is a poll of likely voters, but even so, there’s no way to square the two results. Biden 52, Trump 37, says Quinnipiac:

Independents are a key factor behind Biden’s widening lead as they now back him 51 – 34 percent, while in June, independents were split with 43 percent for Biden and 40 percent for Trump. There is also some movement among Republicans as they back Trump 84 – 9 percent, compared to 92 – 7 percent in June. Democrats go to Biden 91 – 5 percent, little changed from 93 – 4 percent in June…

I wouldn’t get too hung up on the topline numbers. The sample here was 34D versus 24R, and although I’m not an “unskewer” by nature, it’s hard to take that seriously even at a moment when Trump and the GOP are struggling mightily. (Four years ago on Election Day, it was 36D versus 33R.) Still, the numbers here are so bad that Biden would still be up big with a more plausible sample. Go top to bottom with the data and you’ll find that every single question of the dozens Quinnipiac asked produced a result that’s best described as alarming, especially the shift towards Biden on the economy. Either that’s an artifact of the dubious sample or the bottom is falling out for Trump, with a cave-in happening on everything from his economic rating to Confederate statues as swing voters lose confidence in him generally. That’s a November bloodbath in the making.

I won’t go point by point through all of it but look at the numbers on the pandemic, which is the key to everything right now. Ignore the topline. Just check out the splits within specific demographic groups.

He’s lost about 20 percent of his own party on his handling of the virus and he’s getting creamed among independents. (When asked if they trust Fauci, the public splits 65/26, with Republicans at 39/52 and indies at 67/25.) I don’t think much else needs to be said about the state of the race beyond that. But here’s one more related data point: Empathy. Asked if Trump cares about average Americans, independents split 34/64; asked if Biden does, they break 56/35. There’s more involved in those respective assessments than how each man has responded to the COVID crisis, but the crisis makes the empathy contrast between them unusually stark. It’s probably helping Biden a lot on basic popularity measures. He’s not viewed super-favorably (just 39/46 among independents) but the perception of empathy helps drain the acidity from some who dislike him, I suspect. Which may be important.

NBC just dropped a poll of its own as I was finishing up this post but I’m too tired to tackle it. Here’s the topline. Judge for yourself whether Rasmussen or Quinnipiac is more likely to be closer to the true state of the race.

BREAKING: A new NBC News/WSJ poll shows Joe Biden is expanding his lead against President Trump. The former vice president is ahead of President Trump by 11 points. #MTPDaily pic.twitter.com/6QcaT7yHuz