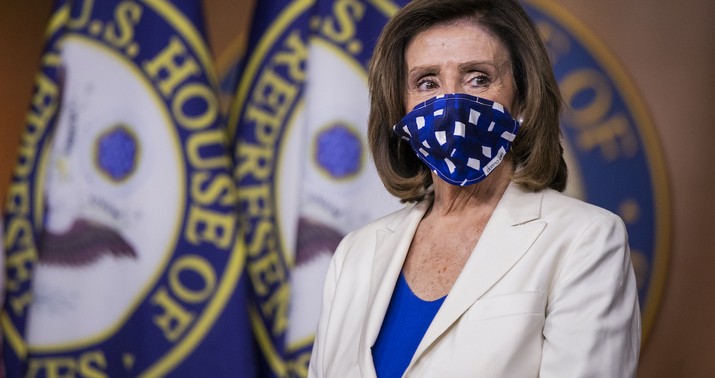 The Sunday shows were all set for another round of COVID-19 coverage this morning until Trump threw them a curveball on Friday evening by commuting Roger Stone’s sentence. Luckily for “State of the Union,” they already had the Speaker of the House booked. Nancy Pelosi will be pressed this morning on how she and House Democrats plan to respond to the president’s dubious clemency for Stone. She’s not really going with this lamebrained idea, is she?

House Speaker Nancy Pelosi on Trump commuting Roger Stone’s sentence: “I’m recommending that we pass a law that presidents cannot issue a pardon if the crime that the person is in jail for is one that is caused by protecting the President, which this was” https://t.co/ZzhLshSw7I pic.twitter.com/WCwCM5Xvq2

Congress can’t limit a constitutional power granted to the president by passing a statute. I’ll give Pelosi the benefit of the doubt by assuming that she knows that and is proposing this because it’s a useful political ploy, not a serious proposal. For one thing, it’ll ease some pressure on the left to impeach Trump again, which Democrats certainly aren’t going to risk doing at a moment when everything’s going their way during their campaign. For another, it gives Dems a way to put pressure on McConnell and Senate Republicans to defend Trump’s commutation, which is destined to be unpopular with the public. Do you agree that the president should be allowed to pardon cronies or will you pass our bill? Pelosi will say. We’re not passing a bill that’s obviously unconstitutional, McConnell will reply. Aha, so you support the president abusing his power to do favors for lackeys who might be able to incriminate him, she’ll answer. Maybe that’s worth something to Dems politically, although I think the public’s likely to ignore anything unrelated to the pandemic right now.

Speaking of which, there are plenty of guests scheduled this morning to discuss America’s rising case counts and what it means for reopening schools eight weeks from now. The star guest is education secretary Betsy DeVos, who’ll be on “State of the Union” and “Fox News Sunday” to make the case that schools must reopen wherever feasible so that students don’t fall further behind in their educations. What about Trump’s threats to withhold funding from states that conclude it’s too risky to reopen right now, she’ll be asked? What about him warning the CDC publicly that their safety guidelines for children and staff are too strict? Good luck to her on spinning those. Elsewhere, Surgeon General Jerome Adams and White House testing “czar” Brett Giroir will chat with “Face the Nation” and “Meet the Press,” respectively, about the outlook on schools reopening and the state of the pandemic in the south and California. Are there any suggestions for flattening the curve in hot spots before hospitals are overwhelmed beyond “wear a mask”?

The full line-up is at the AP.