Michigan Dem warns her party: The polls showing Biden with a big lead over Trump are wrong 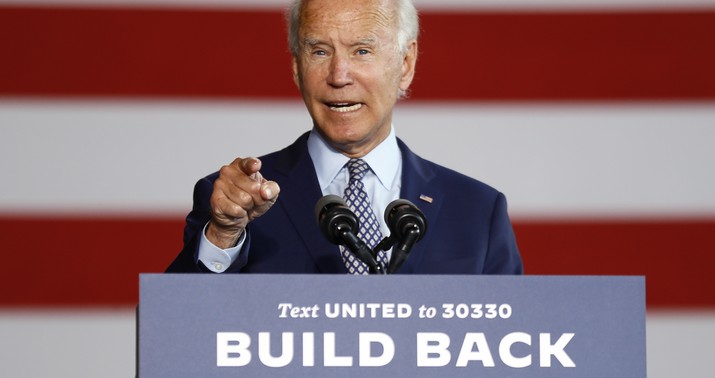 I knew there’d be plenty of poll truthers this summer and fall.

I just didn’t expect a Democratic congresswoman to be one of them.

Part of what she says to Politico reporter Tim Alberta is common sense. Namely, if the polls could underestimate Trump’s support in 2016, they can do it again. Most pollsters are more attentive this year to making sure that white voters without a college degree are properly represented in their samples, as that’s the group that was undercounted in polling four years ago and ended up putting Trump over the top. Now that polling outfits are looking for them, they’re less likely to be undercounted again. But no one knows how many casual voters in that group who typically don’t turn out to vote will go to the polls for Trump this November. There may be more of them out there who didn’t show up in 2016 but are planning to do so in the fall.

Another reason for what she says is Democratic fear of complacency. Every time a new poll drops showing Biden up 10 points, two groups of people scream. One is Republican activists (led by the president himself), who holler, “Suppression poll! They’re trying to demoralize us so that we stay home!” The other is Democratic activists, who holler, “Complacency poll! They’re trying to convince us that the race is in the bag so that we stay home!” I think that’s partly what’s driving Elissa Slotkin’s suspicions here. She’s understandably spooked that her home state of Michigan, which was supposed to be safely blue in 2016, might have another surprise waiting for Democrats. And she has special reason to fear it, as her home district leans slightly Republican (R+4). She was one of the purple-district Dems who swept to victory in the blue wave two years ago. Then she turned around and voted to impeach last year, pissing off the Republican majority in her district. She’s sending a signal here to Democrats in her district: I need every vote on Election Day to survive. Assume nothing based on the polls.

Anyway. Is she right?

“I think they’re inaccurate,” she [says of the polls] without hesitation. “Here’s the thing. When I started to run and I had to hire a pollster, I interviewed a bunch of different folks and I decided to do what we do sometimes at the Pentagon, which is to take a ‘bad cop’ approach to the interview. … It was five or six folks that I interviewed, and I said, ‘You got something wrong. You screwed up in 2016. What did you get wrong? And how are you going to fix it?”

Only one pollster, Slotkin says, admitted that he got it wrong. That was the person—Al Quinlan of GQR, a large Washington-based firm—she hired.

“He told me that they fundamentally undercounted the Trump vote; that the Trump voter is not a voter in every single election, that they come out for Trump, so they’re hard to count,” she explains. “On a survey, if someone says, ‘I’m not sure I’m going to vote,’ you don’t usually continue the conversation. And some of them didn’t have any desire to be on those poll calls; they didn’t have the 20 minutes to talk to somebody. They didn’t want to do it. And so, they were fundamentally undercounted.”

Slotkin, ever the intel analyst—identifying trends, compiling a report, presenting a conclusion—tells me, with a high degree of confidence, “I believe that same thing is happening right now.”

Alberta points to the last month of the campaign in Michigan in 2016 as evidence of just how badly the polls there missed. Trump averaged 41 percent over that period, he tweeted earlier today, and ended up with 47.3 percent on Election Day. A big miss! Which is true, but…

Pay attention to the dates, and remember that the “Access Hollywood” tape dropped on October 8 followed by a barrage of sexual-misconduct allegations against Trump and then the Comey letter about reopening the Emailgate probe on October 28. Throughout the first two and a half weeks of October, Trump was getting creamed. But then Clinton’s lead began to shrink. By November 1, the 10-point leads she enjoyed at the start of October had been cut in half. One poll published the final week had her lead down to four. Then Trafalgar published its bombshell results on the eve of Election Day showing Trump up two. What we’re seeing in that table is a lead evaporate as late deciders swung solidly behind the upstart outsider candidate:

There’s also the fact that the avg actually nailed her share, and in all three of the states you cite there was bigly evidence of a late shift toward Trump: https://t.co/haRBdtWukD https://t.co/q5vAq3ljEz

It’s not that the Michigan polls were wildly off. They detected the trend towards Trump at the end, although only Trafalgar picked up his final surge into the lead. Ultimately the polling average was within four points of the final result. And, as Donovan noted in a separate tweet, most of the polls you see in that table were conducted by local outfits, not big national firms that are well respected for their track records. Prestige pollsters simply didn’t think Michigan was in play in 2016 so they didn’t waste resources on polling it. That same mistake isn’t being repeated this year, needless to say. The New York Times, Fox News, Monmouth, and Quinnipiac have all polled Michigan since February. The most recent poll, the NYT’s, had Biden up 11.

Long story short, although it’s true that pollsters underestimated the share of Trump’s base that would turn out in 2016, it may be nothing more than a late break towards an intriguing outsider by undecideds in the final weeks of the campaign that accounts for the big miss in Michigan and other Rust Belt states. It could happen that late deciders break for him again this November, confounding the numbers a second time, but there’s no obvious reason to think so given the problems bedeviling the country and the weaker degree of animosity Biden inspires in people relative to Clinton. Besides, says Nate Silver, even if Trump outperforms his polling again this year, he’d have to outperform it by a lot — a lot — in light of how things currently stand in order to actually win the election.

If polls underestimated Trump to the same extent they did in 2016 (by ~3-ish points in the average swing state) then Biden would still win MI, WI, PA and FL in an election held today, and AZ, NC, OH and GA would be toss-ups. https://t.co/pJFdwArSHY

Biden would win the election handily if he took the four states Silver identifies. And, Silver added, if there is a big polling miss, there’s no reason to think it would necessarily benefit Trump. In their zeal to make sure Trump’s base is fully represented in samples this time, pollsters may be overestimating how many of them are actually prepared to turn out for him. If Biden leads by four narrowly on the night before Election Day, he could lose narrowly — or win by eight. Right now he leads in Michigan by an average of 7.5 points, which is probably outside the margin of a polling miss.

Here’s the president last night on “Hannity” boasting that he’d taken a cognitive test at some point at Walter Reed hospital and “aced” it. That was … news to most of the country, and raised a bunch of questions. Why did doctors feel obliged to give him a cognitive test? Is that routinely part of his physical? Doesn’t he do his physicals at the White House, typically? Does this have anything to do with that mysterious impromptu visit he made to Walter Reed last November? Presumably not, as he says he took the test “very recently.” The Times is looking for answers and isn’t getting any. But Joe Biden’s now looking forward to debating him: “I can hardly wait to deal with what he refers to himself as — a stable genius.”

Trump on Cognitive Tests: I actually took one.. and I proved I was all there because I aced it… I took it at Walter Reed Medical Center in front of doctors and they were very surprised. They said that’s an unbelievable thing, rarely does anyone do what you just did pic.twitter.com/pwxcjRVL3V