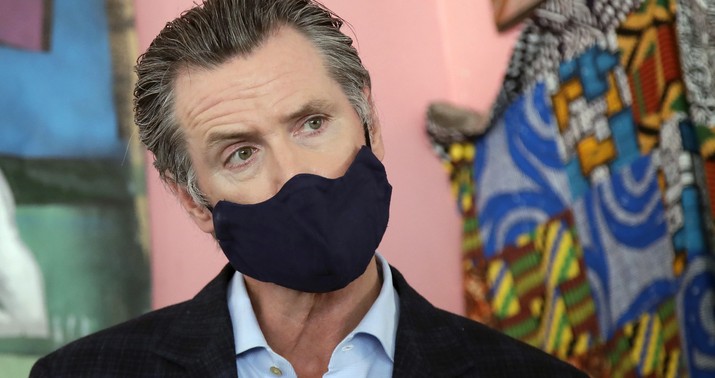 A follow-up to this post from Tuesday is in order in light of last night’s new daily data. “We’re only a week or two away from solving our national mystery about whether an uptick in deaths is merely ‘lagging’ the rise in cases nationally or if something fundamental has changed about the epidemic to make COVID-19 durably less deadly,” I wrote there, although that really shouldn’t have been presented as an either/or. It could be (and maybe is likely to be) that both are true. We’re destined to see some rise in deaths as case counts in hard-hit states skyrocket but maybe nothing like the rise we saw in New York and New Jersey earlier in the pandemic. Doctors have gotten better at treating COVID-19. Some who would have died in April will survive now.

But we may be getting early confirmation of the first part of that analysis. Arizona, Texas, and California all recorded more coronavirus deaths in one of the past two days than they have on any other day since the start of the pandemic.

Public health officials across California reported 151 coronavirus deaths on Wednesday, far surpassing the previous single-day high of 122 deaths set on May 19, according to data compiled by this news organization.

Earlier Wednesday, before the record-breaking number of deaths was reported, Gov. Gavin Newsom warned that people should not let fatigue or an apparently falling mortality rate from COVID-19 obscure “the reality still of hundreds of people across this country dying on a daily basis from this disease.”…

Hospitalizations have been on the rise as well. And the percentage of tests for coronavirus that are coming back positive has been growing: The seven-day average of that rate reached 7.5 percent this week, compared to 4.4 percent a month ago.

Texas recorded 98 deaths, “far surpassing” the previous record (set just a day before) of 60. A day earlier, Arizona recorded 117 deaths, “far surpassing” the previous record of 88. These aren’t modest increases; as a percentage, they’re big leaps. Maybe, hopefully, they’re partial artifacts of the slowdown over July 4th weekend — that is, maybe some counties got backlogged in recording deaths for a day or two and what we’re seeing in the past 48 hours is them clearing those backlogs.

But the national picture suggests otherwise:

There are possibly still some lingering effects from the 3-day weekend, but that isn't that much consolation. There were a total of 2,576 deaths over the 5-day period Saturday-Wednesday, as compared with 2,407 for the same period a week ago.

Deaths are up week over week through Wednesday. Since they’re a lagging indicator of a surge in cases, it’s reasonable to fear that trend will hold for awhile.

POTUS continues to try to convince the public that what they’re seeing right now, as the U.S. sets another record daily high in confirmed cases, is merely an artifact of more testing:

But it’s not true and the rising death toll is evidence. If the total number of infections in the population were stable or declining, with case counts rising simply because we’ve been testing more, we should expect to see hospitalizations and deaths stable or declining as well. In fact, we should expect severe cases of COVID to decline even if the number of infections is steady thanks to improved treatments. The fact that that the hospitalizations graph looks like this…

…is the best proof we could ask for that the number of infections really is rising ominously. It’s not a function of testing. In fact, notes Ari Schulman, the percentage of total tests that are turning up positive has risen over the past two weeks in 37 states. If infections in the population were steady or declining, the opposite would be true as testing increases. As for comparing ourselves to other countries:

Here’s another ominous, and familiar, piece of evidence of a surging epidemic from one of the hardest-hit cities in the country, Houston. There’s a rash of people dropping dead there at home before EMTs can reach them, just as there was in New York City in March and April:

Dr. Peter Hotez, dean of the National School of Tropical Medicine at the Baylor College of Medicine in Houston, said the surge in at-home deaths reflects the nature of the way COVID-19 attacks the body. Early on, he said, doctors were focused on respiratory symptoms, but case studies in New York and elsewhere showed the virus also causes serious heart problems that can lead to sudden deaths.

“And it seems to be happening both early and late in the course of the illness,” Hotez said. “So patients are recovering and then they’ll come home from the hospital and they’ll die. Or they were never diagnosed, and the first manifestation is sudden death. So that’s a very frightening aspect of COVID-19 and why we need to work so hard to slow the spread, because you don’t even get the chance to seek medical attention.”…

Data from the Houston Fire Department shows a 45 percent jump since February in the number of cardiac arrest calls that ended with paramedics declaring people dead upon their arrival at the scene. In March, the department recorded about 250 dead-on-arrival calls, the most of any month in the past two years up until that point. In June, the number grew to nearly 300, more than 75 in excess of either of the previous two Junes. And on July 3, officials said the department experienced the most such calls on a single day in recent memory: 18.

The raw numbers of deaths are much, much smaller than they were in New York, but whether that’ll be true durably or whether it’s true merely at the moment, with vastly higher counts to come, is still unknown. This piece on the various ways doctors have learned to better treat the disease and save lives is encouraging. They’re “proning” patients reliably now to help them breathe, using nasal cannula more for oxygen to try to avert the ordeal of being placed on a ventilator, watching for blood clots that have been known to afflict some COVID patients. They have drugs like remdesivir that have proven to hasten recovery and dexamethasone that have proven to save lives in severe cases. It’s hard to imagine we’d see anything like the death tolls we saw in April and May *if* infections don’t keep growing exponentially.

But if they do, at some point the sheer number of patients should logically produce the scale of death we saw a few months ago. ICUs in hard-hit states are already filling up and spaces like convention centers are being prepared for excess capacity. There are only so many doctors and so much medicine to try to prevent severe cases from turning fatal. Which brings us to a lingering mystery: How many people were really infected in March and April, when testing was abysmal? We’re setting daily records in case counts now but that may be due to the fact that capacity has grown so much over the past two months. If we were testing at this scale when 800 people a day were dying in NYC, how many confirmed daily cases would we have had? 50,000? Or more like 200,000? As ominous as the epidemic looks right now in the south, it may still be just a fraction of what the northeast experienced this past spring.

Go read Derek Thompson’s five theories for why the current death toll, although rising, isn’t exploding. They’re all familiar, especially the fact that infections have been trending younger over the past month, but it’s useful to have them presented side by side.